Age of Distraction: Why It’s Crucial for Students to Learn to Focus 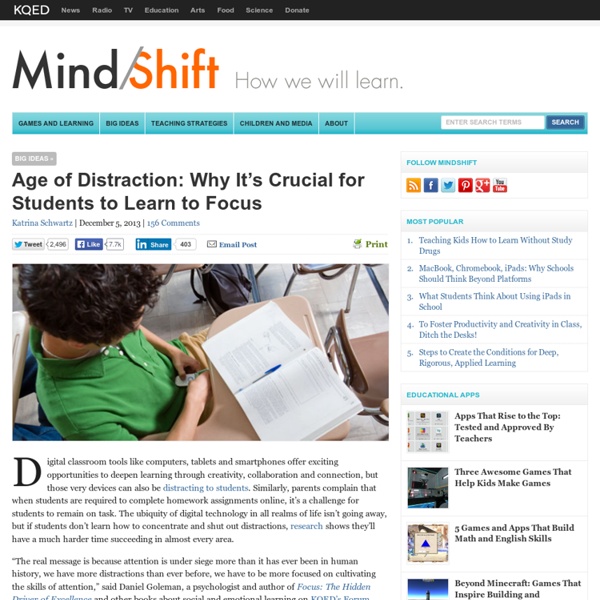 Digital classroom tools like computers, tablets and smartphones offer exciting opportunities to deepen learning through creativity, collaboration and connection, but those very devices can also be distracting to students. Similarly, parents complain that when students are required to complete homework assignments online, it’s a challenge for students to remain on task. The ubiquity of digital technology in all realms of life isn’t going away, but if students don’t learn how to concentrate and shut out distractions, research shows they’ll have a much harder time succeeding in almost every area. “The real message is because attention is under siege more than it has ever been in human history, we have more distractions than ever before, we have to be more focused on cultivating the skills of attention,” said Daniel Goleman, a psychologist and author of Focus: The Hidden Driver of Excellence and other books about social and emotional learning on KQED’s Forum program.

Tackling the Digital Divide: Low-Income Students Weigh In The article For Low Income Kids, Access to Devices Could Be the Equalizer raised the possibility that mobile technology in classrooms could help narrow the digital divide between the nation’s low-income and more affluent students. The article, which included suggestions for educators about how to access devices and what do with them, struck a chord with readers. Many were outraged that some students are missing out on valuable learning resources because of their families’ socio-economic status, while others worried that bringing mobile devices into the classroom – any classroom – invites chaos. “The internet is the modern day encyclopedia,” wrote commenter Patrick Hopkins, who grew up in a single-parent low-income household, and now teaches in an upper-middle class school district. “Teachers must have an abundant amount of trust in their students that they are staying on task when using their own devices in the classroom.” For some readers, it comes back to the issue of trust.

Millennials will benefit and suffer due to their hyperconnected lives Overview of responses In a survey about the future of the internet, technology experts and stakeholders were fairly evenly split as to whether the younger generation’s always-on connection to people and information will turn out to be a net positive or a net negative by 2020. They said many of the young people growing up hyperconnected to each other and the mobile Web and counting on the internet as their external brain will be nimble, quick-acting multitaskers who will do well in key respects. Educational Technology and Mobile Learning: Terrific Mini Guide to Help Students Think Critically December 26, 2014 Questioning is the key to critical thinking and through questions students get to explore the deep layers of meanings that would otherwise go unnoticed. Of course not all questions have this analytical ability. For instance, closed questions tend to limit the thinking choices available for students. The same with questions that promote factual recalling. Questions that emphasize the mechanical on the analytical are out of the list. In today's post, I am sharing with you this mini guide created by Foundation of Critical Thinking which you can use with your students to help them better comprehend and apply critical thinking in their learning.

Classroom Laptop Users Distract Others As Well As Themselves Thursday, April 25, 2013 It won’t surprise anyone to learn that having a laptop computer open in a lecture class is an invitation to distraction for the user. But what about the students sitting nearby? A new study by a group of researchers at McMaster and York universities, both in Canada, finds evidence that laptop use in college classrooms distracts not just laptop owners, but their classmates as well. The researchers begin their article, published last month in the journal Computers & Education, by reviewing what we know about learning while our attention is divided: “Research suggests that we have limited resources available to attend to, process, encode, and store information for later retrieval.

Growing Up Digital, Wired for Distraction By all rights, Vishal, a bright 17-year-old, should already have finished the book, ’s “Cat’s Cradle,” his summer reading assignment. But he has managed 43 pages in two months. He typically favors , and making digital videos. How Does Multitasking Change the Way Kids Learn? Using tech tools that students are familiar with and already enjoy using is attractive to educators, but getting students focused on the project at hand might be more difficult because of it. Living rooms, dens, kitchens, even bedrooms: Investigators followed students into the spaces where homework gets done. Pens poised over their “study observation forms,” the observers watched intently as the students—in middle school, high school, and college, 263 in all—opened their books and turned on their computers.

Kids' Self-Control Is Crucial for Their Future Success Self-control—the ability to regulate our attention, emotions and behaviors—emerges in childhood and grows throughout life, but the skill varies widely among individuals. Past studies have reported that self-control is partially inherited and partially learned and that those with less self-control are more likely to be unemployed, en­gage in unhealthy behaviors such as overeating, and live a shorter life. A recent study in the Proceedings of the National Academy of Sciences USA tying childhood self-control to health and well-being in adulthood suggests that everyone, not just those most lacking the skill, would benefit from a self-control boost. Psychologist Terrie E. Moffitt of Duke University and her team focused on the self-control of a group of 1,037 children born in 1972 and 1973 in Dunedin, New Zealand. The investigators observed the children and took reports from parents and teachers every two years from the ages of three to 11.

With Tech Tools, How Should Teachers Tackle Multitasking In Class? Important research compiled on the effects of students multitasking while learning shows that they are losing depth of learning, getting mentally fatigued, and are weakening their ability to transfer what they have learned to other subjects and situations. Educators as well as students have noticed how schoolwork suffers when attention is split between homework and a buzzing smartphone. Many students, like Alex Sifuentes, who admit to multitasking while studying, know the consequences well. “When I was grounded for a couple of months and didn’t have my phone, I got done extra early with homework,” Sifuentes wrote in response to Annie Murphy Paul’s article, “How Does Multitasking Change the Way Kids Learn?”

Cellphones in school: a teaching tool or distraction? After 20 years of teaching, Miriam Morgenstern is calling it quits this month. The Lowell High School history and ESL teacher is starting an educational nonprofit, although that’s not the only reason she’s leaving the classroom. Another is her frustration with students and their cellphones. Freedom, digital distraction and control Annie Murphy Paul has an excellent article in Slate and this publication this week about the issue of digital distraction while learning. A recently published study by psychologist Larry Rosen found that in a short 15-minute period of observation, teenagers spent only 65 percent of their time studying. Their attention drifted after an average of 2 minutes from reading and writing their assignments to activities like Facebook, texting and instant messaging–and all this was while they knew they were being watched. Digital distraction or multitasking is a modern scourge, not just for young people.

How Do Students Use Their Mobile Devices to Support Learning? A Case Study from an Australian Regional University ^ Ally, M, Grimus, M and Ebner, M . (2014). Preparing teachers for a mobile world, to improve access to education. PROSPECTS, : 1–17, DOI: Alrasheedi, M and Capretz, L F . (2015). Determination of Critical Success Factors Affecting Mobile Learning: A Meta-Analysis Approach. The new marshmallow test: Resisting the temptations of the web By Annie Murphy Paul This story also appeared at: Living rooms, dens, kitchens, even bedrooms: Investigators followed students into the spaces where homework gets done. Pens poised over their “study observation forms,” the observers watched intently as the students—in middle school, high school, and college, 263 in all—opened their books and turned on their computers. For a quarter of an hour, the investigators from the lab of Larry Rosen, a psychology professor at California State University-Dominguez Hills, marked down once a minute what the students were doing as they studied. A checklist on the form included: reading a book, writing on paper, typing on the computer—and also using email, looking at Facebook, engaging in instant messaging, texting, talking on the phone, watching television, listening to music, surfing the web.