For Students, the Importance of Doing Work That Matters 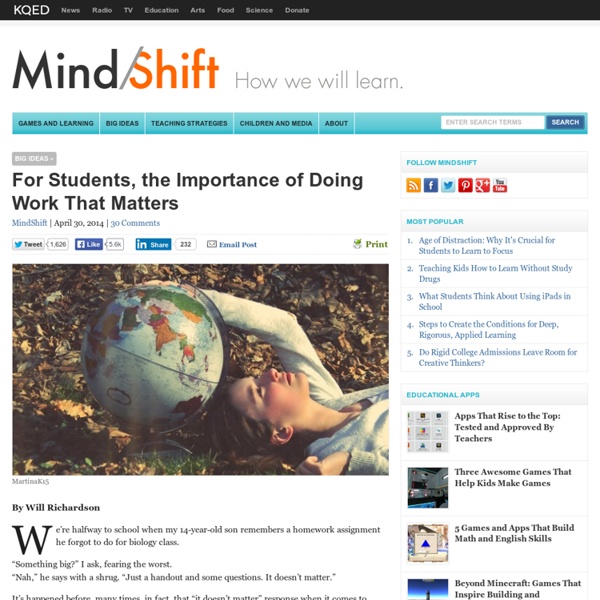 MartinaK15 By Will Richardson We’re halfway to school when my 14-year-old son remembers a homework assignment he forgot to do for biology class. “Something big?” It’s happened before, many times, in fact, that “it doesn’t matter” response when it comes to work both of my kids are doing in school. That’s an especially frustrating reality for me because in my travels to schools around the world I see lots of examples of “work that matters”; high school kids in Philadelphia designing solar panels for hospitals in the African bush; middle school kids in San Diego writing books about their local ecosystems and selling them in local stores; primary school kids designing a new classroom wing being built at their school outside of Melbourne, Australia. “Work that matters” has significance beyond classroom walls; it’s work that is created for an authentic audience who might enjoy it or benefit from it even in a small way. Are these kids outliers? Still, we can start small, can’t we?

Can Free Play Prevent Depression and Anxiety In Kids? Over the past 50-60 years, play time in kids’ lives has been drastically cut. School days and years are longer and parents often schedule enrichment activities for their children instead of giving them space to direct their own play. Children are rarely given the freedom to direct their own activities, leading to a persistent rise in children feeling that they have no control over their lives. Check out his TEDx talk for all the details on this fascinating area of research. Related

Can Free Play Prevent Depression and Anxiety In Kids? Over the past 50-60 years, play time in kids’ lives has been drastically cut. School days and years are longer and parents often schedule enrichment activities for their children instead of giving them space to direct their own play. Children are rarely given the freedom to direct their own activities, leading to a persistent rise in children feeling that they have no control over their lives. And, while correlation doesn’t prove causation, Dr. Peter Gray, who has been studying play for years, says there’s strong evidence that in this case, the decline in play is leading to a rise in depression and acute anxiety among young people. Check out his TEDx talk for all the details on this fascinating area of research. Related

Why so many kids can’t sit still in school today The Centers for Disease Control tells us that in recent years there has been a jump in the percentage of young people diagnosed with Attention Deficit and Hyperactivity Disorder, commonly known as ADHD: 7.8 percent in 2003 to 9.5 percent in 2007 and to 11 percent in 2011. The reasons for the rise are multiple, and include changes in diagnostic criteria, medication treatment and more awareness of the condition. In the following post, Angela Hanscom, a pediatric occupational therapist and the founder of TimberNook, a nature-based development program designed to foster creativity and independent play outdoors in New England, suggests yet another reason more children are being diagnosed with ADHD, whether or not they really have it: the amount of time kids are forced to sit while they are in school. State-based Prevalence Data of ADHD Diagnosis (2011-2012): Children CURRENTLY diagnosed with ADHD (Centers for Disease Control) By Angela Hanscom The mother starts crying. More from Answer Sheet:

Are Multiplayer Games the Future of Education? - Melanie Plenda A new classroom approach tries to bring more competition into the classroom. It was just supposed to be a quick trip to Beijing, a touristy group thing to take in the sights. It wasn't supposed to go down like this. There wasn't supposed to be a lost manuscript; the travelers weren't supposed to turn on each other. The only good, if any, to be found in this godforsaken quest, this unholy mission, was that by the end of it, they would all know how to speak Mandarin. This intricate Maltese Falcon­-like story will unfold each day, over the course of semester, as a multiplayer game at Renssalear Polytechnic Institute in New York. Sheldon is the founder of gamification, a new movement that essentially takes all the things that make video games engaging and applies them to classroom learning. Sheldon discovered gamification by accident. "I got bored very quickly with myself," he says. Everything started turning around. This is why gaming aficionados can sit playing for hours on end.

Heavily Decorated Classrooms Disrupt Attention and Learning In Young Children, According To New Carnegie Mellon Research-Carnegie Mellon News Tuesday, May 27, 2014 Contact: Shilo Rea / 412-268-6094 / shilo@cmu.edu PITTSBURGH—Maps, number lines, shapes, artwork and other materials tend to cover elementary classroom walls. However, new research from Carnegie Mellon University shows that too much of a good thing may end up disrupting attention and learning in young children. Published in Psychological Science, Carnegie Mellon's Anna V. Fisher, Karrie E. "Young children spend a lot of time — usually the whole day — in the same classroom, and we have shown that a classroom's visual environment can affect how much children learn," said Fisher, lead author and associate professor of psychology in the Dietrich College of Humanities and Social Sciences. Should teachers take down their visual displays based on the findings of this study? "We do not suggest by any means that this is the answer to all educational problems. The Institute of Education Sciences, part of the U.S.

5 Simple Office Policies That Make Danish Workers Way More Happy Than Americans You will often see Denmark listed in surveys as the "happiest country on the planet." Interestingly Danes are not only happy at home, they're also happy at work. According to most studies of worker satisfaction among nations, the happiest employees in the world are in Denmark. The U.S.? Not so much. Here's just one data point: a recent Gallup poll found that 18% of American workers are actively disengaged, meaning they are "emotionally disconnected from their workplaces and less likely to be productive." But why are Danish workers so happy compared to their American counterparts? 1: Reasonable working hours I once talked to an American who had gotten a job as a manager at a Danish company. Some non-Danes wonder if Danes ever work. The difference in the U.S. is stark, and many American companies celebrate overwork as a sign of commitment. 2: Low power distance In the U.S., if your boss gives you an order, you pretty much do what you're told. 3: Generous unemployment benefits The upshot

My Daughter’s Homework Is Killing Me - Karl Taro Greenfeld What happens when a father, alarmed by his 13-year-old daughter's nightly workload, tries to do her homework for a week Charles Gullung Memorization, not rationalization. Esmee is in the eighth grade at the NYC Lab Middle School for Collaborative Studies, a selective public school in the Chelsea neighborhood of Manhattan. Some evenings, when we force her to go to bed, she will pretend to go to sleep and then get back up and continue to do homework for another hour. I wonder: What is the exact nature of the work that is turning her into a sleep-deprived teen zombie so many mornings? I decide to do my daughter’s homework for one typical week. Monday By late afternoon, I am tired after filing a magazine article on deadline. So I am relieved when she tells me she doesn’t have much tonight. I am surprised by the amount of reading. But the math is easier than I thought. I then start reading Angela’s Ashes while Esmee studies for Earth Science. So we switch. Total time: 3–5 hours What has changed?