6 Things The Most Productive People Do Every Day 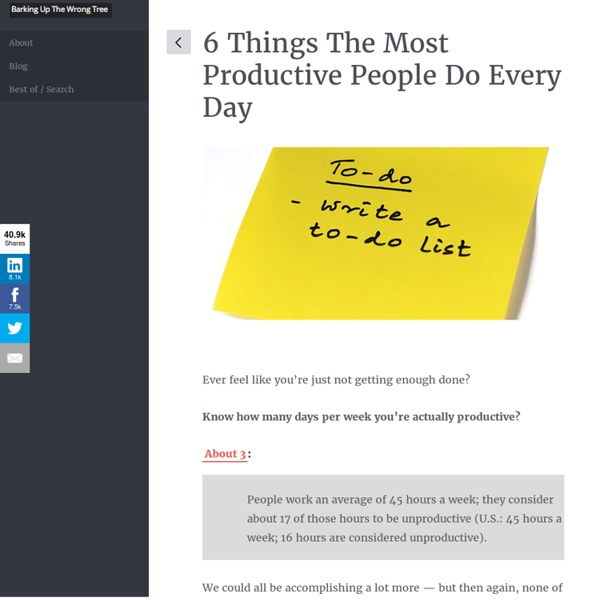 Ever feel like you’re just not getting enough done? Know how many days per week you’re actually productive? About 3: People work an average of 45 hours a week; they consider about 17 of those hours to be unproductive (U.S.: 45 hours a week; 16 hours are considered unproductive). We could all be accomplishing a lot more — but then again, none of us wants to be a workaholic either. It’d be great to get tons done and have work/life balance. And who better to ask than Tim Ferriss, author of the international bestseller, The 4-Hour Workweek? (Tim’s blog is here and his podcast is here.) Below are six tips Tim offered, the science behind why they work, and insight from the most productive people around. 1) Manage Your Mood Most productivity systems act like we’re robots — they forget the enormous power of feelings. If you start the day calm it’s easy to get the right things done and focus. Here’s Tim: I try to have the first 80 to 90 minutes of my day vary as little as possible. Research shows email:

Digital storytelling with StoryRobe StoryRobe is another way for kids to create digital stories using photos or digital copies of their own artwork. Once they've selected the images they want to use and put them in the right order, they can record the text to go with the images. They can talk for a total of up to 3 minutes, and synchronize the images with what they are saying by tapping the screen as they talk to advance to the next picture. StoryRobe creates a single video file that can then be shared. Here's The Schedule Very Successful People Follow Every Day All too often, productivity tips are a dime a dozen. Some even conflict with each other. What we need is a system. What schedule do the pros use?

Profes en el siglo XXI: 36 cosas a las que debes estar dispuesto/a 1. Seleccionar la plataforma de comunicación adecuada entre las muchas disponibles 2. Enviar archivos de gran tamaño. British-educated investor resigns after daughter,10, hands him list of milestones he's missed The 56-year-old, who is now Chief Economic Adviser at German insurer Allianz, Pimco’s parent company, told wealth management magazine Worth : “About a year ago, I asked my daughter several times to do something — brush her teeth, I think it was — with no success. I reminded her that it was not so long ago that she would have immediately responded, and I wouldn’t have had to ask her multiple times; she would have known from my tone of voice that I was serious. “She asked me to wait a minute, went to her room and came back with a piece of paper. It was a list that she had compiled of her important events and activities that I had missed due to work commitments. Talk about a wake-up call.

the i-D guide to getting ahead in fashion Brush up your CV, spellcheck your blog, head for the Capital, dress up, go out and be prepared to work your arse off. i-D's handy guide for securing the fashion career of your dreams tells it like it is. DO: USE YOUR YOUTHMake no mistake, fashion feeds off the energy, ideas, enthusiasm and generally wrinkle-free attractiveness of young people. Without regular infusions of new blood, the whole merry-go-round would gradually grind to a halt because many older protagonists quite possibly haven't had any good ideas since 97 and are terrified of looking out of touch. So, if you have a job interview, don't allow it to be a fearful interrogation. DON'T: HAVE A BORING CVIf the fashion big time is what you are aiming for, then you need a CV that reads well, looks sharps - get it designed professionally if you're crap at graphics - and which emphasises relevant information about your talents.

Do degrees matter in creative industries? "Most graduates today leave with a total debt of £44,000. Fine, if you want to be a vet or a lawyer, but what about if you want a job in the creative industries?" Sam Wolfson gets deep on degrees. August, 1989. The National Union Of Students, still a politically radical organisation railing against the Thatcher government, is trying to get young people to campaign the abolition University maintenance grants. They put an advert in the NME with the headline “STUDENT LOANS - HOW WILL IT AFFECT YOU?” Fun Reading Comprehension Activities for Kids Learning to read is a breeze for some kids, but can be challenging for others. The whole process starts with children using descriptive language for story telling and progresses to the ability to comfortably read alone. Working with children throughout these stages supports their development and allows for their own self-learning. Finding fun ways to entice and challenge readers through reading comprehension activities can make the process enjoyable – and encourages kids to enjoy reading for years to come. Reading Comprehension for Beginning Readers Young children just getting comfortable sounding out words and starting to read on their own can learn more about story structure by changing the ending of a story read together.

How to hire millennials—and weed out the bad ones - Quartz Yes, I hear you complain about them every day: Those millennials, they ask about vacation time in the first interview! They get a bad cold and disappear for days! They want my job after a week in their job! “Who do these upstarts think they are,” you moan to me over every business lunch. I feel your pain—but question your premise. The secret to a higher salary is to ask for nothing at all - Quartz Columbia, South Carolina South Carolina, as expected, voted overwhelmingly for Hillary Clinton in the Democratic primary today (Feb. 27). It was a dispiriting end to Bernie Sanders’ mad-dash effort to get South Carolinians to “feel the Bern.” Connecting with the young, black voters he targeted would have made Bernie’s path to nomination at least plausible, but after a 50-point loss his chances are looking slim indeed. Today’s poll data suggest that more than four in five black South Carolinians, who made up a 62% of voters today, voted for Clinton—even more than the 78% that voted for Obama in 2008. Though we won’t know for a while, years even, maybe Sanders’ effort will turn out not to be for naught.

How to Get Through a Workday on No Sleep So, you couldn’t sleep last night. You’d like nothing more than to go back to bed, but you’ve got a long day of work staring you in the face. How do you power through? uld work emails be banned after 6pm? 10 April 2014Last updated at 07:01 ET By Tom de Castella BBC News Magazine France has brought in rules to protect employees from work email disturbing them outside office hours. Would a law to this effect be feasible elsewhere? You're reclining on the beach admiring the surf when your phone goes beep.

Employers ignore almost everything on your application–except this It’s the holiday season, and millions of people are about to get a flood of unsolicited career advice from older relatives. Most of it will be useless. You don’t need to be told that a resume should be clear, uncluttered, and typo free. The Ideal Commute Is Not Actually No Commute I can't say for sure that I have the world's shortest commute, but if it were any shorter, I'd probably be dead. My commute is three each way: That would be steps, not stops or even minutes. Three steps from the threshold of my bedroom to that of my home office.

A New Business Strategy: Treating Employees Well While some companies squeeze staff to make more money, a growing number are testing the theory that they can have both profits and happy workers. Employees at King Arthur Flour's bakery in Vermont (Alana Semuels) NORWICH, Vt.–Call centers are not, typically, very happy places—especially around the holidays. Workers have quotas to make, and often sit in bleak cubicles, headsets on, plowing through calls from stressed shoppers, as they count down the minutes until lunch. But the employees in this call center in Vermont are rosy-cheeked and—can it be?