The Curation Buzz... And PearlTrees -SVW 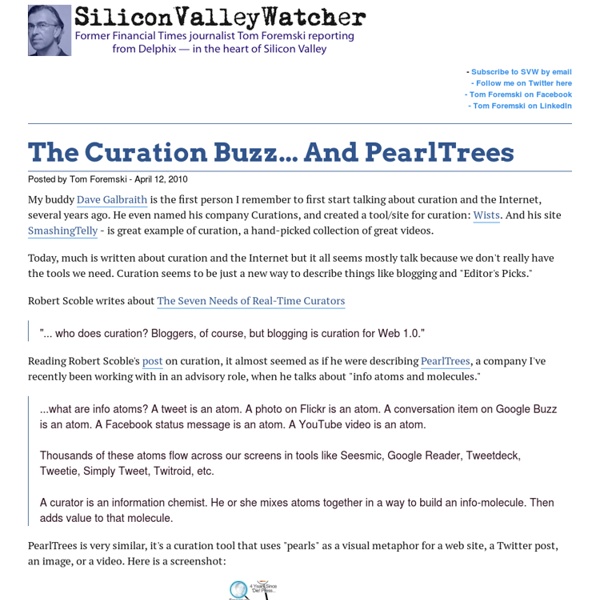 Posted by Tom Foremski - April 12, 2010 My buddy Dave Galbraith is the first person I remember to first start talking about curation and the Internet, several years ago. He even named his company Curations, and created a tool/site for curation: Wists. And his site SmashingTelly - is great example of curation, a hand-picked collection of great videos. Today, much is written about curation and the Internet but it all seems mostly talk because we don't really have the tools we need. Curation seems to be just a new way to describe things like blogging and "Editor's Picks." Robert Scoble writes about The Seven Needs of Real-Time Curators "... who does curation? Reading Robert Scoble's post on curation, it almost seemed as if he were describing PearlTrees, a company I've recently been working with in an advisory role, when he talks about "info atoms and molecules." ...what are info atoms? More to come... We might talk a lot about curation these days but we've only just begun.

Museums and the Web 2010: Papers: Miller, E. and D. Wood, Recollection: Building Communities for Distributed Curation and Data Sharing Background The National Digital Information Infrastructure and Preservation Program at the Library of Congress is an initiative to develop a national strategy to collect, archive and preserve the burgeoning amounts of digital content for current and future generations. It is based on an understanding that digital stewardship on a national scale depends on active cooperation between communities.

Opinions Libres - Le blog d'Olivier Ezratty The Traveling Geeks met with Patrice Lamothe from Pearltrees (@pearltrees) for nearly two hours at the beginning of the Traveling Geeks tour. This guy is running the Internet startup buzz playboo k like perfect, at least for a French startup: he did a tour in the Silicon Valley visiting local influencers and bloggers, sponsored the Traveling Geeks and Leweb, talking at Leweb in plenary session (twice…), creating plug-ins, buttons, that can be placed everywhere on social sites, his site is in English, and so on.

Pearltrees brings curation to next level, adds Team feature As the Internet grows, finding content that's relevant to you becomes tougher. Sure, there's your basic Web search and then there's aggregation, similar to what Google and Yahoo do with news headlines. But another form of information discovery is starting to gain some momentum: curation. Just about a year ago, I wrote a post about a French company called Pearltrees, which was just launching a service that was best described as bookmarking, but with a social twist. The idea is simple, really. Content Curation and the Interest Graph: Delivering Context to the Consumer In December, an article I wrote "Content Is King, But Distribution Is Queen and She Wears the Pants" was nominated and won an end-of-the-year contest for the best content marketing post of 2013. The contest was run by a new startup called ShareBloc, a new content distribution platform for professionals to share and curate content. The original post identified the growing problem of content saturation on the Internet. Good distribution — whether paid or earned — can help content marketers cut through that noise.

pearltrees, socializing and curating content on the web Content of any type is not useful unless you can find it, organize it and interact with it. In the enterprise companies have tried many different schemes to try and get business content collected in a central repository, organized, tagged, version controlled, and searchable. This has often taken the route of "content management" systems. Social curation finds an audience: Pearltrees reaches 10M pageviews With its slick visual interface for bookmarking content, Pearltrees is unique enough that I’ve been both impressed and slightly skeptical that a mass audience will actually use it. But it looks like the site has found plenty of users. The French startup just announced that it crossed two big milestones in March: It has more than 100,000 users curating links, and it received more than 10 million pageviews. Not only does that show the concept is resonating, but it also suggests Pearltrees could reach the scale where it can build a real business around advertising or by offering premium accounts for publishers. When you share links on Pearltrees, they show up as little circles called Pearls. (The site can also automatically add links that you share on Twitter.)

Nation Performing Arts Convention Like e-mail in the ‘90s and the web at the dawn of the new millennium, artists and organizations—as a matter of business—have had to adapt to these new modes of communication and integrate these tools into their operations. Web 2.0 and social platforms like Digg and Delicious, YouTube, Flickr, and Facebook have pushed the electronic envelope even further up the learning curve. Along comes Twitter, and the real-time revolution is on—just as mobile technologies have gone viral. The speed of new development presents challenges—for technologists and luddites alike. But whether you’re a traditionalist or a ‘new mediaist,’ [1] future audiences are growing up with these technologies, [2] and eventually, the arts, like every living thing, must adapt or die. Social media is where the jobs will be.

The Difference Between Content Curation and Link Spraying "Content curation" is one of those phrases that gets repeated ad nauseam without much thought into what it actually means or what role it should play in our digital marketing strategies. It is a term that that is widely used, yet the definition of content curation (at least in the social media marketing sense) is murky and unspecific. This blog post is an attempt to define what digital content curation is and how we can begin to think more creatively about this throwaway term. I don't think it means what you think it means When most people use the word, I think what they mean is distributing content from various sources via social media.

Pearltrees Visualizes How You Organize the Web This post is part of Mashable's Spark of Genius series, which highlights a unique feature of startups. If you would like to have your startup considered for inclusion, please see the details here. The series is made possible by Microsoft BizSpark. Name: Pearltrees Quick Pitch: Pearltrees is a new visual way to organize content on the Web and connecting people's interests. Genius Idea: How do you organize the web on the browser?

Pearltrees Dives Into Social Curating With Pearltrees Team Content curation and mapping service Pearltrees has decided to focus on the fact that people want to do things in groups and has as of today upgraded its core product with a groups functionality, called Pearltrees Team. Now accesible just by logging in, Pearltrees Team allows you to hook up with other people in order to create a Pearltree collaboratively in realtime. Ideally this goes down as such: You really care about fashion so you search for fashion in the Pearltrees search box and are confronted with really elaborate visual cluster displays of fashion blogs, each blog its own “pearl.” You decide that anyone who likes The Sartorialist is probably a good egg and click on the puzzle piece in the Pearltrees detail window in order to ask if you can join the team. If the team leader accepts, you then can see all the Pearltree curation happening as it happens as well as as comment on individual Pearltree decisions.

A pretty good introduction to understand what Pearltree is made for as well as some of its potential. Not exactly the practical "how-to use" though. by tuk0z Jan 12

Scoble's post and the content farm debate also helped transform it into a buzzword. by PED Jul 15