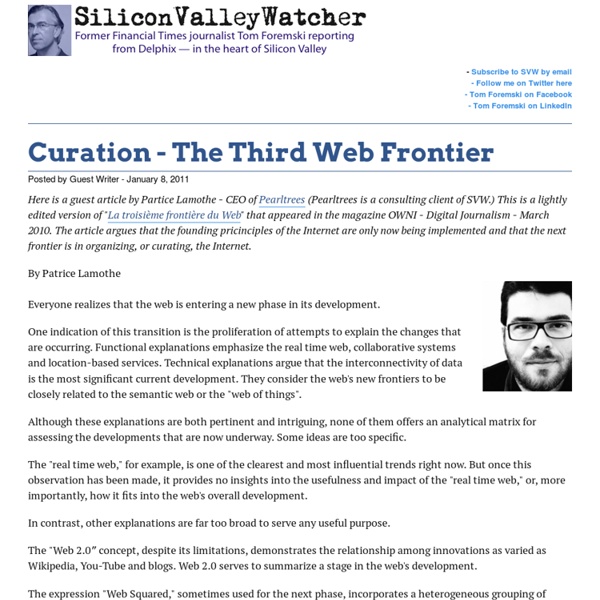 Posted by Guest Writer - January 8, 2011 Here is a guest article by Partice Lamothe - CEO of Pearltrees (Pearltrees is a consulting client of SVW.) This is a lightly edited version of "La troisième frontière du Web" that appeared in the magazine OWNI - Digital Journalism - March 2010. The article argues that the founding pricinciples of the Internet are only now being implemented and that the next frontier is in organizing, or curating, the Internet. By Patrice Lamothe Everyone realizes that the web is entering a new phase in its development. One indication of this transition is the proliferation of attempts to explain the changes that are occurring. Although these explanations are both pertinent and intriguing, none of them offers an analytical matrix for assessing the developments that are now underway. The "real time web," for example, is one of the clearest and most influential trends right now. In contrast, other explanations are far too broad to serve any useful purpose.

What Makes A Great Curator Great? How To Distinguish High-Value Curation From Generic Republishing Today content curation is "sold", promoted and marketed as the latest and trendiest approach to content production, SEO visibility, reputation and traffic building. But is it really so? Is it really true that by aggregating many content sources and picking and republishing those news and stories that you deem great is really going to benefit you and your readers in the long run? Is the road to easy and effortless publishing via curation tools a true value creation business strategy, or just a risky fad? How can one tell? Photo credit: theprint

4 Promising Curation Tools That Help Make Sense of the Web Steven Rosenbaum is a curator, author, filmmaker and entrepreneur. He is the CEO of Magnify.net, a real-time video curation engine for publishers, brands, and websites. His book Curation Nation is slated to be published this spring by McGrawHill Business. As the volume of content swirling around the web continues to grow, we're finding ourselves drowning in a deluge of data. Curation And The Human Web... Posted by Tom Foremski - November 16, 2010 There is no doubt in my mind that the topic of curation and the Internet, is an important one and that it will be a dominant topic in 2011. Curation is important because we are reaching the limits of what can be achieved through algorithms and machines in organizing and navigating the Internet. Aggregation looks like curation but it's not. (Please see: Aggregation Is Not Curation - There Is A Big Difference - SVW)

The 5 Models Of Content Curation Curation has always been an underrated form of creation. The Getty Center in Los Angeles is one of the most frequently visited museums in America – and started as a private art collection from one man (J. Paul Getty) who had a passion for art. Aside from a few well known examples like this one, however, the term curation has rarely been used outside of the world of art … until now. One of the hottest trends in social media right now is content curation – thanks in no small part to the leading efforts of several thought leaders actively promoting the idea. Welcome To The New Age Of Curation I’m guessing that a lot of you think that now – right now – is a golden age of creation. And in many ways, it is. It’s never been a better time to make art of all kinds, from video games – my own art of choice – through books to filmed entertainment and beyond. Sure, the massive media disintermediation spawned by the Internet has spawned a golden age for creators, at least for touching audiences directly. But finding great, sometimes underappreciated art is the thing we consumers need the most help on right now – especially because there’s so much of it out there, and so much of it that can be easily accessed. That’s why, in many ways, this is the ‘Age Of Curation’, not the age of creation.

SXSW 2011: Andy Carvin - the man who tweeted the revolution Andy Carvin: 'I see my Twitter account as a newsgathering operation.' Photograph: Anna Gordon for the Guardian Andy Carvin is getting a little sick of talking about which verb best describes what he does. Aggregation Is Not Curation - There Is A Big Difference Posted by Tom Foremski - November 2, 2010 Curation is becoming an increasingly important term and for good reason: the online world is increasingly messy, muddled and full of blind alleys. Search used to be the best way to navigate online but today it is only one part of an Internet user's dashboard. Finding things is fine if you know what to look for, but search is increasingly less effective in judging the quality of links, or putting those links into a context.

Mind Sports Organisation The Mind Sports Olympiad (MSO) is an annual international multi-disciplined competition and festival for games of mental skill and mind sports. The inaugural event was held in 1997 in London with £100,000 prize fund[2] and was described as possibly the biggest games festival ever held.[3] The MSO was the first event of its kind[4] aiming to create an Olympics of the mind, awarding gold, silver and bronze medals for each event[5] and highly influential on the mind sports movement and competitions that have followed since. The main MSO tournament has been held every year in England.[6][7]

Twitter and the Anti-Playstation Effect on War Coverage As I follow the remarkable political transformations ongoing in the Middle East and North Africa through social media, I’m struck by the depth of the difference between news curation and anchoring on Twitter versus Television. In this post, I’d like to argue that Television functions as a distancing technology while social media works in the opposite direction: through transparency of the process of narrative construction, through immediacy of the intermediaries, through removal of censorship over images and stories (television never shows the truly horrific pictures of war), and through person-to-person interactivity, social media news curation creates a sense of visceral and intimate connectivity, in direct contrast to television, which is explicitly constructed to separate the viewer from the events. Although it is the first factor most people think of, I believe that the distancing effect of TV isn’t just because TV is broadcast and social media is interactive.

Dead Link! The Human Algorithm When I became a reporter, almost 20 years ago, my job was to dig up scarce, precious facts and deliver them to a passive audience. Today, scarcity has been replaced by an unimaginable surplus and that audience is actively building its own newsroom. Journalists the world over are struggling to cope with a social and mobile tsunami of ‘user generated content’, to use an increasingly inadequate phrase. Twitter and YouTube will overwhelm news organisations who can’t master their potential. A common mistake for those seeking to cope with this profound disruption is to confuse technology with innovation. Calendar Fills Itself Up Based on What You Like The Spark of Genius Series highlights a unique feature of startups and is made possible by Microsoft BizSpark . If you would like to have your startup considered for inclusion, please see the details here . Name: UPlanMe Quick Pitch: UPlanMe is an online notification system that filters upcoming events and specials based on what you like into one place for your viewing pleasure.

All Things D Is Haunted by the Man Who Isn't Here Steve Jobs in 2007//Photo Credit: Acaben/Flickr RANCHO PALOS VERDES, California — This year, as with the last 10, several hundred top digerati have flocked to Southern California for the All Things D tech conference. As in previous years, the roster of speakers, interviewed by conference runners Walt Mossberg and Kara Swisher, is an all-star list of tech execs, along with figures from Hollywood and other sectors of modern industry. This year’s luminaries include Apple CEO Tim Cook, New York Mayor Mike Bloomberg, Spotify investor Sean Parker, LinkedIn founder Reid Hoffman, and screenwriter Aaron Sorkin.

Content Curation for Teachers Have you ever felt that there is simply too much interesting, educational content on the web? Fortunately, there are also some great, free products that help learners curate all of the many things they can read, watch, hear etc. on the web. The beauty of taking control of your content by saving and organizing links is that you can quickly find, revisit or share content with others. By curating the web, one can essentially build up a library of data in the cloud for free. I know personally as a history teacher, I spend a lot of time surfing the web when I prepare lessons. In addition, through my own exploration of the web and thanks in large part due to services like Twitter, Google Plus, Stumble Upon, and YouTube, I come across things that I want to teach my students in the future.

Maria Popova: In a new world of informational abundance, content curation is a new kind of authorship Editor’s Note: Maria Popova is the editor of Brain Pickings, a curation of “cross-disciplinary interestingness” that scours the world of the web and beyond for share-worthy tidbits. Here, she considers how new approaches to curation are changing the way we consume and share information. Last week, Megan Garber wrote an excellent piece on whether Twitter is speech or text. Yet despite a number of insightful and timely points, I’d argue there is a fundamental flaw with the very dichotomy of the question.