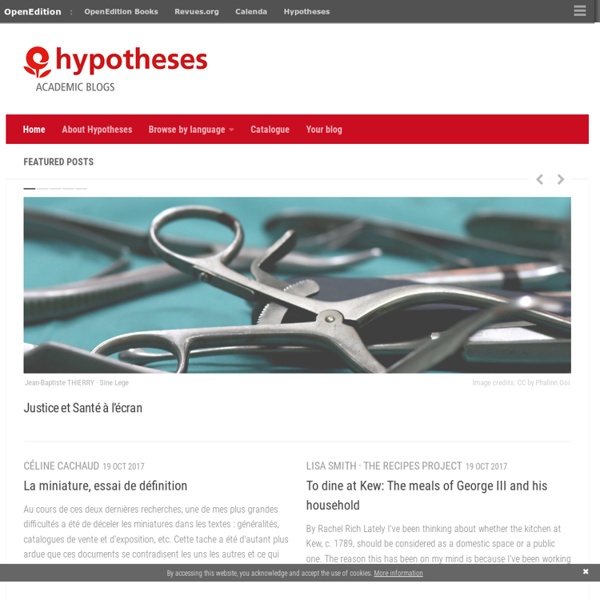 So, You Want to Start an Academic Blog? Four Tips to Know Before You Start You’ve heard of blogging and the blogosphere. You’ve toyed with the idea of starting a blog yourself. But, you haven’t done so yet. Why? MAMA - Dev.Opera By Brian Wilson MAMA: What is the Web made of? The Web has search engines—many of them. However, they are typically concerned only with the text content of a Web page. What about a search engine for a Web page's structure? Mimi Ito Biography Mizuko Ito is a cultural anthropologist of technology use, examining children and youth’s changing relationships to media and communications and is Professor in Residence and John D. and Catherine T. MacArthur Foundation Chair in Digital Media and Learning at the University of California, Irvine, with appointments in the University of California Humanities Research Institute, the Department of Anthropology, and the Department of Informatics. Her work on educational software appears in Engineering Play: A Cultural History of Children’s Software. In Japan, her research has focused on mobile and -portable technologies, and she co-edited a book on that topic, Personal, Portable, Pedestrian: Mobile Phones in Japanese Life. She has led a three-year collaborative ethnographic study, funded by the MacArthur Foundation, examining youth new media practices in the US, and focusing on gaming, digital media production, and Internet use.

Spend 10 Minutes Doing This Every Day and You Could Transform Your Blogging Today I want to suggest an exercise that has the potential to improve your blogging profoundly if you build it into your daily routine. Look at another blog Image by zev OK – this may not sound that profound – most of us read other blogs every day but it doesn’t revolutionise what we do – but stick with me for a second while I explain HOW to do it in a way that could have a big impact.

Easy Guide to Research Blogging Blogging allows PhD and Early Career researchers engage a wider research community. Motivation | Why blog?Blogging lets you communicate ideas in an informal setting. Think of a blog as a notepad where you accumulate thoughts. Tf-Idf and Cosine similarity In the year 1998 Google handled 9800 average search queries every day. In 2012 this number shot up to 5.13 billion average searches per day. The graph given below shows this astronomical growth. The major reason for google’s success is because of its pageRank algorithm. PageRank determines how trustworthy and reputable a given website is.

Design thinking origin story plus some of the people who made it all happen As a final note I would like to acknowledge some of the women of design thinking I have found on my obscure hunts through white papers and internet searches. I am convinced that there are more. Help me find them. Angelika Dilschmann, Ewa Gunnarsson, Susanne Bødker, Kerstin Frenckner, Caroline Nordquist, Kerstin Severinson Eklundh from Project Utopia. Constance Abernathy was a trained architect that directed Buckminster Fuller’s office in New York and then founded a private architecture firm. Ruth Asawa who won the First Dymaxion Award for Artist/Scientist, and attended Black Mountain College.