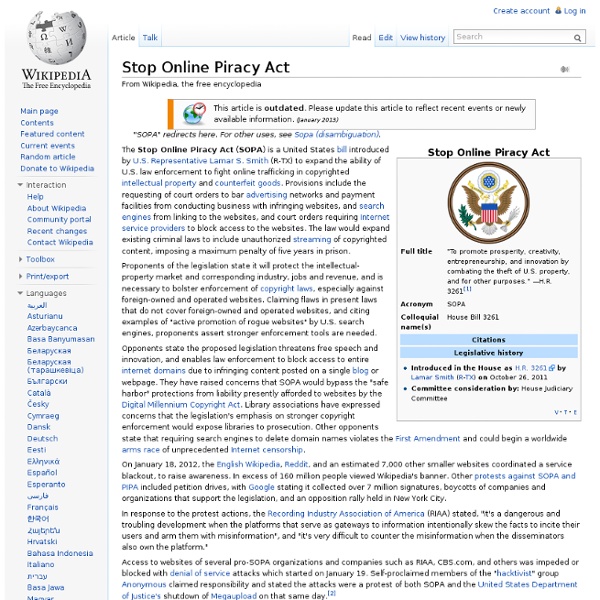 Proponents of the legislation said it would protect the intellectual-property market and corresponding industry, jobs and revenue, and was necessary to bolster enforcement of copyright laws, especially against foreign-owned and operated websites. Claiming flaws in present laws that do not cover foreign-owned and operated websites, and citing examples of active promotion of rogue websites by U.S. search engines, proponents asserted that stronger enforcement tools were needed. Opponents claimed that the proposed legislation threatened free speech and innovation, and enabled law enforcement to block access to entire internet domains due to infringing content posted on a single blog or webpage. They expressed concerns that SOPA would bypass the "safe harbor" protections from liability presently afforded to websites by the Digital Millennium Copyright Act. Overview[edit] The originally proposed bill would allow the U.S. On December 12, 2011 a revised version of the bill was tabled.

SOPA supporters list updated, GoDaddy not included Last week, the US Congress House Judiciary Committee released their list of companies who support the Stop Online Piracy Act. Until that point we had a growing list of companies like Twitter, Reddit, Kaspersky, Mozilla, Wikipedia and Google who gave their opinion as to the problems SOPA would present to the Internet, but no clear idea of who was actually supporting it. One company though drew the ire of the Internet community for their support, domain registrar and web host, GoDaddy. Thanks to an online boycott, which has led to the departure of nearly 30,000 domains per day, GoDaddy has since reversed their position on the bill.

DNS provision pulled from SOPA, victory for opponents In a move the technology sector will surely see as a victory, a controversial antipiracy bill being debated in Congress will no longer include a provision that would require Internet service providers to block access to overseas Web sites accused of piracy. Rep. Chairman Lamar Smith (R-Texas), one of the biggest backers of the Stop Online Piracy Act, today said he plans to remove the Domain Name System requirements from the Stop Online Piracy Act . PIPA is the new SOPA The Pirate Bay is often cited as one of the original 'rogue sites' It looks like the hashtags are paying off. As the House Judiciary Committee held hearings on the Stop Online Piracy Act (SOPA) in December, the powers of the internet—the web companies who innovate, the users who populate it—joined together to defend the idea of a free and open ’net. Now, because of the controversy and noise (more than 700,000 tweets and a million emails), there may no longer be the legislative will in the House to pass it, according to Rep. Darrell Issa, one of the bill’s most vocal opponents. But bills often come in pairs, and SOPA’s twin in the U.S.

PROTECT IP Act The PROTECT IP Act is a re-write of the Combating Online Infringement and Counterfeits Act (COICA),[5] which failed to pass in 2010. A similar House version of the bill, the Stop Online Piracy Act (SOPA), was introduced on October 26, 2011.[6] In the wake of online protests held on January 18, 2012, Senate Majority Leader Harry Reid announced that a vote on the bill would be postponed until issues raised about the bill were resolved.[7][8][9] Content[edit] The bill defines infringement as distribution of illegal copies, counterfeit goods, or anti-digital rights management technology. Downloads fail to fill gap as album sales plummet for sixth year running Take That were among record industry winners in 2010, with the year's bestselling album. Photograph: David Fisher / Rex Features The music industry had another miserable year in 2010,with new figures published today showing that album sales had dropped for the sixth year running. Combined digital and physical sales, chiefly CDs, dropped by 7% overall to 119.9m units. Digital album sales were up by 30.6% on last year – from a little over 16m to 21m – but the CD market continued to slump, falling 12.4% to 98.5m. The figures were made available as HMV announced that it was closing 60 UK stores in 12 months after Christmas sales were down 10%.

Hollywood or Silicon Valley? — Obama faces a difficult choice on SOPA A controversial online piracy bill could force President Obama to choose between two of his most important allies: Hollywood and Silicon Valley. Obama hasn’t taken a position yet on the Stop Online Piracy Act (SOPA) that has divided senior lawmakers in both parties, but that will have to change if it clears Congress. If Obama signs the bill, he will dash the hopes of Silicon Valley executives who donated heavily to his 2008 campaign and are vehemently opposed to the anti-piracy measure. But the entertainment industry would see a veto as a betrayal by the administration on its most significant priority. SOPA would empower the Justice Department and copyright holders to demand that search engines, Internet providers and payment processors cut off access to sites “dedicated” to copyright infringement.

SOPA and PIPA-Do you care? DAILYHOSTNEWS, January 11, 2012- The much hyped and talked about bills namely SOPA and PIPA have already stirred the internet with various online campaigns and discussions against them. Everyone’s eyes are set on D-day when the USA Congress will be voting on the internet censorship bill SOPA. The discussion has attracted even those who have a laid back attitude towards the happenings in political circles. Many social networking sites and microblogging platforms are getting engaged in gathering votes opposing the proposed bill. Viewing the situation as a bystander gives a feeling that both the sides have valid points to state themselves correct.

July 12, 2007 Baghdad airstrike The July 12, 2007 Baghdad airstrikes were a series of air-to-ground attacks conducted by a team of two United States Army AH-64 Apache helicopters in Al-Amin al-Thaniyah, in the district of New Baghdad in Baghdad, during the Iraqi insurgency which followed the Iraq War. The attacks received worldwide coverage following the release of 39 minutes of classified cockpit gunsight footage in 2010. In the first strike, the crew of the two Apaches directed 30mm cannon fire at a group of ten men in the path of advancing U.S. 2000s in the music industry In the first decade of the 21st century, the rise of computers as the primary means to record, distribute, store, and play music caused widespread economic changes in the music industry, fundamentally changing the relationships between artists, record companies, promoters, retail music stores, the technology industry, and consumers. The rise of digital music consumption options contributed to a few fundamental changes in consumption. First the decline of album sales. With the A la carte sales models increasing in popularity, consumers no longer download entire albums but rather choose single songs. The chief economic impact of these changes was a dramatic decline in revenues from recorded music. In the 21st century, consumers spent far less money on recorded music than they had in 1990s, in all formats.

Rupert Murdoch squares off with Obama over online piracy legislation The gathering storm over online piracy legislation being debated in the US Congress has sucked two more heavy hitters into the fray, with the Obama administration and Rupert Murdoch lining up on opposite sides of the argument. The controversy over the Stop Online Piracy Act (Sopa) going through the House of Representatives and its Senate equivalent, the Protect Intellectual Property Act (Pipa), has intensified. Websites including Reddit and possibly Wikipedia are planning to "go dark" on Wednesday in protest at the proposals, which they say will lead to government censorship of the internet and be disastrous for innovation. On Saturday, the Obama administration made clear that it would not tolerate several of the more controversial aspects of the two bills, particularly the power to interfere with the architecture of the web by tampering with its Domain Name System (DNS). The White House statement was not a simple denunciation of Sopa and Pipa.

When Even The Librarians Are Against SOPA... Supporters of SOPA keep trying to pretend that the only people who could possibly be against the bill are those who profit from infringement. That's crazy. The concern here has nothing to do with infringement, but how SOPA is ridiculously overbroad, and will create massive problems and liability for activities that most people consider perfectly reasonable and legal. Afghan War documents leak The leak, which is considered to be one of the largest in U.S. military history,[5][12] revealed information on the deaths of civilians, increased Taliban attacks, and involvement by Pakistan and Iran in the insurgency.[1][13][14] Wikileaks says it does not know the source of the leaked data.[15] The three outlets which had received the documents in advance, The New York Times, The Guardian, and Der Spiegel, have all concluded that they are genuine when compared to independent reports.[1] Some time after the first dissemination by WikiLeaks, the US Justice Department were considering the use of the U.S. Espionage Act of 1917 to prevent WikiLeaks from posting the remaining 15,000 secret war documents it claimed to possess.[16][17][18] Background[edit] Wikileaks describes itself as "a multi-jurisdictional public service designed to protect whistleblowers, journalists and activists who have sensitive materials to communicate to the public