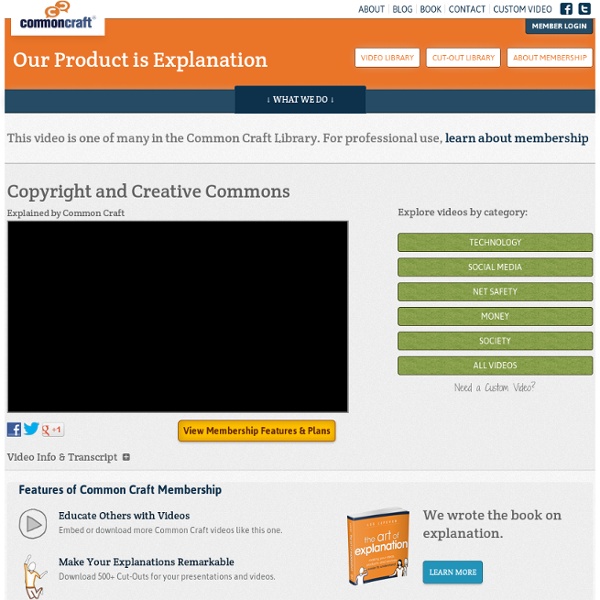 Julia’s dream is to make a living as a photographer. In this dream, she takes amazing photos, people buy them, and their purchases fund her future work. But it’s not that simple. Julia wants to publish some of her photos to help spread the word, but she’s concerned because photos are easy to copy. She could lose control and not be able to make a living from her talent. So she does some research and learns that in the U.S., as with other countries, we have laws that give creators of materials like books, images, movies, artwork and music a way to own and protect their creations. And she’s surprised to find that when she creates photos, she owns the copyright to them automatically, without taking any other action. She likes being covered by copyright law, but it limits her exposure, because her permission is required for sharing a photo. Her research leads her to Creative Commons, which is a set of licenses that she can use to make her copyrighted photos free for sharing.

Photos + Movement = Photeo (Part 1 of 3) by Stephen Haskin & Megan Torrance “In eLearning, the idea is to create the opportunity for the learner to have an “ah-ha!” moment. Ah-ha! moments are the parts of learning that stick, and you can’t give yourself more opportunity to create an ah-ha! moment than by using all the visual elements and techniques at your disposal.” Photeo. The word differentiates a static photograph, or any image whether still or moving, from a more video-like experience that employs anything you can see or hear, but not necessarily video. Ken Burns popularized this concept when he created “The Civil War” series on PBS in the late 1980s. The approach soon gained a label: “The Ken Burns Effect.” These days, there are many methods and programs that easily add motion to a still image or video clip, and which can make words or a little image move across a larger scene. Photeo phundamentals When we’re designing and developing eLearning, the photeo technique can be so easy to accomplish that it’s almost silly not to use it at some level. Example 1.

The Ultimate list of Free Stock Photos Sites for eLearning Are you looking for free e-learning images, photos, cliparts or illustrations? In this post I will present you The Ultimate list of Free Stock Photos Sites for eLearning. If anyone of you have used one or more of the above Free Stock Photos Sites I will very much appreciate if he/she share with us his experience! If you know another Free Stock Photos Sites that is not included in the list I will highly appreciate if you leave a comment with a link! PublicDomainPictures.net is a repository for free public domain photos. Get 2 Free eBooks Get the eLearning Industry's Articles in your inbox. Anilla Cultural | Latinoamérica-Europa Spanish culture industry becomes bank collapse casualty | World news Amid all the talk of bailouts and sovereign debt, less attention has been paid to another victim of the financial crisis – the arts. The Spanish culture industry has been hit by a double whammy: the public spending cuts that began in 2010 and the collapse of the savings banks that have been a main source of funding. These banks, known as cajas, grew out of montes de piedad – which were basically pawn shops – in the 19th century as an encouragement to the poor to save. They became something akin to friendly societies and were technically not for profit, and so had no shareholders. As they grew, they channelled their surplus into foundations that spent it on la obra social – anything from old people's homes and drug rehabilitation centres to opera houses and art galleries. Nearly all the cajas have succumbed to debt or corruption claims and, furthermore, have become banks. "We don't have the culture of philanthropy that you have in the UK and the US," he says.

IRI - Institut de recherche et d’innovation du centre pompidou, Accueil co-creatingcultures Recently we delivered the final prize Hack The Ride to Miquel Llobet and David Farrús, members of the WMB team who were the first prize winners of Hack The Ride with a proposal based on Google Glass that integrated data from the bike while you drive and you can request more or less information from the controls of the bike. It was the first of three prizes to be awarded at the end of 24 hours of Hack The Ride, a hackathon we organised for/with BMW Motorrad and the global BMW Innovation Group (Innovation Works). The idea was to create new applications for mobile phones and similar devices to improve motorcycle driving in town. We took the Mobile World Center at Plaza Catalunya during the 22nd and 23rd of February. BMW showed and shared the workings of their new c-evolution electric motorbikes which come with an interesting set of sensors and systems for collecting and sharing data. The other two winners were: Paul Günther of the Gumball team won the third prize.