Copyright Fair Use and How it Works for Online Images 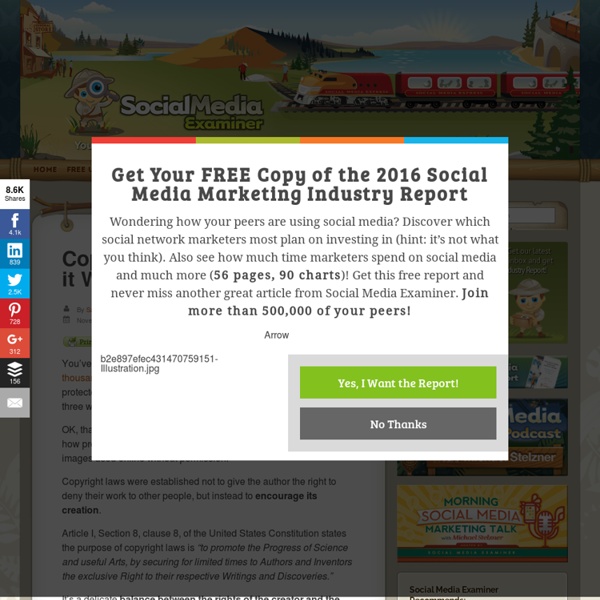 You’ve heard the adage that a picture is worth a thousand words, but when that picture is protected by copyright, the picture is only worth three words: cease and desist. OK, that’s kind of a lawyer joke. But it illustrates how protective people are about finding their images used online without permission. Copyright laws were established not to give the author the right to deny their work to other people, but instead to encourage its creation. Article I, Section 8, clause 8, of the United States Constitution states the purpose of copyright laws is “to promote the Progress of Science and useful Arts, by securing for limited times to Authors and Inventors the exclusive Right to their respective Writings and Discoveries.” It’s a delicate balance between the rights of the creator and the public’s interest. This article will cover exactly what copyright is and what it covers. And then we’ll look at the concept of fair use as it pertains to using images online. What Is Copyright? In Summary

Copyright and Creative Commons Julia’s dream is to make a living as a photographer. In this dream, she takes amazing photos, people buy them, and their purchases fund her future work. But it’s not that simple. A dozen ways to teach ethical and safe technology use From the draft of my Survival Skills book: A dozen ways to teach and promote ethical and safe technology use Responsible teachers recognize that schools must give students the understandings and skills they need to stay safe not just in school, but outside of school where most Internet use by young people occurs. Over-filtered school networks set up a false sense of security; the real world of the Internet is quite different from the Internet at school. Comparison of genealogy software General information[edit] a Using Java General features[edit] a Family Historian users can also optionally install free plugins (access to the Family Historian plugin store is integrated into the program). Scripting tools are included for automation of repetitive tasks, and much more. b Legacy Family Tree can also save DNA Test Results and Print the values.

A propos des licences Our public copyright licenses incorporate a unique and innovative “three-layer” design. Each license begins as a traditional legal tool, in the kind of language and text formats that most lawyers know and love. We call this the Legal Code layer of each license. But since most creators, educators, and scientists are not in fact lawyers, we also make the licenses available in a format that normal people can read — the Commons Deed (also known as the “human readable” version of the license). The Commons Deed is a handy reference for licensors and licensees, summarizing and expressing some of the most important terms and conditions. Social and Ethical Behavior in the Internet of Things By Francine Berman, Vinton G. Cerf Communications of the ACM, February 2017, Vol. 60 No. 2, Pages 6-7 10.1145/3036698Comments Last October, millions of interconnected devices infected with malware mounted a "denial-of-service" cyberattack on Dyn, a company that operates part of the Internet's directory service.

Kitty Cooper's Blog Today I sent the following email to a newly found DNA cousin match at ancestry whose great-grandmother lived right next door to my family in Kristiansand, Norway in the late 1800s. She moved to the U.S.A just a year after they did (1884 and 1885) and lived a block away from where my grandad eventually lived on Ovington Ave in Brooklyn, N.Y. Dear cousin, OK now I REALLY want to see where our DNA matches, because I have a large database (spreadsheets) of where my Dad, my brother and I match various known Norwegian relatives so it is likely that I can figure out from the matching DNA segment(s) where we are related and if it is really the 7th cousin match shown at Ancestry.com on the Eigeland line.

Ethics in the age of digital manipulation - Global Journalist By Mark M. Hancock Posted Jul 1 2009 Home / Recent Stories / Ethics in the age of digital manipulation The first day in April is called April Fool’s Day in the United States. 2008 Internet Fraud, Scam and Crime Statistics Statistics regarding internet scams and frauds are presented here as a snapshot in time January 2009, but below are links to archived statistics from previous years. Web crime statistics are notoriously difficult to obtain, with many sources each calculating them in a different manner and different time frame, using a different source. To provide the most reliable picture, we use the Internet Crime Complaint Center's (IC3) statistics as a baseline. The IC3 began operation on May 8, 2000, as the Internet Fraud Complaint Center and was established as a partnership between the National White Collar Crime Center (NW3C) and the Federal Bureau of Investigation (FBI) to serve as a vehicle to receive, develop, and refer criminal complaints regarding the rapidly expanding arena of cyber crime. These statistics have the advantage of the FBI's expertise, but the weakness of being 1 to 2 years out of date. To overcome that we add our own tracking system statistics to update the FBI / IC3 statistics.

StoryScans Activation Key Easily transform your images into stories. The activated Toolbox 4 software combines recorded voice with the scan into a small high fidelity file that can be shared universally. StoryScans talking images are easy to create. Simply Select the scan, Record the voice, and Save to create the StoryScans file. For your Windows or OS-X computer, use the Flip-Pal Toolbox 4 software.

The title states exactly what you will find on this informative site. Very informative. by annambaker Feb 5

Hawkins, Sara. "Copyright Fair Use and How it Works for Online Images." Social Media Examiner. November 23, 2011. Web. by taylorholen Jan 21