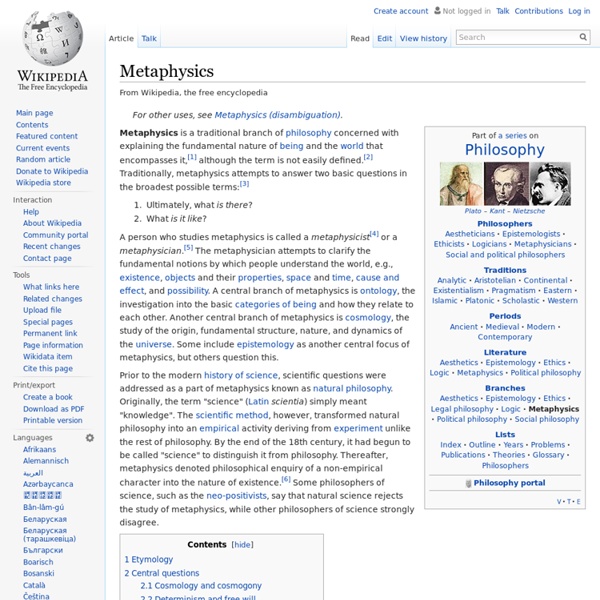 Metaphysics is a traditional branch of philosophy concerned with explaining the fundamental nature of being and the world that encompasses it,[1] although the term is not easily defined.[2] Traditionally, metaphysics attempts to answer two basic questions in the broadest possible terms:[3] Ultimately, what is there?What is it like? Prior to the modern history of science, scientific questions were addressed as a part of metaphysics known as natural philosophy. Originally, the term "science" (Latin scientia) simply meant "knowledge". The scientific method, however, transformed natural philosophy into an empirical activity deriving from experiment unlike the rest of philosophy. Etymology[edit] However, once the name was given, the commentators sought to find intrinsic reasons for its appropriateness. Central questions[edit] Cosmology and cosmogony[edit] Metaphysical Cosmology is the branch of metaphysics that deals with the world as the totality of all phenomena in space and time. [edit] [edit]

Related:  Pseudo • The problems with philosophy • -2

"John Baptist Porta - "Natural Magick" - Volumn IX The Ninth Book of Natural Magick "How to Adorn Women, and Make them Beautiful." "The Proeme" Chapter I - "How the hair may be dyed Yellow, or Gold color." Chapter II - "How to dye the Hair Red." Royal Society national academy of science in the United Kingdom The Royal Society, formally The Royal Society of London for Improving Natural Knowledge,[1] is a learned society and the United Kingdom's national academy of sciences. Founded on 28 November 1660, it was granted a royal charter by King Charles II as "The Royal Society".[1] It is the oldest national scientific institution in the world.[2] The society fulfils a number of roles: promoting science and its benefits, recognising excellence in science, supporting outstanding science, providing scientific advice for policy, fostering international and global co-operation, education and public engagement. It also performs these roles for the smaller countries of the Commonwealth. The society is governed by its Council, which is chaired by the Society's President, according to a set of statutes and standing orders.

Epistemology A branch of philosophy concerned with the nature and scope of knowledge Epistemology (; from Greek ἐπιστήμη, epistēmē, meaning 'knowledge', and -logy) is the branch of philosophy concerned with the theory of knowledge. Epistemology is the study of the nature of knowledge, justification, and the rationality of belief. Albertus Magnus - Wikipedia Albertus Magnus,[3] O.P. (c. 1200 – November 15, 1280), also known as Saint Albert the Great and Albert of Cologne, was a German Catholic Dominican friar and bishop. Later canonised as a Catholic saint, he was known during his lifetime as Doctor universalis and Doctor expertus and, late in his life, the sobriquet Magnus was appended to his name.[4] Scholars such as James A. Weisheipl and Joachim R. Söder have referred to him as the greatest German philosopher and theologian of the Middle Ages.[5] The Catholic Church distinguishes him as one of the 36 Doctors of the Church. Biography[edit]

Gulliver's Travels 1726 novel by Jonathan Swift Gulliver's Travels, or Travels into Several Remote Nations of the World. In Four Parts. By Lemuel Gulliver, First a Surgeon, and then a Captain of Several Ships is a prose satire[1][2] of 1726 by the Irish writer and clergyman Jonathan Swift, satirising both human nature and the "travellers' tales" literary subgenre. It is Swift's best known full-length work, and a classic of English literature.

Online Scans of Rare & Antique Metaphysical Books pages 1-13 'The Path' and pages 14-19 'Meaning of the Symbol' Voice of Isis - by the Order of Christian Mystics - 1926 Voice of ISIS: CHAPTER XXXIV. The Meaning of the Symbol The Seal consists of a double triangle inscribed in a circle, with an open Eye in the center and three five pointed stars in the spaces between the sides of the triangle and the circle. St. Germain (Theosophy) - Wikipedia There are several "authoritative" biographers who usually do not agree with one another. Probably the two best-known biographies are Isabel Cooper-Oakley's The Count of St. Germain (1912) and Jean Overton-Fuller's The Comte de Saint-Germain: Last Scion of the House of Rakoczy (1988). The former is a compilation of letters, diaries and private records written about the Count by members of the French aristocracy who knew him in the 18th century. Dr.