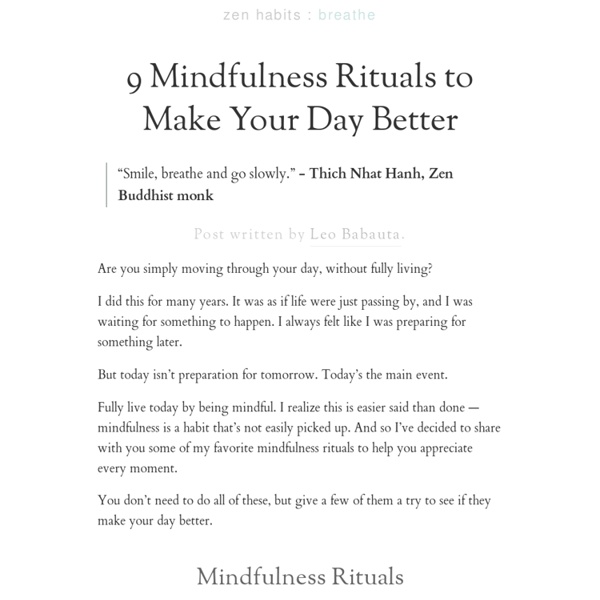 “Smile, breathe and go slowly.” - Thich Nhat Hanh, Zen Buddhist monk Post written by Leo Babauta. Are you simply moving through your day, without fully living? I did this for many years. It was as if life were just passing by, and I was waiting for something to happen. I always felt like I was preparing for something later. But today isn’t preparation for tomorrow. Fully live today by being mindful. You don’t need to do all of these, but give a few of them a try to see if they make your day better. Mindfulness Rituals Ritual isn’t about doing a routine mindlessly. Here are a few of my favorites: 1. 2. 3. 4. 5. 6. 7. 8. 9. These rituals aren’t the only time you should be mindful, but they’re great reminders.

12 Indispensable Mindful Living Tools By Leo Babauta The focus of my life in recent months has been living mindfully, and while I don’t always remember to do that, I have learned a few things worth sharing. The first is a mindful life is worth the effort. It’s a life where we awaken from the dream state we’re most often submerged in — the state of having your mind anywhere but the present moment, locked in thoughts about what you’re going to do later, about something someone else said, about something you’re stressing about or angry about. The state of mind where we’re lost in our smartphones and social media. It’s worth the effort, because being awake means we’re not missing life as we walk through it.

The Tao Of Programming Translated by Geoffrey James Transcribed by Duke Hillard Transmitted by Anupam Trivedi, Sajitha Tampi, and Meghshyam Jagannath How to do Zazen - Seated Meditation Video Hi, I am Patrick and today we are talking about Zazen and how to do it. Meditation isn't just for buddhas or monks; it's for everybody that can be done at almost any time. So let's get started. 5 Ways To Hack Your Brain Into Awesomeness Much of the brain is still mysterious to modern science, possibly because modern science itself is using brains to analyze it. There are probably secrets the brain simply doesn't want us to know. But by no means should that stop us from tinkering around in there, using somewhat questionable and possibly dangerous techniques to make our brains do what we want.

Is this a New Planet? The answer to the title is NO. These images are from a project entitled “Devour” by Christopher Jonassen, which displays pictures of the bottom of worn-out frying pans. Artwork © Christopher Jonassen Link via PetaPixel There's a Word for That: 25 Expressions You Should Have in Your Vocabulary Recently I came across this amazing little Tumblr named ‘OtherWordly‘ – itself a play on words. It consists of a collection of strange and lovely words from different languages through different times. What I like most about this selection of consonants and vowels – little meaning-carrying packages of vibration – is that they all try to point to the unspeakable, the transient or the neglected. That which we forget in the busyness of our daily grind. Words have the power to remind us – and therefore we should choose our words carefully so we are reminded of the things that nourish our souls.

Alternative theories of consciousness: some interesting ideas summarised and discussed. It is remarkable how poor a showing the whole idea of immaterial spirits now gets in both science and philosophy: after all, for many centuries most Europeans, including the brightest and most sophisticated thinkers, took it for granted that the explanation of consciousness lay in a spiritual realm, whereas now, as Searle has said about the existence of God, it isn't so much that everyone is a sceptic as that the question never even arises. Given that ideas from the Christian tradition are rather poorly served, it can hardly be surprising that other religious views are scarcely reflected at all in contemporary Western discussions of consciousness, in spite of the undeniable interest of many of them. In these pages we are currently no better than anyone else in this respect (but at least we are ashamed of ourselves). However, the spiritual view does have one able and well-qualified scientific champion in the shape of Sir John Eccles.

Meditation for beginners The strange thing is that when I was 15, I meditated quite a bit. I was dealing with some anger issues (mostly anger about being a teenager in a not-challenging-enough school system whose friends had started to act in inexplicable ways) and I’m not sure how I learned about it, but I had a regular practice for almost a year. Fast-forward 18 years, and I have a regular practice going again, but barely engaged in the practice in the interim. Beginning to meditate again was a challenge, and it took almost a year of knowing I should, wanting to, and planning on doing it before I finally started down the path. I’m a believer in the positive effects of meditation, because I remember them from when I was 15; I could go from the throes of an almost-hysterical freak-out to relative calm in less than 15 minutes, using breathing and visualization. But if you’re like me and have wanted to start, but have found it to be less easy than you expected, here are some thoughts that might help.

Evie Read is an active five-year-old - but ataxia-telangiectasia will rob her of ability to speak and walk while leaving her mind untouched Twenty children in the UK are diagnosed with ataxia-telangiectasia every yearProgressive condition will slowly rob Evie of her physical abilities. There is no known cure By Claire Bates Updated: 10:23 GMT, 29 February 2012 If you saw Evie playing with a group of her school friends, the only difference you might notice is that she is sometimes a little unsteady on her feet. Tragically her 'wobbly legs' are due to a devastating underlying condition, that will slowly rob the bright blonde girl of her physical abilities while leaving her mentally alert.

artwork by lawrence yang *UPDATE* - I've been working on a new site so haven't been keeping this up to date -- in the meantime if you'd like to see my latest work, please find me on Facebook, Twitter, or Instagram. And as always, you can email me with any questions! Thanks, Lawrence Prices for original work ranges from $200 to $1000. Please email me for more details. Limited edition prints are also available here.

Sometimes the "middle way" seems elusive, when in reality it's right there - before our eyes! Reduce, and achieve clarity. Rituals for me are both separate (that is - "sacred") and an essential part OF my life. Both. At the same time. Not one/either or, but both. Peace! by seannab Nov 13

Thanks for sharing your definition of ritual. It clicked with me. Sometimes I do approach my rituals with a "ok, now let's mediate" It's as if my rituals are separate from my life, rather than the doorway to the beginning, middle or end of my day. In the context of your definition I realize now I have taken for granted the power of my rituals. I now feel empowered by this new perspective and again want to thank you for your pearl of wisdom. Cheers! Terry by terry13z Nov 13