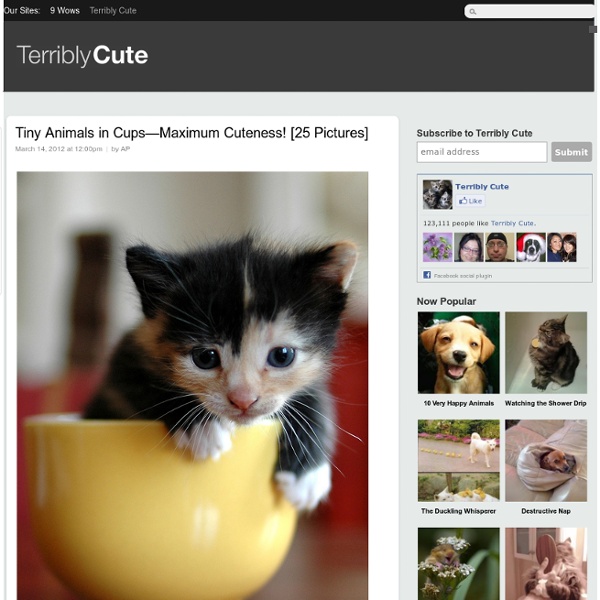 10 Very Happy Animals March 19, 2012 at 4:00pm | by AP I want whatever they’re having… Like Terribly Cute for daily content like this! Cuteness Collage Happy End| animal rescue before and after This is a story about cats and dogs that have found a new home and regain their will for life… Related Posts 10 Reasons Why Dogs are Better Than Cats Cat Island, Japan Seven Awesome Reasons Why Dogs are Men’s (and Women's) Best Friend Problems with Husky Secrets of Dogs and Cats Funny Cats Black Animals Luxurious place for cats

Cutest Paw Gives You the Cutest Animal Pictures Around the World - StumbleUpon Flower Collage orangutan + dog bestfriends True Friends After losing his parents, this 3 year old orangutan was so depressed he wouldn't eat and didn't respond to any medical treatments. The veteranarians thought he would surely die from sadness. The zoo keepers found an old sick dog on the grounds in the park at the zoo where the orangutan lived and took the dog to the animal treatment center. The dog arrived at the same time the orangutan was there being treated. The 2 lost souls met and have been inseparable ever since. The orangutan found a new reason to live and each always tries his best to be a good companion to his new found friend. They live in Northern California where swimming is their favorite past time, although Roscoe (the orangutan) is a little afraid of the water and needs his friend's help to swim. Together they have discovered the joy and laughter in life and the value of friendship. They have found more than a friendly shoulder to lean on. Buy the Book! Views: 811717

Old Kingdom of Egypt The Old Kingdom is the name given to the period in the 3rd millennium BC when Egypt attained its first continuous peak of civilization – the first of three so-called "Kingdom" periods, which mark the high points of civilization in the lower Nile Valley (the others being Middle Kingdom and the New Kingdom). The term itself was coined by eighteenth-century historians and the distinction between the Old Kingdom and the Early Dynastic Period is not one which would have been recognized by Ancient Egyptians. Not only was the last king of the Early Dynastic Period related to the first two kings of the Old Kingdom, but the 'capital', the royal residence, remained at Ineb-Hedg, the Ancient Egyptian name for Memphis. The basic justification for a separation between the two periods is the revolutionary change in architecture accompanied by the effects on Egyptian society and economy of large-scale building projects.[1] Third Dynasty[edit] Fourth Dynasty[edit] Fifth Dynasty[edit] Sixth Dynasty[edit]

Dose de arco-íros Preparados para sua dose diária de arco-íros da semana? Its a bugs life: Artist creates human sculpture from 20,000 handmade... By Suzannah Hills UPDATED: 22:29 GMT, 30 January 2012 From a distance it looks like a simple red sculpture of the female form. But artist Gabor Fulop hasn't used marble or paper-marche to create this piece of artwork called 'The Lady Bug' - and has in fact made up his model using 20,000 tiny ladybirds. Using artificial resin, the Bulgarian sculptor handmade the minuscule beetles, before painting them individually. The Lady Bug Sculpture: Hungarian artist Fulop Gabor used 20,000 hand-painted ladybirds to create this model of the female form He then applied the Ladybirds - 20,000 in total - to a model of the female form. He said: 'The work Ladybug resembles a goddess of nature, a fusion of both human and animal organisms, that is both a unique being and a mass of creatures that took a human form. 'My art works through a particular re-interpretation of the traditional techniques of sculpture. Creepy crawlies: The sculpture gives the illusion of ladybirds crawling all over a body