50 Animated Gifs for Every Situation Ever 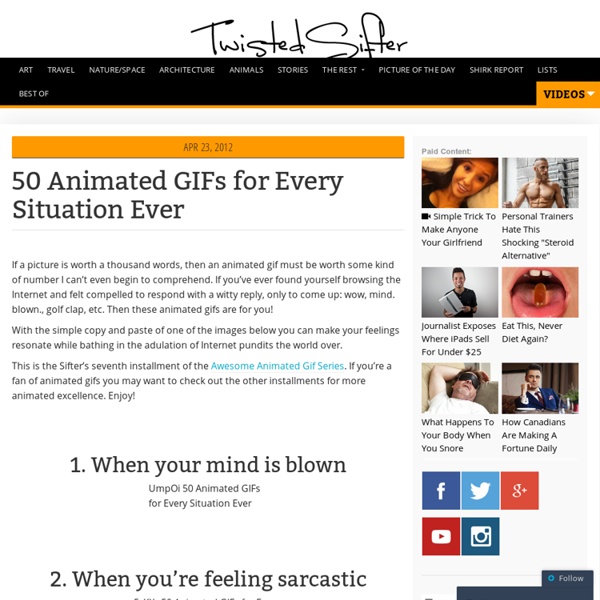 15 Ways to Get Past an Awkward Moment Aug 13, 2012 We’ve all been in awkward situations, our lives are full of them. Nobody’s perfect, but how you handle it can turn an awkward moment into a partial win. Below you will see 15 awkward situations and what these people did to try and turn it around. It might not always work but the best you can do is try, and nobody can take that away from you! Observing Generation Gaps How similar are parent and child? German photographer Frauke Theilking's photo project called "Generation" observes the similarities and differences between generations. Each photo pairs a parent and child, either a mother/daughter or father/son combo, side by side. Devoid of an elaborate background, Theilking's photos focus the viewer's attention on the subjects, who themselves aren't wearing any distracting clothing. Looking at the two figures, there are apparent (no pun intended) likenesses and gaps.

If Dogs Could Send Text Mails "Text From Dog" is an excellent set of fake SMS messages exchanged between a dog and his boss. Share Still Life: Bent Objects UPDATE: The Return of Bent Objects Wires transform these objects from inanimate to hilarious works of art. Little polish girl McDonalds as Sculpture Materials 50 Life Hacks to Simplify your World Life hacks are little ways to make our lives easier. These low-budget tips and trick can help you organize and de-clutter space; prolong and preserve your products; or teach you something (e.g., tie a full Windsor) that you simply did not know before. Most of these came from a great post on tumblr. There is also a great subreddit ‘r/lifehacks‘ with some fantastic tips as well. 20. 30 Examples of Funny Ads for Inspiration In many settings advertisements tend to be ignored or overlooked. When flipping through a magazine you probably skip past the ads unless something really catches your attention. The same thing applies when it comes to driving by billboards, browsing online, or interacting anywhere else where ads appear. One approach for ad designers to capture the attention and interest of viewers is to use humor. Most of us will stop and pay attention to ads if they grab our attention and make us laugh. In this post we’ll showcase 30 examples of advertisements that user humor to make an impact on viewers.

Dear Einstein, Do Scientists Pray? In January of 1936, a young girl named Phyllis wrote to Albert Einstein on behalf of her Sunday school class, and asked, "Do scientists pray?" Her letter, and Einstein's reply, can be read below. (Source: Dear Professor Einstein; Image: Albert Einstein in 1947, via Life.) 50 Faces in Everyday Objects Have you ever looked at an object or building and thought, “hey that kind of looks like a face!”? It’s actually a psychological phenomenon known as pareidolia. Pareidolia involves a vague and random stimulus (often an image or sound) being perceived as significant; it’s a form of apophenia (seeing meaningful patterns or connections in random or meaningless data). Online you can find entire communities dedicated to finding faces in everyday objects, places and buildings. On Flickr, the group FACES IN PLACES has over 6,365 members and a staggering 23,563 pictures. And on Reddit, there is a subreddit called /r/Pareidolia with nearly 40,000 members!

7 Lessons From 7 Great Minds Have you ever wished you could go back in time and have a conversation with one of the greatest minds in history? Well, you can’t sorry, they’re dead. Unless of course you’re clairaudient, be my guest. But for the rest of us, we can still refer to the words they left behind. Even though these great teachers have passed on, their words still live, and in them their wisdom. I’ve made a list of seven what I believe are some of the greatest teachings by the world’s greatest minds. Lichtenberg Figures: The Fractal Patterns of Lightning Strike Scars Mar 10, 2012 Being struck by lightning is a dangerous and scary experience and can even be fatal. Sometimes, the electrical discharge can leave a tattoo-like marking or scar known as a Lichtenberg figure. The patterns created are known to be examples of fractals.