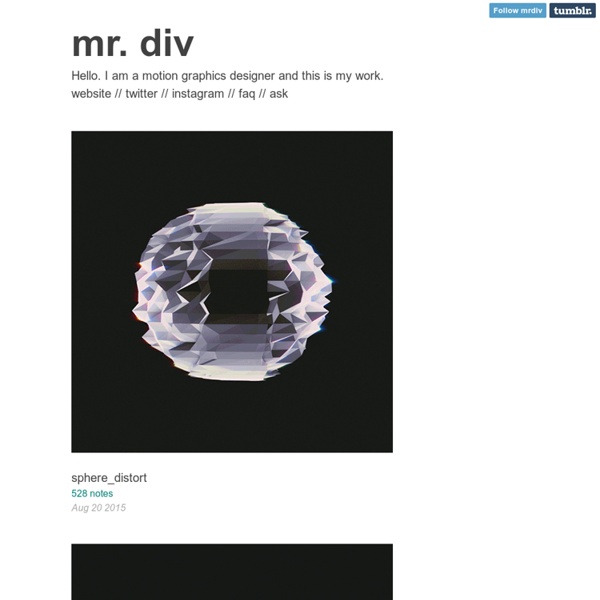 all in our heads // video 16,984 notes Kris Menace ‘The Entirety of Matter’ // Album art by Mr. Div www.entiretyofmatter.com Check out the first in a series of 'gif videos’ for the album here: Kris Menace - Mona 827 notes

Original Creators: Visionary Computer Animator John Whitney Sr Way before After Effects, before the annual Siggraph conference, before Pixar even, computer animation was around in its infant form. There were no feature films rendered entirely on a computer, no animated deconstructions of historic artworks. But there was someone who made all this possible and that man was John Whitney Sr. Clever Typography Art A beautiful collection of clever typography art This is a beautiful collection of clever typography art that we found on popular meme website, 9GAG. Sadly, there was no reference to the artist who created these images, so if you happen to know who they are, please share with us in the comments. We’ll be happy to give them full credit and feature their work here on the Wix Blog. * Update – Thanks to our reader Audrey, we now know this ovely work is from the book Word As Image by Ji Lee

Experimental Cartography: The Map as Art by Maria Popova What tattoo art has to do with fashion, vintage atlases and Nazi concentration camps. We’ve always been fascinated by maps — through various elements of design, from typography to color theory to data visualization, they brilliantly condense and capture complex notions about space, scale, topography, politics and more. Using strobe light to make water drops fall in slow motion We can make water droplets appear to fall in slow motion by pumping them out of a tube using a pump that pushes the droplets out at regular intervals. Many pumps operate at 60 Hz because AC power in the United States oscillates at 60 Hz. If we force droplets out of a tube at 60 Hz and illuminate the droplets with a 60 Hz strobe light, the droplets will appear to be essentially motionless. If you want to make one of these devices, here's what you need.

Records [iPhone, Sound]: Japanese independent record label Records is a Japanese independent record label brought to you by Delaware that only exists on iPhone/iPodTouch. Distributed via the AppStore, featuring now 6 apps (compilations), Re<ords apps are a new spin on distributing music. Instead of going via iTunes, Re<ords acknowledge opportunity to add value to music in the form of interactive experience or what I like to refer to as “designer apps” or collectables. Each app is individually designed and includes a spinning vinyl with custom designed label. You also receive an artwork which you can zoom into.

The Evil Eye - Optical audio record by Indianen The Evil Eye project is the result of a residency by Belgium collective Indianen at the Frans Masereel Center, a center for printmaking in Kasterlee. The project investigates how printmaking could produce another kind of information, transforming material into an object with a new meaning. When you put “optical audio record” on the record player it passes the handheld electronic “eye” the team has built: a simple device with an LED and a light sensor.

Lecture Frieder Nake MARDI 26 MARS / 26 MARCH 2013 19H – 22h Gratuit / Free reservation@iboat.eu 150 places 12/7/65 Nr.2 “Geradenscharen“. 51 x 51 cm. Ink on Paper. Mesmerizing websites Gifmelter, by Chris Shier & Tim Baker I'm impressed about several websites I have discovered recently. They create a crazy abstract visual experience, I like the flow by interacting with them, how fast and well they work and also the chaos they generate by submitting a source. Into the post you can see 3 pieces, each of them created by a different artist, the first one is called Gifmelter, by Chris Shier & Tim Baker, where you can upload an animated gif and let it flow by interacting with it. I'm really looking forward to see what's next from Noisia, he has created so much good work in the last months (check out these 2 previous posts; 1, 2). The second image into the post is from a website by David Kraftsow aka dontsave, called yooouuutuuube.com, where you can enter a Youtube video url and select three different modes such as feedback, zoetrope and mosaic, which is also awesome to see an entire video being distorted through all these modes in real time.

Evan Roth: BAD ASS MOTHER FUCKER (BADASS MOTHERFUCKER #BADA55) One Gif Compositions URLs and single channel video 14:17 Paris 2012 One Gif Compositions are a series of web-based pieces that use found animated gif files to create visual motion studies. Unique animation cycles are formed based on how the browser downloads and caches each of the individual .gif files over time. Each .gif in a given sequence is given a unique file name, convincing the browser to treat them as different images rather than copies of a single file. Exhibited: Eastern Michigan University Gallery, Welcome To Detroit, Detroit, USA

Easy Processing > Illustrator Export (bonus SVG export) at Jeff Thompson After a long time playing with ideas for an easy Processing to Illustrator tool that would allow fancy coding to be piped directly into Illustrator for further layout (and was vector-based the whole way through – no terrible rasterization allowed), I now have a really easy solution that doesn’t involve any fancy code, external libraries, or command-line nonsense. The process: 1. Write your code as usual, but add PDF export 2. Run once and use File > Place… to insert the PDF into your AI document (do not simply open the document, as changes will not be reflected) — NOTE: be sure “Link” is clicked when placing Bromance x Marble Party - boplbopl.com Bromance x Marble Party Audio reactive LED wall and lights for BROMANCE x MARBLE party ! GESAFFELSTEIN, PARA ONE, BRODINSKI, SURKIN, CLUB CHEVAL, BOBMO, MONSIEUR MONSIEUR, DAS GLOW, THE HACKER