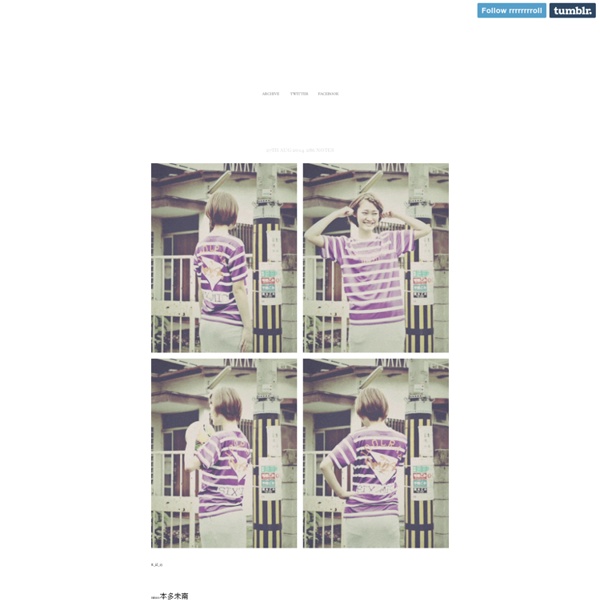 Vintage Photos Enter Spooky Afterlife as Animated GIFs Weir describes this as one of his more "conceptual" pieces. "There's a conflict between the cannon, which has the sole purpose of destruction, and the soldier, whose soul is capable of both good and evil," he says. Turn-of-the-century feminist Mother Jones struck Weir as a mythic character. "She seems shrouded in mysticism, full of mischief and hidden power," he says. "She's exactly the type of person that would burst into a flock of crows."

Inside Instruments This print campaign for the Berlin Philharmonic orchestra uses macro photographs taken inside the cramped spaces of instruments making the inner workings of a violin, cello, flute, and pipe organ appear vast and spacious, almost as if you could walk around inside them. So wonderfully done. Art directed by photographer Bjoern Ewers, you can see more over on Behance. Update: The photography is by Mierswa Kluska and the original concept came from Mona Sibai and Björn Ewers. Signs for the Homeless We have begun to accept submissions. If you have any we’d love to see them, please email at homelesssignstumblr@gmail.com - Chris H. (*Person has requested to not use his face online) November 2013, Park Street, Boston, MA 1.

Iron Man Gets the Shakes and Other Superheroic Animated GIFs A classic Iron Man cover gets a shaky update in Kerry Callen's animated GIF. Spider-Man faces an extra-watery end in this free-flowing GIF. Tony Stark suffers the DTs in a freaky animated GIF created from a classic The Invincible Iron Man cover.

Unbelievable Street Art Murals by El Mac «TwistedSifter 1. Inspired Background by Kofie. Surreal animated gifs by Bill Domonkos Bill Domonkos statement about his work: ” I view my work as a collision and recombination of ideas. My process unfolds gradually and spontaneously—using found materials such as archive film footage, photographs, and the internet. I experiment by combining, altering, editing and reassembling using digital technology, special effects and animation to create a new kind of experience. I am interested in the poetics of time and space—to renew and transform materials, experiences and ideas. The extraordinary thing about cinema is its ability to suggest the ineffable—something that cannot or should not be expressed in words.

Born in 1987 As part of the exhibition: Born in 1987: The Animated GIF we are inviting the public to respond to their show by creating and submitting their own GIFs. We will be featuring the public submissions on this website, plus an edited selection will be shown on The Wall (a 2.7 x 3m screen) in the main foyer of The Photographers’ Gallery in the final weeks. Because all GIFs featured on The Wall will be visible to both visitors to the building plus all passersby on Ramillies St through glass windows, your submissions will have to meet some editorial guidelines.

What Female Disney Characters Might Look Like in Real Life «TwistedSifter Mar 17, 2012 Jirka Väätäinen is a Finnish designer and photographer currently studying graphic design at the Art University College at Bournemouth. His series on Behance titled Envisioning Disney Characters in “Real Life” is one of the most ‘appreciated’ (think of it as a Like on Facebook) projects of all time on Behance with 14,528 thumbs up at the time of this posting. Jirka has a really impressive portfolio of work not only on Behance, but on his personal blog as well. Jirka has tremendous talent and the Sifter looks forward to inspiring work from this artist for many years to come :) Below are 15 famous Disney female characters and what they might look like in real life.