Using Primary Sources on the Web 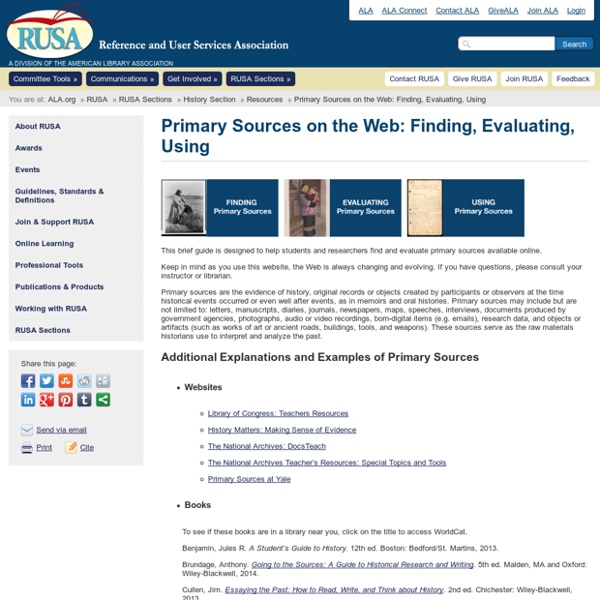 This brief guide is designed to help students and researchers find and evaluate primary sources available online. Keep in mind as you use this website, the Web is always changing and evolving. If you have questions, please consult your instructor or librarian. Primary sources are the evidence of history, original records or objects created by participants or observers at the time historical events occurred or even well after events, as in memoirs and oral histories. Primary sources may include but are not limited to: letters, manuscripts, diaries, journals, newspapers, maps, speeches, interviews, documents produced by government agencies, photographs, audio or video recordings, born-digital items (e.g. emails), research data, and objects or artifacts (such as works of art or ancient roads, buildings, tools, and weapons). These sources serve as the raw materials historians use to interpret and analyze the past. Additional Explanations and Examples of Primary Sources Benjamin, Jules R.

Trans-Atlantic Slave Trade Roll over names of designated regions on the map above for descriptions of the role of each in the trans-Atlantic slave trade. The North American mainland played a relatively minor role in the trans-Atlantic slave trade. Its ports sent out less than five percent of all known voyages, and its slave markets absorbed less than four percent of all slaves carried off from Africa. An intra-American trade in slaves – originating in the Caribbean - supplied additional slaves, however. This region was exceptional in the Americas in that a positive rate of natural population growth began relatively early, thus reducing the dependence of the region on coerced migrants. History General History Resources American Experience Access to PBS series about American history. Many programs are available online. American Historical Association As the professional organization for historians, the AHA advocates for the profession and provides information, awards and grants, and resources for educators.

The National Security Archive December 9, 2014 Torture Report Finally Released Senate Intelligence Committee Summary of CIA's Detention and Interrogation Program Concludes CIA Misled Itself, Congress, the President about Lack of Effectiveness. September 28, 2014 A timeline of wars of the United States For most of its nearly two and a half century history, the United States has been at war. Some of these wars, like the American Civil War, were terrible and bloody and well-remembered. Others, like the Powder River War, were small and mostly forgotten. One was the result of an individual military officer disregarding orders and invading Mexico to retrieve stolen cattle. The consistency of war, and the dissimilarities of the impact and cost of each war, tend to lead to framing war in terms of casualties.