Paul Stamets on 6 ways mushrooms can save the world 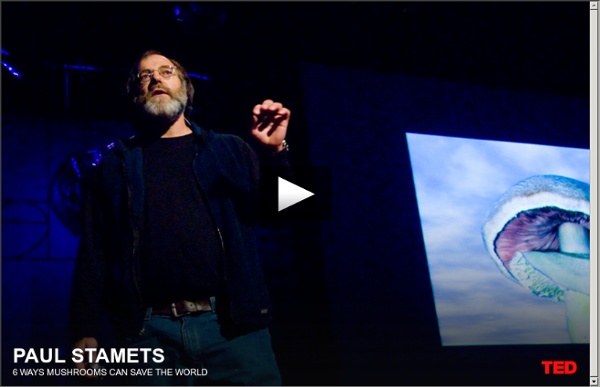 How Mushrooms Can Clean Up Radioactive Contamination - An 8 Step Plan Many people have written me and asked more or less the same question: "What would you do to help heal the Japanese landscape around the failing nuclear reactors?" The enormity and unprecedented nature of this combined natural and human-made disaster will require a massive and completely novel approach to management and remediation. And with this comes a never before seen opportunity for collaboration, research and wisdom. The nuclear fallout will make continued human habitation in close proximity to the reactors untenable. The earthquake and tsunami created enormous debris fields near the nuclear reactors.

Fungi Introduction The organisms of the fungal lineage include mushrooms, rusts, smuts, puffballs, truffles, morels, molds, and yeasts, as well as many less well-known organisms (Alexopoulos et al., 1996). More than 70,000 species of fungi have been described; however, some estimates of total numbers suggest that 1.5 million species may exist (Hawksworth, 1991; Hawksworth et al., 1995). As the sister group of animals and part of the eukaryotic crown group that radiated about a billion years ago, the fungi constitute an independent group equal in rank to that of plants and animals. They share with animals the ability to export hydrolytic enzymes that break down biopolymers, which can be absorbed for nutrition. Rather than requiring a stomach to accomplish digestion, fungi live in their own food supply and simply grow into new food as the local environment becomes nutrient depleted.

A Retinal Prosthetic Powered by Light Retinal implants powered by light could reverse some vision loss with simple surgery. The new implant, which works like a combination digital imaging chip and photovoltaic array, requires much less bulky hardware than previous designs. The devices have yet to be tested in live animals or human patients, but the implants are creating excitement among researchers because they have greater pixel densities and may restore more vision than other retinal prosthetics being worked on. People suffering from macular degeneration (the most common cause of blindness among older people) and some other forms of blindness have lost the light-sensing cells in the retina but still have the underlying nerve cells that convey visual information to the brain. Retinal implants use electrodes to stimulate those nerves.

Cardboard Cloning Tek Here is a simple method for cloning without agar. It is also particularly useful when cloning a single specimen, and when contamination is a factor (you can use cardboard for isolation from contaminants in a similar fashion). Cardboard is semi-selective towards mycelium growth, and not favorable for the growth of most contaminants. Why We Need Mushrooms For the last 30 years Paul Stamets has collected, cultivated, studied and written about mushrooms. He’s the founder of Fungi Perfecti, a company that sells a variety of mushroom-related products, including kits for growing edible mushrooms. He’s also written several books, including Growing Gourmet and Medicinal Mushrooms, and Mycelium Running: How Mushrooms Can Help Save the World.

Type 2 diabetes in newly diagnosed 'can be reversed' 24 June 2011Last updated at 01:19 Researchers found that blood sugar levels of all participants had returned to normal in one week. An extreme eight-week diet of 600 calories a day can reverse Type 2 diabetes in people newly diagnosed with the disease, says a Diabetologia study. Newcastle University researchers found the low-calorie diet reduced fat levels in the pancreas and liver, which helped insulin production return to normal. Seven out of 11 people studied were free of diabetes three months later, say findings published in the journal. More research is needed to see whether the reversal is permanent, say experts.

Bike Yamaha MTH 500 Concept is a layout study of a bike inspired simply by Yamaha’s philosophy and innovative technology. It absolutely was created by Stephane Fougere from France. Depending on the dimensions of the 2007… Read Post → ROTA Bike offers an incredibly fast and intuitive strategy of compacting. Simply rotate the particular centrally located ring to unlock and fold your front wheel and seat to the rear. The Hidden Havest Through Stem Butts [Archive] - myco-tek.org A stem butt refers to the intersect between the base of the fruit body and the mycellium mat... Both, the base of the mishroom and the immediately surrounding mycellium mat, must be harvested together as one connected piece from the substrate... ".....Natural spawn can be generated from the basal rhizomorphs radiating around the stem's connection to the nurturing mycelium.

How Can Designers and Architects Use Biomimicry to Stay on the Cutting Edge of Innovation? Shortly before his death in 2011, Steve Jobs said, “I think the biggest innovations of the 21st century will be at the intersection of biology and technology. A new era is beginning.” The crossroads that he spoke of actually has a name – biomimicry – and while it has been helping inventors, designers and architects innovate in genius ways for centuries, its value has become even more apparent in the past few years as we realize that Mother Nature is one of the universe's most incredible designers. If you're not yet familiar with biomimicry, it's a word that describes finding design inspiration from nature to solve human problems. There are examples of biomimicry all around us – velcro, airplanes, solar panels modelled on ivy, and even buildings modelled after termite mounds.

chrychek's Channel Presenting Christian Laurette's RUN 2 THE CURE - The Cure for Cancer Documentary PREVIEW TRAILER #1 of the long-awaited sequel to the independent documentary RUN FROM THE CURE: The Rick Simpson Story (February 2008) which led to an international people's recognition of how cannabis oil kills cancers and other so-called "incurable" diseases, while exposing the cancer/pharmaceutical industry's dark reputation for holding back natural medicines that work, in favor of continuing the status quo for maximum profit at the cost of human lives. Governments are not acting responsibly with our lives and it is "high" time we took our health back, with no more tolerance for prohibition. We don't have time to wait for studies. People are dying. Governments don't have children, mothers, fathers, etc... people do.