How to eat wild stuff and not get poisoned (how-to) 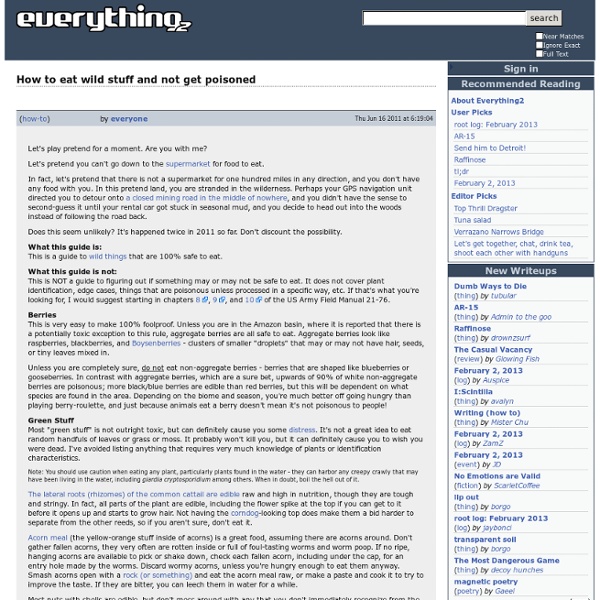 Let's play pretend for a moment. Are you with me? Let's pretend you can't go down to the supermarket for food to eat. In fact, let's pretend that there is not a supermarket for one hundred miles in any direction, and you don't have any food with you. In this pretend land, you are stranded in the wilderness. Perhaps your GPS navigation unit directed you to detour onto a closed mining road in the middle of nowhere, and you didn't have the sense to second-guess it until your rental car got stuck in seasonal mud, and you decide to head out into the woods instead of following the road back. Does this seem unlikely? What this guide is:This is a guide to wild things that are 100% safe to eat. What this guide is not:This is NOT a guide to figuring out if something may or may not be safe to eat. BerriesThis is very easy to make 100% foolproof. Unless you are completely sure, do not eat non-aggregate berries - berries that are shaped like blueberries or gooseberries.

5 Ideas for Fire Tinder A while ago I asked readers Do You Have 5 Ways to Make Fire? The article concentrated on fire starters; steel and flight, lighters, and a few less common systems. However, most of those will be useless for building a fire if you don’t have some tinder to put the flame to. Here are 5 great ideas for fire tinder, both natural and homemade. 1. Dryer Lint Constrictor knot History[edit] First called "constrictor knot" in Clifford Ashley's 1944 work The Ashley Book of Knots, this knot likely dates back much further.[5] Although Ashley seemed to imply that he had invented the constrictor knot over 25 years before publishing The Ashley Book of Knots,[1] research indicates that he was not its originator.[6] Ashley's publication of the knot did bring it to wider attention.[7] Although the description is not entirely without ambiguity, the constrictor knot is thought to have appeared under the name "gunner's knot" in the 1866 work The Book of Knots,[8][9] written under the pseudonym Tom Bowling.[10] in relation to the clove hitch, which he illustrated and called the "builder's knot".

BASIC LIST OF SUGGESTED ITEMS FOR LONG TERM SURVIVAL Some people are saying we should prepare for at least 7 days, but the way things go after a hurricane, tornado, floods, loss of electricity and the fact that these disasters will continue and perhaps even get worse in coming years according to trends, one week is not enough. Some have said 7 years, but that seems too long so do what you can. Be sure to use the older stocked goods first and replace them with new. s Homemade Soap Recipe by Robert Wayne Atkins Grandpappy's Homemade Soap Recipe Copyright © 2007,2008 by Robert Wayne Atkins, P.E. All rights reserved and all rights protected under international copyright law. Click Here for a Microsoft WORD printer friendly copy of this article. Introduction

CHEROKEE DICTIONARY INDEX Manataka American Indian Council There are 3,500 words and phrases on these five pages Each of the 85 letter characters in Cherokee (Tsa-la-gi) represents a unique sound of the soft and flowing language. Cherokee is a beautiful language full of colorful sounds, easily given to rousing oratory, poetry and song. The Cherokee (Tsa-la-gi) words are spelled like they are pronounced and likewise, words are pronounced as they are spelled. The word "syllabary" is used to describe a system to develop words into writing.

Edible Plants & Flowers In Europe Flowers Edible flowers are typically the most encountered type of edible plant in Europe. It is common knowledge that certain flowers, such as nasturtiums, sunflowers, jasmine flowers and honeysuckles are all edible. However, Europe is home to many other types of edible flowers. A wild example is the taraxacum flower, which is native to the continent and used for its edible seeds. Homemade MREs For quite a while now, I've wanted to make up my own "MREs" for my Get Home Bag (GHB). I was recently out scouting some properties, and realized that my GHB only had some packs of tuna and some candy in them. I had broken my own Cardinal Rule - If you use it, replace it immediately. So, I went about making up some MRE packages. Now, these are not true MREs, in that their shelf life is less than half of the 5 years of a commercial MRE, but I figured they were WAY less expensive (remember this later on in the post...). I assembled my "ingredients" based on "Best By" date, calories and protein content.

7 Basic Things You Won't Believe You're All Doing Wrong Obviously, giving birth to a smaller human might take a lot more effort than breathing. But when you realize that even the idiot deer that tried to jump in front of your car last month has probably managed to produce young, you would hope that we smart modern humans are getting it really right. Not so. Today, the majority of women in America are still directed to give birth in the "lithotomy" position, an odd pose that consists of lying flat on your back with your feet and legs raised, sometimes in stirrups. GettyStirrups?

Survival Foods: Cattail, Conifers, Grasses & Acorns Ever wondered what kinds of survival foods you could eat if you were caught in a survival situation? When I first came to Washington state all I could see was a wall of green plants. I knew nothing about what I could and could not eat if I were to get lost in the woods. That changed quickly in Wilderness Awareness School’s Anake Outdoor School program. The curriculum taught me about how to sustain myself with the use of plants, should the need arise.