Why the mantis shrimp is my new favorite animal 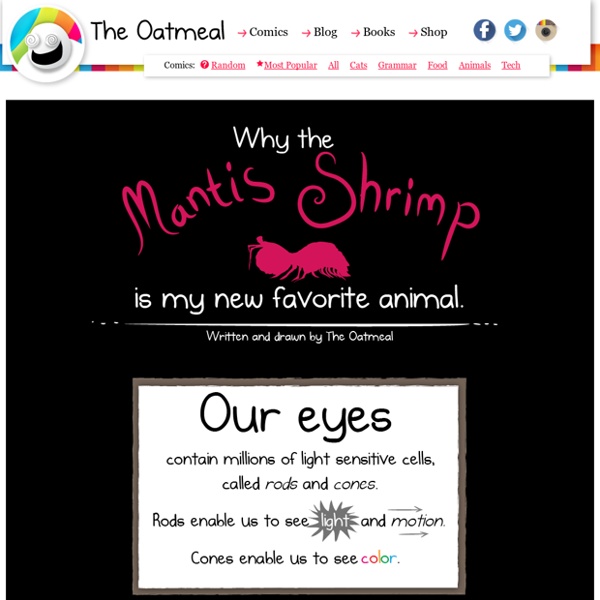 Peter Doolittle: How your "working memory" makes sense of the world Close Help with subtitles Desktop / laptop users: please make sure you have the most updated versions of your browser and Flash player, and that Flash is enabled when you visit TED.com. iOS users: to access subtitles, start playing the video, then tap the speech bubble icon that appears in the bottom row of video controls. All About Art - Famous Artists As of July 1, 2013 ThinkQuest has been discontinued. We would like to thank everyone for being a part of the ThinkQuest global community: Students - For your limitless creativity and innovation, which inspires us all. Teachers - For your passion in guiding students on their quest. Partners - For your unwavering support and evangelism.

Battle of Badr - SHAYKH AL ISLAM The first Revelation to God’s Messenger was the com­mand: Read! This command, coming at a time when there was nothing readily available to read, meant that believers should use their intellectual and spiritual facul­ties to discern God’s acts in the universe and His laws related to its creation and operation. Through such discernment, believers seek to purify themselves and their minds of all ignorance-based superstitions and to acquire true knowledge through observation and contemplation. Human beings are not composed only of their minds. God has endowed us with many faculties, each of which needs satisfaction. So while fe­eding our minds with the Divine “signs” in the universe, we seek to cleanse our hearts of sin.

John Steinbeck on Falling in Love: A 1958 Letter by Maria Popova “If it is right, it happens — The main thing is not to hurry. Nothing good gets away.” Mapping the Human Brain Steven Cherry: Hi, this is Steven Cherry for IEEE Spectrum’s “Techwise Conversations.” Ten months ago, a group of researchers proposed a “large-scale, international public effort [that] aimed at reconstructing the full record of neural activity across complete neural circuits. This technological challenge,” they said, “could prove to be an invaluable step toward understanding fundamental and pathological brain processes.”

Why Chaucer Said 'Ax' Instead Of 'Ask,' And Why Some Still Do : Code Switch Zach Galifianakis makes an Ax joke. YouTube The most common stereotype of black vernacular is the pronunciation of the word "ask" as "ax." "Ax" has gotten a bad rap for years. Pronounce "ask" as "ax," and immediately many will assume that you're poor, black and uneducated. New York City's first African-American schools chancellor, Dr. Knights Templar rotten > Library > Conspiracy > Knights Templar According to legend, the Knights Templar was founded in 1118 to protect tourists headed for Jerusalem. There the small band of warrior monks established a headquarters. In due course, they somehow managed to gain possession of the Ark of the Covenant, which they hid for safekeeping. Even though the Templars swore allegiance to the Pope, their beliefs were not exactly orthodox.

My collection of funny emails from my inbox. Subject: 5 MINUTE MANAGEMENT COURSE Lesson 1: A man is getting into the shower just as his wife is finishing up her shower, when the doorbell rings. The wife quickly wraps herself in a towel and runs downstairs. When she opens the door, there stands Bob, the next-door neighbor. Before she says a word, Bob says, "I'll give you $800 to drop that towel." Researchers find a completely new DNA binding protein The basic premises underlying gene expression—when and where genes are turned on and off—were worked out in bacteria by François Jacob and Jacques Monod in the middle of the twentieth century. The expression of a gene typically relies on one or more proteins binding to a specific DNA sequence near the gene of interest. These proteins are called transcription factors since they regulate the transcription of genes into RNA, the first step in turning them into proteins. At this point, many different families of related transcription factors have been defined. And, as more and more genomes have been sequenced, it was easy to get the impression that we had a complete catalog. But now, researchers at UCSF have discovered a new type of never-seen-before DNA binding protein in an organism called Candida albicans.