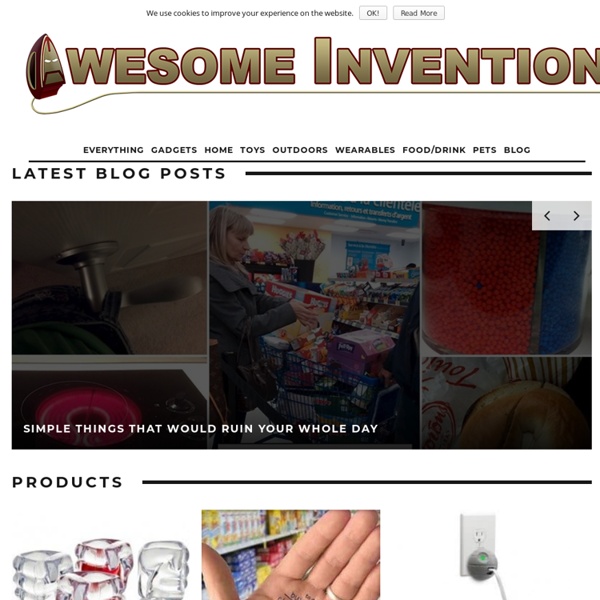 Stop! Police. 10 stupid questions that police ask when they stop you in your car and 10 suitably stupid replies* 1) ‘Can you step out of the vehicle please?’“No, I’m afraid I can’t. I can lurch out of the vehicle, roll out of the vehicle or even ease my way out of the vehicle, but until I own a gladiators chariot or a Popemobile I will never be able to ‘step’ out of a vehicle because that requires being in a standing position.” 2) ‘Is this your car Sir/Madam?’ 3) ‘Have you been drinking?’ 4) ‘Do you know what the speed limit is?’ 5) ‘Do you know why I stopped you?’ 6) ‘Do you know how fast you were going?’ 7) ‘Can I see your driving license please?’ 8) ‘Have you got anything in the boot?’ 9) ‘Can you give me your name and address please?’ 10) ‘Are you trying to be funny?’ Now here are some videos from YouTube where Police Officers are made to look stupid. *Use of these replies is entirely at your own risk. Like this: Like Loading... About beasleygreen

26 Awesome Like A Boss GIFs Why do things normally when you can do them like a boss? Enjoy these twenty-six awesome like a boss GIFs: Sitting Like A Boss ESP Powers Like A Boss Like A Boss GIFs: Awesome Luck Bartending Like A Boss Changing Subway Platforms Like A Boss Teeturtle The Annual Student Toss As the new student season approaches all the big city universities are preparing for the influx of Freshers. Looking out of my office window, which overlooks the main road that runs through the student village, I can’t help but look forward to the Annual Student Toss. The Annual Student Toss isn’t a game played by rugby boys to see who can shoot their load the furthest, nor is it a variation on Soggy Biscuit (I still can’t believe all those dirty old middle aged mum’s in my office actually know what that is!) The townspeople of Guadalupe, Chihuahua celebrate Rosario Ibanez’ acceptance into Manchester University by preparing her for the AST The rules of the AST are simple – students pit their wits against traffic as they attempt the perilous journey from one side of the road to the other without getting knocked ten foot in the air by an oncoming vehicle they have somehow failed to notice. Stop, look, listen – I mean how hard can it be!? Like this: Like Loading... About beasleygreen

Why I’m Coming Out Today Over the past 3-years I have become increasingly frustrated… I’ve wanted to step out, to move forward, to throw off any excuses and to rid myself of this dastardly common tendency to hide. For I believe that if you have a gift of any kind, then you must use it; it is not a gift unless it is given away. There is so much pretense everywhere, in politics, in church, in the workplace, in friendships and worst of all in families and this is immensely sickening to my artistic soul. It is time to tell the truth, to peel back the layers of self-protective deceit and to simply acknowledge that things are as we really find them, not as we wish for them to be. And so my truth is this… “I struggle immensely with fear, it paralyses me, and because of this sometimes I hide behind my computer, even behind this blog, as a means of staying safe; I AVOID doing the one thing that I must do, I avoid being me because I am afraid of you.” Be Inspired Daily By Seven Sentences

Random Add’s of Madness – Phantom Friends on Facebook This is a cautionary tale about accepting anonymous friend requests on Facebook. It is copied word for word, although the names have been changed to protect the idiot. It all started off when… let’s call him ‘Shaun’ requested Facebook friendship with someone he didn’t know, hadn’t met and didn’t even introduce himself to via email, yet took great offence to being added to a group. ‘Shaun’ decided to air his complaint on the group’s page – now he wishes he hadn’t. Facebook Gold… Shaun: ‘Please don’t add me without asking – This group is all about you I don’t right care to much for self-centred people. Not really a pleasant thing to say to someone you don’t know; someone you had the courtesy to include in your cyber world. He replied [verbatim]: ‘Get fucked pal I don’t you from Adam in fact I never even rook time (he could have been of oriental persuasion!?) He couldn’t look because he was blocked from seeing anything apart from this wall… Hello Shaun ;-) Like this: Like Loading...

Anime Characters Database Football Family Football, a funny old game – of two halves – but it only takes a minute to score a goal, and at the end of the day – that’s what wins matches. Putting the ball in the back of the net, because that’s what it’s all about, winning. But it isn’t. There’s more than that. Manuel Pellegrini Being a City fan looking forward to a new season with a new manager in 2013, I’ve been looking at Señor Pellegrini. Terra on the touchline, Pellegrini is set to conquer world football Rafa Benitez Mr. Rafa the unflappable – fact! Joey Barton Wes Craven is best known for the Nightmare on Elm Street films, but in 1977 Craven made a horror film about a clan of deformed, inbred, cannibal mutants who terrorise a family that get stranded whilst on a road trip. “Harrowing and nasty” Gaby Agbonlahor Staying on the mutant theme but on a much less nasty note, we turn our attentions to Aston Villa and England winger, Gaby Agbonlahor. Gaby dreams of finding the treasure of his One Eyed Willy Luis Suarez Yossi Benayoun

Start A Food Blog! - Put Your Recipes Online Top 10 Places You Don’t Want To Visit Travel In previous lists we have looked at amazing holiday destinations – today we are looking at the bottom ten; these are ten places you don’t want to visit! Having said that, maybe the curious would get a thrill from visiting some of these strange and dangerous places, but for most of us, reading about it is quite enough. Feel free to mention any other contenders for the list in the comments. Great Pacific Garbage Patch Pacific Ocean The Great Pacific Garbage Patch, also described as the Pacific Trash Vortex, is a gyre of marine litter in the central North Pacific Ocean located roughly between 135° to 155°W and 35° to 42°N. The Izu Islands are a group of volcanic islands stretching south and east from the Izu Peninsula of Honsh? The Door to Hell Turkmenistan Address: Derweze, Turkmenistan This has featured on listverse before, but it would be remiss of us to exclude it from this list. Alnwick Poison Gardens England Address: Denwick Lane, Alnwick, NE66 1YU, England Mud Volcanoes of Azerbaijan