How to recognize the artists of paintings 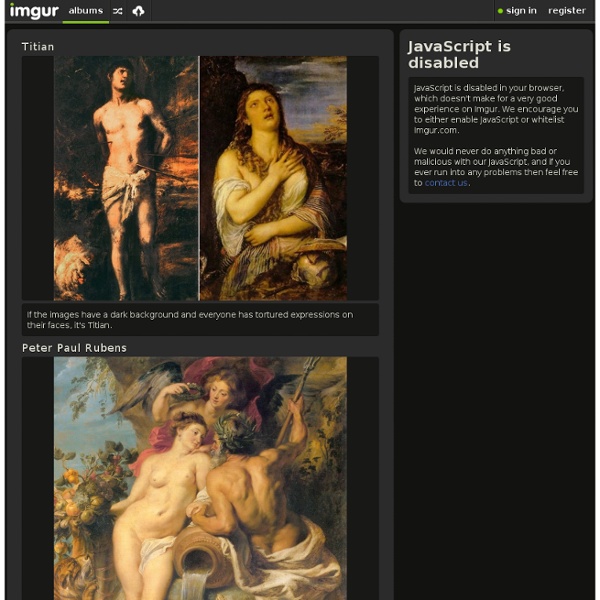 Decoding the Secret Language of Food Expiration Dates Americans tend to harbor dark suspicions about that forgotten can of beans in the back of the pantry, far past its sell-by date. If you’re like most consumers, you probably just toss expired items on the better-safe-than-sorry principle (unless, perhaps, it’s a Twinkie). But there’s a good chance many aged food remains totally safe to eat, according to a new report (PDF) that blames the flawed food-dating system for tons of perfectly edible food getting wasted each year. While many consumers consider the dates printed on foods a hard deadline, they actually indicate maximum quality or freshness, not safety, explains David Fikes, vice president in charge of consumer affairs at the Food Marketing Institute (FMI), a food trade group. While some of those products are donated to food banks, many end up in the landfill. One of the problems, NRDC scientist Dana Gunders says, is that none of the myriad ways foods are labeled actually tell consumers when they should throw out a product.

Vatican Sistine Chapel gets new lighting and AC system 29 October 2014Last updated at 22:54 ET <div class="warning"><img class="holding" src=" alt="Sistine Chapel ceiling " /><p><strong>Please turn on JavaScript.</strong> Media requires JavaScript to play.</p></div> The Sistine Chapel is now illuminated with more than 7,000 LED lights The Vatican has unveiled a high-tech lighting and air-conditioning system to better preserve and display the famous frescoes of the Sistine Chapel. The new air-conditioning aims to reduce the damage to the frescoes from dust, and from the breath, sweat and heat of some six million annual visitors. The new LED lighting saves energy and highlights neglected features. The chapel's renowned sights include a ceiling by Michelangelo, depicting a bearded God giving life to Adam. The new illumination system comprises 7,000 LED lights. Some of these lights aim to show off the deep blue background of another Michelangelo fresco, The Last Judgement.

To wipe deodorant buildup under your arm, use hand sanitizer Animation software used by Studio Ghibli is going open source Toonz, the software that animators at Studio Ghibli used for classics like Princess Mononoke, is going open source. Italian studio Digital Video made a deal with Japanese media company Dwango, enabling Dwango to produce and release a free version of the tool, called OpenToonz, for the international animation community. Making Toonz a world standard for 2D animation "The contract with Dwango," said Digital Video managing director Claudio Mattei, "which offers the Toonz open source platform to the animation community, has enabled Digital Video to realize one of its strategies, i.e. to make of Toonz a world standard for 2D animation." Toonz first saw release in 1993, and is used to turn hand-drawn art into vector graphics. Toonz was also used by Rough Draft Studios for Futurama Toonz is also used by Rough Draft Studios, the group behind Futurama and The Simpsons Movie.

How to sleep in hot weather 20 August 2012Last updated at 12:29 GMT By Tom de Castella BBC News Magazine Southern and eastern Britain has experienced a mini heat-wave. What's the best way to get to sleep on sticky nights? The hot, humid weather across parts of Britain has made for uncomfortable nights. Humidity is a big part of the problem, making it hard for sweat to evaporate. In places like the US, where powerful air conditioning units are reasonably common in houses in hot and humid areas, it's not so much of a concern. But in places like the UK where it's hot and humid less frequently how should people ensure they get a good night's sleep? Weather expert Philip Eden recommends a technique common in Mediterranean countries. Continue reading the main story Sleep strategies "As a species, we are diurnal," says Dr Malcolm von Schantz, a molecular neuroscientist at the University of Surrey's Sleep Centre. "We have evolved to sleep in a consolidated way during the night, when it is cooler and darker.

The Hidden Way to Zoom in Closer in Google Maps How to Get in Touch With Loved Ones During a Disaster | Gadget Lab Photo: Alex Washburn/Wired Disasters often strike without warning–and if you have family or friends who are in or near harm’s way, you’re going to want to get in touch. Unfortunately, that isn’t always so easy: Cell signals and land lines can be jammed with the massive amount of calls flowing in and out of an area. And in the case of today’s Boston Marathon tragedy, there are reports that cell service has been shut down altogether. Here are some of the best tips we know for getting in touch, but this is by no means a complete list. Don’t call. Additional tips: Use a battery case for your smartphone–that thing can’t make it through a whole day when it’s not constantly scanning for a signal. Also, be sure to keep your emergency contact list up to date. Again, please share your tips in the comments below.

Random Wikipedia subject discovery Diabetic ketoacidosis (DKA) is a potentially life-threatening complication in people with diabetes mellitus. It happens predominantly in those with type 1 diabetes, but it can occur in those with type 2 diabetes under certain circumstances. DKA results from a shortage of insulin; in response the body switches to burning fatty acids and producing acidic ketone bodies that cause most of the symptoms and complications.[1] DKA may be the first symptom of previously undiagnosed diabetes, but it may also occur in people known to have diabetes as a result of a variety of causes, such as intercurrent illness or poor compliance with insulin therapy. DKA is a medical emergency, and without treatment it can lead to death. Signs and symptoms[edit] The symptoms of an episode of diabetic ketoacidosis usually evolve over the period of about 24 hours. On physical examination there is usually clinical evidence of dehydration, such as a dry mouth and decreased skin turgor. Cause[edit] Mechanism[edit]

The Serious Eats Field Guide to Asian Greens [Photographs: Ben Jay, unless otherwise noted] When you walk into the produce section of your local Asian supermarket, you'll probably be greeted by a dazzling but daunting display of unusual greens. They're all great, and easy to cook, but it helps to be armed with some knowledge to tell your shoots from your choys. That's why we highlighted the most common varieties you'll find in Asian groceries with notes on what they are, how they taste, and most importantly, what to do with your haul. AA Choy AA Choy stalks and leaves. Latin name: Lactuca sativaAlso known as: Taiwan lettuce, AA Chop Xin, stem lettuce, asparagus lettuce, celery lettuce, celtuce, wosunFlavor: The leaves are similar to romaine, while the stalks taste a little like cucumber. Back to the full list » Bok Choy Shanghai and baby bok choy. Chinese Broccoli Chinese Celery Chrysanthemum Greens [Photograph: Chichi Wang] Daikon Greens [Photograph: wikioticscan/Flickr] En Choy Fava Greens [Photograph: Lily Chin] Kokabu Greens Malabar Spinach