Unlikely: The Impossible and Improbable Objects of Giuseppe Colarusso 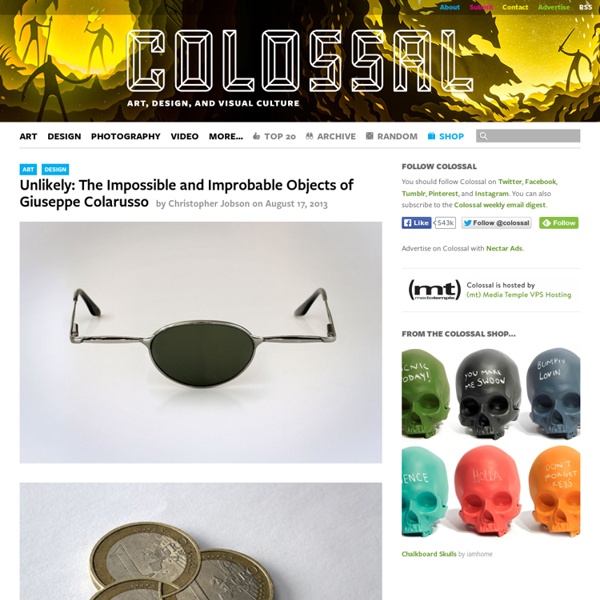 In this ongoing series titled Unlikely, artist and photographer Giuseppe Colarusso imagines bizarre and humorous objects, each of which is either technically impossible, improbable, or simply useless in its proposed design. Colarusso tells me via email that many of the pieces he fabricates himself, however some are digitally created in Photoshop. So what’s the point? He hopes each image will make you stop, think and hopefully bring a smile to your face, which is definitely a worthy cause. Also, I would pay top dollar for that spray paint can with adjustable hue sliders, so could somebody make that? See some 50+ additional concepts over on his website. Related:  Sculptures & Figures

Hyper-Realistic Wooden Sculptures by Tom Eckert Artist and Professor Tom Eckert uses traditional processes to carve these hyper-realistic sculptures of everyday objects entirely made of wood. He uses plenty of carpentry techniques in his creative sculptured pieces, such as constructing, bending, laminating, carving and painting. After receiving his M.F.A. degree from Arizona State University, Eckert began teaching at the university. For more details about his work please visit Eckert’s website www.tomeckertart.com

Shimmering Chain-link Fence Installation by Soo Sunny Park Soo Sunny Park, Unwoven Light, 2013 / Commission, Rice University Art Gallery, Houston, Texas / Photo by Nash Baker Currently on view at Rice Gallery is this shimmering installation titled Unwoven Light by Soo Sunny Park, comprised of some 37 sections of chain-link fence embedded with translucent sections of Plexiglas. The suspended waveforms capture and reflect nearly every light source in the gallery creating a fractalized rainbow of color that changes quality depending on the time of day. Of the work Park says, “We don’t notice light when looking so much as we notice the things light allows us to see. Unwoven Light captures light and causes it to reveal itself, through colorful reflections and refractions on the installations surfaces and on the gallery floor and walls.” Update: Added a new documentary short courtesy Walley Films.

Ceramic Objects Encrusted with Marine Life As if lifted from the wreckage of the Titanic, ceramic artist Mary O’Malley creates sculptural porcelain teapots, cups, and vases adorned with barnacles, tentacles, and other living sea creatures (she refers to them as “porcelain crustaceans”). Many original works from this series titled ‘Bottom Feeders’ are available over on Etsy. (via laughing squid)

Anamorphic Sculptures London-based artist Jonty Hurwitz creates ‘Anamorphic Sculptures’ which only reveal themselves once facing a reflective cylinder. Hurwitz took an engineering degree in Johannesburg where he discovered the fine line between art and science. He has lived in England for many years, working in the online industry though he quietly levitated into the world of art inspired by a need to make ‘something real’. Hurwitz discovered that he could use science as an artistic paintbrush. Each of his sculptures is a study on the physics of how we perceive space and is the stroke of over 1 billion calculations and algorithms. All images © Niina Keks, Otto Pierotto, Richard Ivey

Zheng Chunhui's sculputre 4 years in the making China has a long tradition of wooden sculptures. For centuries they are transforming pieces of raw wood into works of inspiring art , but none as impressive as the sheer creation of Zheng Chunhui . This talented Chinese artist spent the last four years meticulously carving a detailed replica of a famous traditional Chinese painting called ” Along the River during the Qingming Festival ” in the trunk of a little over 12 feet long tree. See more art and design pieces here: PICCADILLY The breathtaking beauty of his work simply can’t be expressed in words, you must see for yourself . The Chinese artist was also honored by the Guinness Book with the new world record for the longest wood carving , measuring 12.286 meters of long, 3.075 meters in height and 2.401 m width. When we hear of ” masterpiece” , this is just the kind of creation that deserves such title. See a video here.

Designing the Perfect Anti-Object Behold the Camden Bench. This pale, amorphous lump of sculpted concrete is designed to resist almost everything in a city that it might come into contact with. Named for the London authority that commissioned it, the Camden Bench has a special coating which makes it impervious to graffiti and vandalism. The squat, featureless surface gives drug dealers nowhere to hide their secret caches. As such, the Camden Bench is a strange kind of architectural null point. I’d like to see what the Camden Bench would look like if it didn’t have to be a bench — if that final design constraint was removed, what would it become? I worry that the Camden Bench is a symbol of the freedom we’ve lost in our public spaces — the freedom to use these spaces as we wish.

External Stimuli by Antony Gormley Quantum potentiality of the Manifested Self External Stimuli : www.antonygormley.com Themes : Art, Consciousness, Humanism Nodes : Antony Gormley, human body, metal, Sculpture takashi murakami at versailles sep 20, 2010 takashi murakami at versailles ‘oval buddha’ by takashi murakami, 2007-2010 (bronze and gold leaf) ©2007-2010 takashi murakami/kaikai kiki co., ltd. all rights reserved. photo: cedric delsaux – water parterre / château de versailles the château de versailles is the location of the latest exhibition by japanese artist takashi murakami. the show is titled ‘murakami versailles’ and features a number of manga-inspired sculptures displayed both indoors and out at the historic french palace. of the 22 works on display, 11 were created specifically for this show. all the murakami works sit within the context of the palace, often contrasting sharply with the period décor and complimenting it at other times. the show will run from now till december 12th as part of the regular versailles admission. nate archer I designboom

Thousands of Plastic Figures Hold Up the Floor One of the most exciting contemporary artists of our time, Korean Do Ho Suh, created this large sculptural installation that doesn't look like much until you come closer. Glass plates rest on thousands of multicolored miniature plastic figures who are crowded together with their heads and arms turned skyward. Together, they are holding the weight of the individual visitor who steps onto the floor. Currently showing at Lehmann Maupin's pop-up gallery at the Singapore Tyler Print Institute (STPI), Floor is one of those installations that's wonderfully thought-provoking. The figures represent the diverse and anonymous masses of people who support and/or resist the symbolic floor. This installation can be seen, alongside works by artists Teresita Fernández, Ashley Bickerton, and Lee Bui, from now till February 11, 2012. Lehmann Maupin Gallery website

Recycled PET Plastic Bottle Plant Sculptures by Veronika Richterová Photo by Michal Cihlář Czech artist Veronika Richterová creates new life from repurposed plastic PET bottles. For the last decade the artist has used various methods of cutting, heating, and assemblage to build colorfully translucent forms of everything from crocodiles to chandelier light fixtures to plants. Her obsession with plastic bottles doesn’t stop with creating artwork, Richterová has also collected over 3,000 PET plastic objects from 76 countries and writes extensively about the history and usage of plastic in her article A Tribute to PET Bottles. You can see hundreds more sculptures in her online gallery. Sculptures Popping Out of Paintings Oh, to have been in Tokyo in June! Shintaro Ohata just finished up a solo exhibition at the Yukari Art Contemprary in Tokyo, Japan. This Hiroshima, Japan-born artist is known for his ability to show us everyday life in a cinematic way. He captures light in his paintings, showering the world, as we know it, with carefully placed strokes of it. More than that, this artist has a unique style. Straight from the Yukari gallery, here's a sample of his stellar work. ' Photos courtesy of Yukari Art Contemporary.

Books and Stones Embedded with Sleek Layers of Laminate Glass by Ramon Todo Splitting his time between Kanagawa, Japan and Dusseldorf, Germany, artist Ramon Todo (previously) is known for his small sculptures of rocks and books embedded with polished layers of glass. Todo’s decision to seamlessly introduce disparate materials into a single object creates an unusual intention, as if these objects have always existed this way. The random pieces of obsidian, fossils, volcanic basalt, and old books are suddenly redefined, or as Beautiful/Decay’s Genista Jurgens puts it: “By inserting something alien into these pieces, Todo is effectively rewriting their history, and the place that these objects hold in the world.” Todo will have a number of new pieces on view with MA2 Gallery at EXPO CHICAGO starting next week. He also has a number of atworks available through Artsy and you can flip through additional glass books clicking the small arrows on MA2 Gallery’s website.

The Mystery of the Maltese Falcon, One of the Most Valuable Movie Props Wilde was so convinced, she agreed to write a letter stating that Risan’s Falcons were the ones used in the film. With it, and with the testimony of Ben Goldmond and Edward Baer, Risan was able to get his two Falcons insured. It was at that point that he informed Gary Milan, the oral surgeon who owned the “official” Falcon, of his findings. When I spoke to Milan in December, he made it clear in no uncertain terms that he finds Risan and his birds to be fraudulent. Milan is cagey about how he came to own his lead Falcon, saying only that it “came” to him after he earned some publicity for selling one of the pianos played in Casablanca. The case for the Milan Falcon rests on documents found in the Warner Bros. archives. Milan insists there is no evidence any plaster Falcons were made for use in the 1941 film. Risan fires right back, saying of the Milan Falcon, “It’s one of the worst fakes I’ve ever seen. The Birds and the Fees The plot, in fact, was only beginning to thicken.

Abandoned Monuments from the Former Yugoslavia