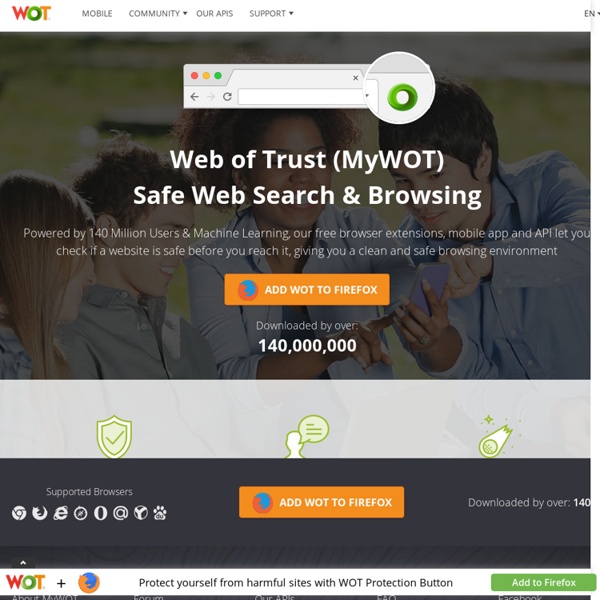 Add WOT to your browser to protect yourself from online threats that anti-virus software can’t spot Web safety is not just about viruses and malware. WOT’s ratings are powered by a global community of millions of users who rate websites based on their own experiences. Add WOT to you browser for protection against online threats that only real life experience can detect, such as scams, untrustworthy links, and rogue web stores. Reputation ratings boost trust online WOT displays a colored traffic light next to website links to show you which sites people trust for safe searching, surfing and shopping online: green for good, red for bad, and yellow as a warning to be cautious.

Topsy - Real-time search for the social web With iOS 9, Search lets you look for content from the web, your contacts, apps, nearby places, and more. Powered by Siri, Search offers suggestions and updates results as you type. There are two ways to use Search on your iOS device. Quick Search 18 Free Ways To Download Any Video off the Internet Video is the future. Periscope has taken the world by storm, and YouTube has launched a subscription service. Even Spotify and Facebook are getting in on the act. We’re not here to ask why you’d want to download any of that video content – the reasons are too numerous.

Dallas, United States Recommendations A few years ago, we created Wanderfly to make the online travel experience more personal, fun and beautiful. From a dinner conversation idea, to a dozen employees crammed in a Soho/Brooklyn loft, to being honored as a top 10 startup, it has been a crazy few years. In 2012, TripAdvisor acquired Wanderfly so that millions of travelers around the world could find the same travel inspiration and recommendations that Wanderfly fans already enjoyed. We're so proud to say that what started as a spontaneous "why not?" idea is now part of the world's largest travel website. The Wanderfly site is now offline.

The Elements of Retro Web Design The vintage and retro style is becoming more and more popular in today’s digital artwork. The use of retro and vintage themes in design is probably one of the most pervasive trends since the industry went almost completely digital. In today’s post, we’ll look at examples of work sourced from the wonderful Dribbble, which helps us focus on snippets of a piece, rather than the entire design or illustration. From here, it’s possible to identify what techniques have been used and to describe how they impact the overall design.

Dear online advertisers, stop following me. It’s creepy When I noticed an online ad promising "The Secrets to Long, Lush Asian Hair" recently, I rolled my eyes. I already have the secret to Asian hair: be Asian. This ad, however, would not be avoided. I saw it on every site I visited, on Facebook, news sites, Google. It began to wear me down, so I clicked on it, briefly perusing its vague claims. Google URL Shortener Posted by Michael Hermanto, Software Engineer, Firebase We launched the Google URL Shortener back in 2009 as a way to help people more easily share links and measure traffic online. Since then, many popular URL shortening services have emerged and the ways people find content on the Internet have also changed dramatically, from primarily desktop webpages to apps, mobile devices, home assistants, and more. To refocus our efforts, we're turning down support for goo.gl over the coming weeks and replacing it with Firebase Dynamic Links (FDL).