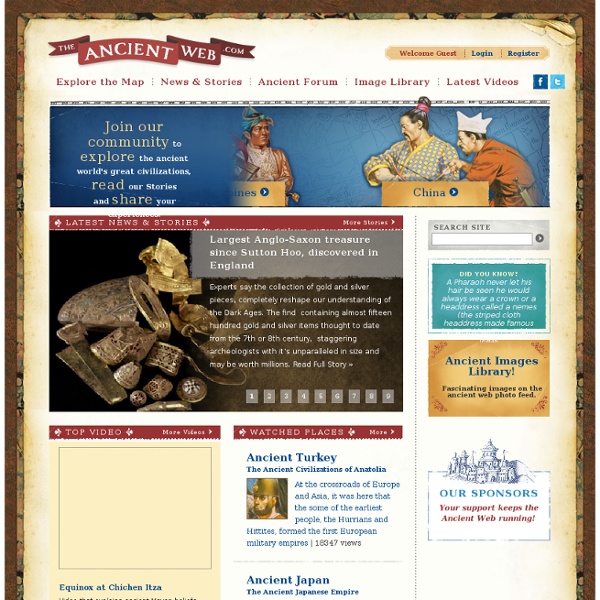 The Ancient Wall as a Cultural Barrier The great wall of china is the most monumental barrier ever created in the ancient world. It is easily the most popular image we associate with the ancient Chinese Empire itself, but it has become so mythologized by in our imagination that we don’t realize it was actually the most extreme cultural barrier ever created. It’s sole purpose was to separate two groups of people, those who were civilized, and those who were not. Read Full Story »

Roman Gods and Goddesses Roman Gods and Goddesses In the beginning Roman gods were considered divine manifestations, faceless, formless, and powerful. The idea of gods as anthropomorphized beings came later, with influences from the Etruscan and Greek pantheons. The Romans worshipped a main pantheon of 12 Gods called Dii Consentes: six gods and six goddesses: Jupiter, Juno, Minerva, Vesta, Ceres, Diana, Venus, Mars, Mercurius, Neptunus, Volcanus, and Apollo. 12 Around 1 Geometry of Creation Antiquities of the Jews by Flavius Josephus This work was translated by William Whiston and edited by the folks at Sage Software, who offer these works, as well as hundreds of ancient and modern authors, on CD from (I am not associated with Sage Software, but left the plug for their CD in place because it is from their production of the text that my work here is based.) HTML conversion was performed from RTF and Microsoft Word sources locally. Preface Book I Containing The Interval Of Three Thousand Eight Hundred And Thirty-Three Years.

The Historical Merlin Illustration of Merlin from Tennyson's Idylls of the King, 1898. In legend Merlin was not only depicted as a wizard but also a bard - a poet and writer of songs. In the Dark Ages bards were accredited with the gift of prophecy. The Bodleian Library, Oxford, where The Red Book of Hergest is now preserved. Ambrosius Aurelius does have many things in common with the Merlin of later romance.

Enuma Elish: Babylonian Creation Myth Dennis Bratcher The Enuma Elish is a Babylonian or Mesopotamian myth of creation recounting the struggle between cosmic order and chaos. It is basically a myth of the cycle of seasons. It is named after its opening words and was recited on the fourth day of the ancient Babylonian New Year's festival.

Zeitgeist Refuted and Exposed Even secular scholars have rejected the idea of Christianity borrowing from the ancient mysteries. The well-respected Sir Edward Evans-Pritchard writes in Theories of Primitive Religion that The evidence for this theory... is negligible. The first real parallel of a dying and rising god does not appear until A.D. 150, more than a hundred years after the origin of Christianity. So if there was any influence of one on the other, it was the influence of the historical event of the New Testament (resurrection) on mythology, not the reverse. The only known account of a god surviving death that predates Christianity is the Egyptian cult god Osiris. In this myth, Osiris is cut into fourteen pieces, scattered around Egypt, then reassembled and brought back to life by the goddess Isis.

A Nazarene Looks at the Book of Mormon Part 1 - Nazarene Space By James Scott Trimm The Book of Mormon makes a major mistake from a Nazarene standpoint. The Book of Mormon does not represent the teachings of the Bible, but instead presents the teachings Protestant Christians have BELIEVED are in the Bible. EyeWitness To The Middle Ages and Renaissance Life in a Christian Monastery, ca. 585"When he was dead his body was not placed with the bodies of the brethren, but a grave was dug in the dung pit, and his body was flung down into it. . . " Crime and punishment in a medieval monastery: the monastery's Abbott provides insight into the monastic life. The Vikings Discover America, ca. 1000"There was no want of salmon either in the river or in the lake." Five hundred years before Columbus, the Vikings discover a New World. Invasion of England, 1066The Norman conquest of Anglo-Saxon England described through the images of the 900 year-old Bayeux Tapestry. Anarchy in 12th Century EnglandThe Anglo-Saxon Chronicle paints a sobering picture of life in 12th century England that contrasts strikingly with Hollywood's image of the Middle Ages.

The Book of Jasher Sacred-textsApocrypha Referred to in Joshua and Second Samuel Faithfully Translated Family tree of the Greek gods Key: The essential Olympians' names are given in bold font. See also List of Greek mythological figures Notes External links