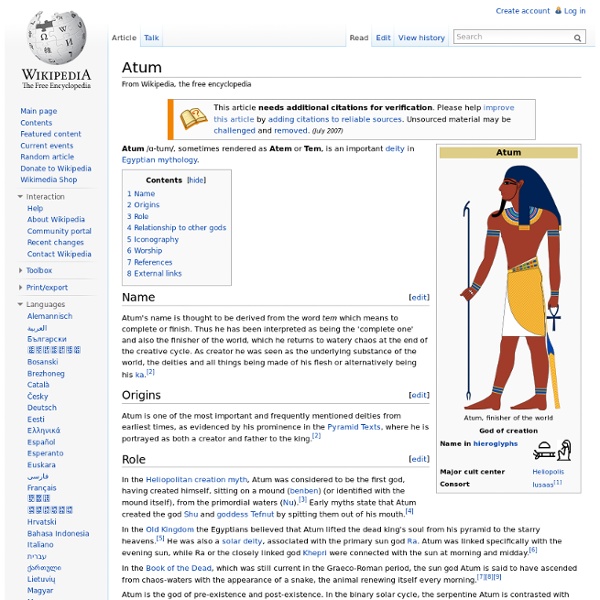 Atum (/ɑ-tum/), sometimes rendered as Atem or Tem, is an important deity in Egyptian mythology. Name[edit] Atum's name is thought to be derived from the word tem which means to complete or finish. Thus he has been interpreted as being the 'complete one' and also the finisher of the world, which he returns to watery chaos at the end of the creative cycle. As creator he was seen as the underlying substance of the world, the deities and all things being made of his flesh or alternatively being his ka.[2] Origin[edit] Atum is one of the most important and frequently mentioned deities from earliest times, as evidenced by his prominence in the Pyramid Texts, where he is portrayed as both a creator and father to a king.[2] Roles[edit] In the Old Kingdom the Egyptians believed that Atum lifted the dead king's soul from his pyramid to the starry heavens.[6] He was also a solar deity, associated with the primary sun god Ra. Atum is the god of pre-existence and post-existence. Iconography[edit]

Bastet Photograph of an alabaster cosmetic jar topped with a lioness, representing Bast, an 18th dynasty burial artifact from the tomb of Tutankhamun circa 1323 BC - Cairo Museum Bastet was a goddess in ancient Egyptian religion, worshipped as early as the Second Dynasty (2890 BC). As Bast, she was the goddess of warfare in Lower Egypt, the Nile River delta region, before the unification of the cultures of ancient Egypt. Her name is also spelled Baast, Ubaste, and Baset.[1] The two uniting cultures had deities that shared similar roles and usually the same imagery. Name[edit] Bastet, the form of the name which is most commonly adopted by Egyptologists today because of its use in later dynasties, is a modern convention offering one possible reconstruction. During later dynasties, Bast was assigned a lesser role in the pantheon bearing the name Bastet, but retained. The town of Bast's cult (see below) was known in Greek as Boubastis (Βούβαστις). She is also known as The Eye of Ra. Bubastis[edit]

Osiris Osiris (/oʊˈsaɪərɨs/; also Usiris), is an Egyptian god, usually identified as the god of the afterlife, the underworld and the dead. He was classically depicted as a green-skinned man with a pharaoh's beard, partially mummy-wrapped at the legs, wearing a distinctive crown with two large ostrich feathers at either side, and holding a symbolic crook and flail. Osiris is first attested in the middle of the Fifth dynasty of Egypt, although it is likely that he was worshipped much earlier;[4] the term Khenti-Amentiu dates to at least the first dynasty, also as a pharaonic title. Osiris was considered not only a merciful judge of the dead in the afterlife, but also the underworld agency that granted all life, including sprouting vegetation and the fertile flooding of the Nile River. Etymology of the name[edit] Osiris is a Latin transliteration of the Ancient Greek: Ὄσιρις, which in turn is the Greek adaptation of the original theonym in the Egyptian language. Appearance[edit] Ram god[edit]