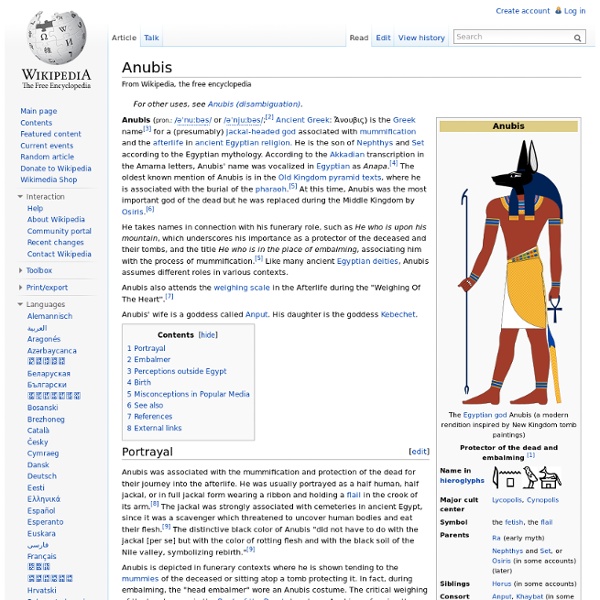 Anubis (/əˈnuːbəs/ or /əˈnjuːbəs/;[2] Ancient Greek: Ἄνουβις) is the Greek name[3] for a jackal-headed god associated with mummification and the afterlife in ancient Egyptian religion. According to the Akkadian transcription in the Amarna letters, Anubis' name was vocalized in Egyptian as Anapa.[4] The oldest known mention of Anubis is in the Old Kingdom pyramid texts, where he is associated with the burial of the pharaoh.[5] At this time, Anubis was the most important god of the dead but he was replaced during the Middle Kingdom by Osiris.[6] He takes names in connection with his funerary role, such as He who is upon his mountain, which underscores his importance as a protector of the deceased and their tombs, and the title He who is in the place of embalming, associating him with the process of mummification.[5] Like many ancient Egyptian deities, Anubis assumes different roles in various contexts. Portrayal[edit] Embalmer[edit] Perceptions outside Egypt[edit] Birth[edit] Gallery[edit] Related:  Gods and Godesses of Duat • lilipilyspirit

Osiris Osiris (/oʊˈsaɪərɨs/; also Usiris), is an Egyptian god, usually identified as the god of the afterlife, the underworld and the dead. He was classically depicted as a green-skinned man with a pharaoh's beard, partially mummy-wrapped at the legs, wearing a distinctive crown with two large ostrich feathers at either side, and holding a symbolic crook and flail. Osiris is first attested in the middle of the Fifth dynasty of Egypt, although it is likely that he was worshipped much earlier;[4] the term Khenti-Amentiu dates to at least the first dynasty, also as a pharaonic title. Most information available on the myths of Osiris is derived from allusions contained in the Pyramid Texts at the end of the Fifth Dynasty, later New Kingdom source documents such as the Shabaka Stone and the Contending of Horus and Seth, and much later, in narrative style from the writings of Greek authors including Plutarch[5] and Diodorus Siculus.[6] Etymology of the name[edit] Appearance[edit] Early mythology[edit]

Nephthys Etymology[edit] Nephthys - Musée du Louvre, Paris, France Nephthys is the Greek form of an epithet (transliterated as Nebet-het, and Nebt-het, from Egyptian hieroglyphs).The origin of the goddess Nephthys is unclear but the literal translation of her name is usually given as "Lady of the House," which has caused some to mistakenly identify her with the notion of a "housewife," or as the primary lady who ruled a domestic household. This is a pervasive error repeated in many commentaries concerning this deity. Her name means quite specifically, "Lady of the [Temple] Enclosure" which associates her with the role of priestess. Function[edit] Nephthys was known in some ancient Egyptian temple theologies and cosmologies as the "Useful Goddess" or the "Excellent Goddess".[2] These late Ancient Egyptian temple texts describe a goddess who represented divine assistance and protective guardianship. Triad of Isis, Nephthys, and Harpocrates. Pyramid Text Utterance 222 line 210.[11] Symbolism[edit]

Thoth Thoth played many vital and prominent roles in Egyptian mythology, such as maintaining the universe, and being one of the two deities (the other being Ma'at) who stood on either side of Ra's boat.[5] In the later history of ancient Egypt, Thoth became heavily associated with the arbitration of godly disputes,[6] the arts of magic, the system of writing, the development of science,[7] and the judgment of the dead.[8] Name[edit] Etymology[edit] The Egyptian pronunciation of ḏḥwty is not fully known, but may be reconstructed as *ḏiḥautī, based on the Ancient Greek borrowing Θώθ [tʰɔːtʰ] Thōth or Theut and the fact that it evolved into Sahidic Coptic variously as Thoout, Thōth, Thoot, Thaut as well as Bohairic Coptic Thōout. According to Theodor Hopfner,[12] Thoth's Egyptian name written as ḏḥwty originated from ḏḥw, claimed to be the oldest known name for the Ibis although normally written as hbj. Further names and spellings[edit] Depictions[edit] Attributes[edit] Mythology[edit] History[edit]

Freyja In Norse mythology, Freyja (Old Norse the "Lady") is a goddess associated with love, sexuality, beauty, fertility, gold, seiðr, war, and death. Freyja is the owner of the necklace Brísingamen, rides a chariot pulled by two cats, owns the boar Hildisvíni, possesses a cloak of falcon feathers, and, by her husband Óðr, is the mother of two daughters, Hnoss and Gersemi. Along with her brother Freyr (Old Norse the "Lord"), her father Njörðr, and her mother (Njörðr's sister, unnamed in sources), she is a member of the Vanir. Stemming from Old Norse Freyja, modern forms of the name include Freya, Frejya, Freyia, Frøya, Frøjya, Freia, and Freja. Freyja rules over her heavenly afterlife field Fólkvangr and there receives half of those that die in battle, whereas the other half go to the god Odin's hall, Valhalla. Etymology[edit] Attestations[edit] Poetic Edda[edit] Völuspá contains a stanza that mentions Freyja, referring to her as "Óð's girl"; Freyja being the wife of her husband, Óðr.

LUGHNASA © Anna Franklin Lughnasa, make known its dues, In each distant year: Tasting every famous fruit, Food of herbs at Lammas Day. Most Pagans know Lughnasa as one of the eight annual festivals but, historically, British witches were unique in celebrating Lughnasa. Lughnasa is a harvest festival, marking the end of the period of summer growth and the beginning of the autumn harvest. Assemblies on hilltops are a traditional part of the proceedings. The massive man-made Silbury Hill, 130 feet high, was in Neolithic times nearly 4,600 years ago. Lughnasa was a day for visiting wells and those on the Isle of Man were said to be at the peak of their healing powers. Late July and month of August are traditionally times for fairs; the weather would usually be mild and the ground suitable for travelling. Many traditional summer fairs are called 'wake fairs'. Even today the Irish still associate equine activities with this time of the year. to mind the deaths of both the Irish Lugh and the Welsh Llew.

Khepri Khepri (also spelled Khepera, Kheper, Khepra, Chepri) is a god in ancient Egyptian religion. Symbolism[edit] Khepri was connected with the scarab beetle (kheprer), because the scarab rolls balls of dung across the ground, an act that the Egyptians saw as a symbol of the forces that move the sun across the sky. Religion[edit] Appearance[edit] References[edit] ^ Jump up to: a b Wilkinson, Richard H. (2003). External links[edit] Media related to Khepri at Wikimedia Commons

Ra Ra /rɑː/[1] or Re /reɪ/ (Egyptian: 𓂋ꜥ, rˤ) is the ancient Egyptian solar deity. By the Fifth Dynasty (2494 to 2345 BC) he had become a major god in ancient Egyptian religion, identified primarily with the midday sun. The meaning of the name is uncertain, but it is thought that if not a word for 'sun' it may be a variant of or linked to words meaning 'creative power' and 'creator'.[2] In later Egyptian dynastic times, Ra was merged with the god Horus, as Re-Horakhty ("Ra, who is Horus of the Two Horizons"). All forms of life were believed to have been created by Ra, who called each of them into existence by speaking their secret names. Role[edit] Ra and the sun[edit] To the Egyptians, the sun represented light, warmth, and growth. Ra in the underworld[edit] When Ra was in the underworld, he merged with Osiris, the god of the dead, and through it became the god of the dead as well.[4] Ra as creator[edit] Iconography[edit] Ra was represented in a variety of forms. Worship[edit] Amun and Amun-Ra

Irish Soma Many scholars believe that the Indo-Europeans used an entheogenic or psychedelic drug in their rituals -- called soma amongst the Vedic people of India, and haoma in Iran. The ancient Greeks also used an ergot-based preparation in wine as the entheogenic trigger of the Eleusinian Mysteries. Soma has been identified as amanita muscaria or the fly agaric mushroom; haoma may have been the same, or it might be "wild rue," a harmaline-containing shrub (see Bibliography under Flattery and Schwartz). If there's any truth to these theories, we would expect to find that other Indo-European peoples also used such drugs shamanically or ritually. I consider it strange that in all the writing I've read about psychedelics, and about Ireland, not one text has connected the two subjects. Irish myths and legends were not written down till the Christian era, and then only by monks who might well have misunderstood or even censored any references to a soma-type substance or cult. St.