The Abominable Charles Christopher - A Webcomic by Karl Kerschl 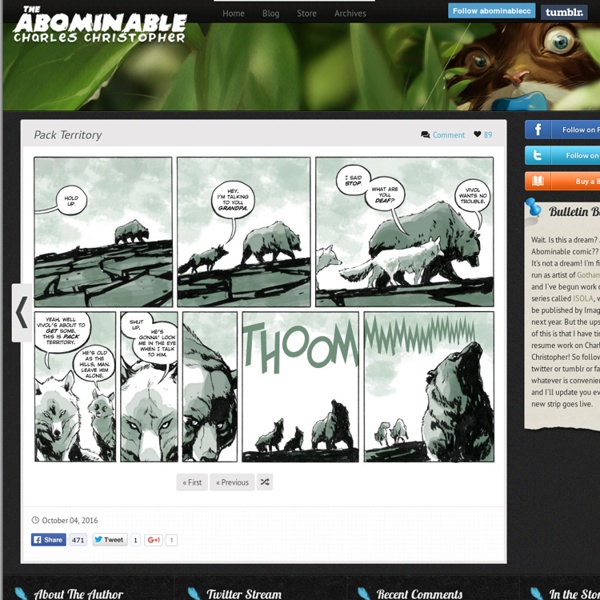 Happy 2014, everyone!I'm starting off the year with another Colouring Contest! Just like last time, you can download the page, colour it, and post it on the Abominable Facebook Page. I’ll pick the winner randomly from the entries and then replace the strip in the archives with the winning version, to be forever a part of the Charles Christopher timeline.The winner will also receive the Book Two Hardcover, personalized with a sketch of whatever animal you’d like. Deadline is January 31, so get colouring!

Petite Symphony KnuckleUp! As many of you have probably already noticed, Godai has started up another regular comic to post on Sundays. Join Rushana, Hawke, and Moon as they travel across the galaxy tracking down shards of a magical talisman in KnuckleUp! Also, Year of the Cow has been moved to hiatus for the time being while Simon and Dew tackle some life events. Comics This is a comic about the backfire effect. The first big expansion pack of Exploding Kittens is now shipping. It contains 20 game-changing cards, along with a human-sized cone of shame. I made a new thing. Next Page » QC: New Comics Every Monday Through Friday

copper Order the Copper book from Amazon | B&N | Indiebound | Scholastic Easel A parent theme for WordPress that has many adaptable hooks and filters to allow for an abundant of different addon’s and features. This theme has been designed from years of development of the ComicPress theme. Tech Support can be found in the forum. Features All of the latest and greatest features of WordPress 3.0Customizable layout’s via layout-head and layout-foot files.Hooks and Features for advanced customization and creation of Addons.Built as a parent theme to allow even more customization via child theme.A generic empty style.css with default style for when a child theme is not present.Plethora of additional widgets.Additional Avatar’s set creation ability for users who do not have a GravatarAssociated plugins that hook into the theme for yet, even more functionality.Multiple different layoutsSeveral different schemes (looks for the site) Addons

BRINK - You’re not as crazy as you think you are So here we are at the end, and pardon the use of cliches, but what a long, crazy ride it’s been. BRINK started back in 2006, and it seems fitting we end just shy of the original date it started over the 4th July weekend after attending Anime Expo so many years ago. This comic has always been, from it’s stat an experiment, one to test if I have the will power and dive to continuously update a story week to week, as well as push and play with visual story telling. Did everything turn out the way I had set it up in my mind almost 6 years later?