Rumor of Whitman County wolf attack on livestock is a lot of bull. WILDLIFE WATCHING -- Some smart asses had a lot of fun this week spreading rumors that wolves had attacked three horses near La Crosse, Wash. 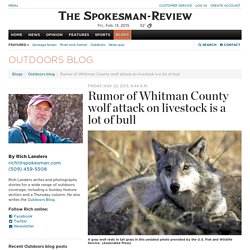 A Whitman County Gazette reporter tried to track down the word-of-mouth reports and so did several Washington Department of Fish and Wildlife police and biologists. "We tracked down the source and can verify there's no substance whatsoever to the rumors," Steve Pozzanghera, WDFW regional manager in Spokane, said this morning. He said the rumors were not even a case of mistaken identity, such as stray dogs attacking livestock or anything like that. Gray wolf delisting meeting in Sacramento tonight - News - Siskiyou Daily News, Yreka, CA - Yreka, CA. Untitled. Feds still gathering comments on wolf reintroduction plans.

Reviled, Revered: Is the Gray Wolf Still An Endangered Species? This post was updated on Nov. 21 to include more detail about California’s wolf listing process. 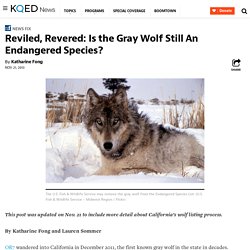 By Katharine Fong and Lauren Sommer OR7 wandered into California in December 2011, the first known gray wolf in the state in decades. Known by the code name given to him when he was tagged with a GPS collar, he caused quite a stir among everyone from environmentalists to cattle ranchers. Wolf delisting hearings underway this week. These are rescheduled hearings due to the government shutdown- Federal hearings on wolf delisting are underway at four locations this week. 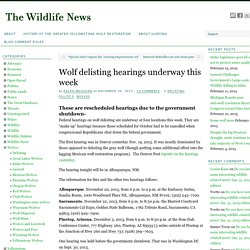 They are “make up” hearings because those scheduled for October had to be cancelled when congressional Republicans shut down the federal government. The first hearing was in Denver yesterday Nov. 19, 2013. Feds' push to end endangered protection for gray wolves ignites foes. California wolves: Endangered species needs help to be saved. By Amaroq Weiss Special to the Mercury News Posted: 11/20/2013 10:00:00 AM PST2 Comments|Updated: about a year ago. 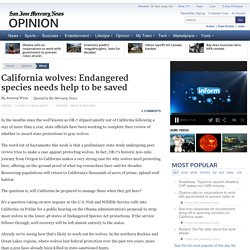 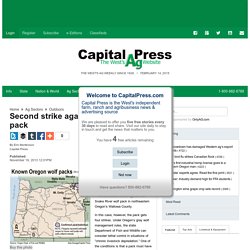 An attack on a calf in late October is the second strike against the Snake River wolf pack in northeastern Oregon’s Wallowa County. In this case, however, the pack gets four strikes. California set to deny protections for gray wolves. Home » Newsletters » Idaho Weekly Update John and Karen Hollingsworth/U.S. 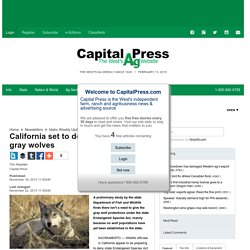 Fish and Wildlife Service. A Hastings-led howl against protecting wolves. Seventy-five members of Congress are demanding that the Obama administration end all protection of the gray wolf as “endangered” or “threatened” under the federal Endangered Species Act, in an effort organized by Rep. 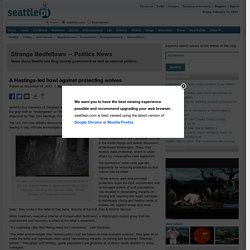 Doc Hastings, R-Washington. The U.S. Fish and Wildlife Service has already de-listed wolves in the Northern Rocky Mountains — leading to big, officially encouraged wolf kills, particularly in Idaho — and in the Great Lakes States. The gray wolf has moved south from protected lands on the U.S. -Canada border to repopulate the Washington Cascades, including the Teanaway Valley. In Washington, wolves are still under federal protection in the Cascades, but not in the Kettle Range and Selkirk Mountains of Northeast Washington. The lawmakers’ letter uses age-old arguments for removing protection so that wolves can be killed. Mitch Friedman, executive director of Conservation Northwest, a Washington-based group that has championed wolf recovery, scoffed at the letter’s assertions. Range riders help protect against wolves. TWISP — In a place where wolf recovery is about as divisive as politics or religion, one program is cutting through the controversy. 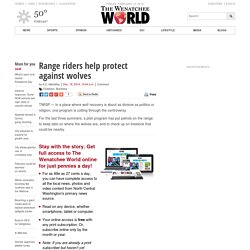 For the last three summers, a pilot program has put patrols on the range to keep tabs on where the wolves are, and to check up on livestock that could be nearby. Stay with the story. Get full access to The Wenatchee World online for just pennies a day! For as little as 27 cents a day, you can have complete access to all the local news, photos and video content from North Central Washington's primary news source. Two wolves split from Oregon packs, pair-up in new area. Wolf kills increase livestock deaths, WSU study says - Spokesman.com - Dec. 4, 2014. Rob Wielgus noticed something interesting when he studied reports of wolf attacks on sheep and cattle in the Northern Rockies. 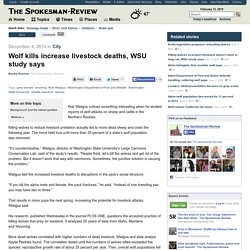 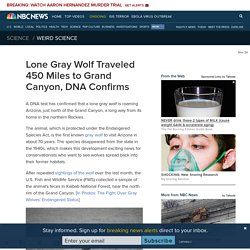 Dogs Can Tell the Difference If you ever get the impression that your dog can "tell" whether you look content or annoyed, you may be onto something. Dogs may indeed be able to discriminate between happy and angry human faces, according to a new study. Researchers trained a group of 11 dogs to distinguish between images of the same person making either a happy or an angry face.