The 14-Year-Old Voice of the Climate Change Generation 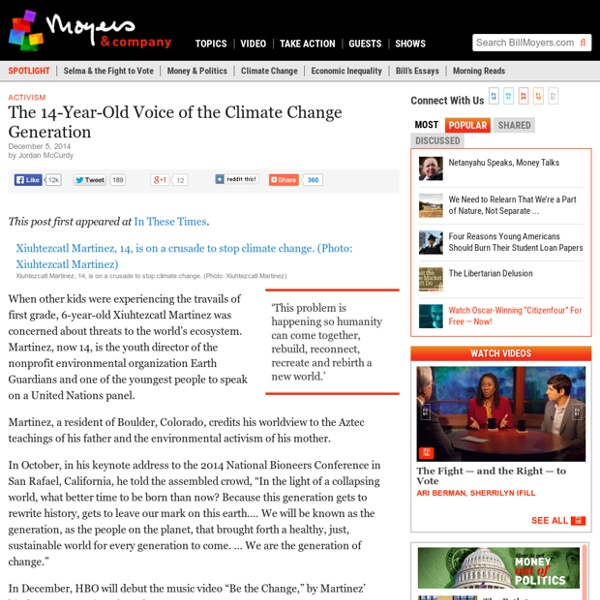 This post first appeared at In These Times. Xiuhtezcatl Martinez, 14, is on a crusade to stop climate change. (Photo: Xiuhtezcatl Martinez) ‘This problem is happening so humanity can come together, rebuild, reconnect, recreate and rebirth a new world.’ When other kids were experiencing the travails of first grade, 6-year-old Xiuhtezcatl Martinez was concerned about threats to the world’s ecosystem. Martinez, now 14, is the youth director of the nonprofit environmental organization Earth Guardians and one of the youngest people to speak on a United Nations panel. Martinez, a resident of Boulder, Colorado, credits his worldview to the Aztec teachings of his father and the environmental activism of his mother. In October, in his keynote address to the 2014 National Bioneers Conference in San Rafael, California, he told the assembled crowd, “In the light of a collapsing world, what better time to be born than now? In These Times spoke to Martinez about how to stop climate change.

Teens Sue Government for Failing to Address Climate Change for Future Generations Many young people feel they have too much at stake to wait for our leaders to get their act together and take meaningful action on climate change. In the words of one young climate activist, Alec Loorz, we need to demand our political leaders “govern as if our future matters.” With their future at stake, many youth have taken their case to the courts in the hopes that the judiciary will require the legislature to take action. “We are all in imminent danger,” Loorz, who founded the nonprofit Kids vs. On Bill Moyer’s show last month, Mary Christina Wood, law professor at the University of Oregon and author of Nature’s Trust: Environmental Law for a New Ecological Age, explains what is being called the “Children’s Climate Crusade.” What exactly are these young people asking for? The young plaintiffs simply want the courts to require “the legislatures and the agencies to do their job in figuring out how to lower carbon emissions,” says Wood. Turns out, yes. Divest Harvard Campaign Heats Up

Earth Guardians - Standing up for the Earth, Water, Air Xiuhtezcatl Martinez, a 13 year old indigenous environmental activist from Boulder, Colorado, came into the world through the Aztec culture on his father's side, and environmental activism on his mother's side. His name was chosen by Aztec elders of Mexico based on the cosmology of the Aztec calendar and given to him when he was six weeks old in the Black Hills of South Dakota by elders Arvol Looking Horse and Xolotl Martinez. Xiuhtezcatl has been participating in ceremonies and Aztec dancing since he could walk, and is very connected with his culture. He grew up learning to respect and care for the Earth and all life upon it. His deep connection with the Earth inspired him to become a voice for protecting the Earth at a young age, giving his first speech at a climate change rally when he was six years old (see He is currently working on helping fight for a statewide ban on fracking.

Nicole Maines, Transgender Student, Goes To Maine High Court BANGOR, Maine — Maine's highest court heard arguments Wednesday over whether transgender students can use the bathroom of their choice, and the girl at the heart of the case said she hoped justices would recognize the right of children to attend school without being "bullied" by peers or administrators. Nicole Maines, now 15, watched lawyers argue over whether her rights were violated when the Orono school district required her to use a staff bathroom after there was a complaint about her using the girls' bathroom. Maines said after the hearing in Bangor that she hopes the Supreme Judicial Court will ensure no one else experiences what she went though. "I hope they understood how important it is for students to be able to go to school and get an education and have fun and make friends, and not have to worry about being bullied by students or the administration, and to be accepted for who they are," said Maines, who now attends a high school in southern Maine.