Requiescat - chains_archivist. Main Content <p id="javascript-warning"> While we&#39;ve done our best to make the core functionality of this site accessible without javascript, it will work better with it enabled. 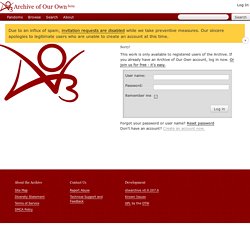 Please consider turning it on! </p> Archive of Our Own beta Log In Forgot password? Site Navigation Due to an influx of spam, invitation requests are disabled while we take preventive measures. Sorry! This work is only available to registered users of the Archive. Submit Forgot your password or user name? Footer Close. Choices - chains_archivist. Submit to Fate - The_Pied_Piper. :Within the Starship Hangar of the Palace of Nabu, tPM: The moment he entered the hangar, he knew. 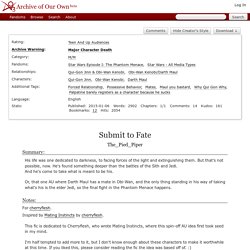 The sense, so base and primal within him, had been ignited only a few weeks prior. It had rocked the Zabrak to his core- confounded the dark teachings of the Sith within him. What he once forsook as a possibility now thrummed just as strongly within him as the force. And he would not, could not ignore it. Whatever happened, it was by the will of the force.

He lifted his head slowly, ignoring the weak citizen guard that surrounded the small ruler who had been his initial target. The younger, though… The blue eyes widened as the menace of Darth Maul’s presence hit him. His mate had been found. He sent out another wave into the force, a challenge. “We’ll handle this.” He had to rid himself of the Master. His chosen was… not eager for battle, but his actions spoke of rash and quick decisions, quickly trying to fight his way to victory. Fine, there’s more than one way to separate you. “Fool.” Equilibrium : Balance in the Force - glacis. Equilibrium : Balance in the Force. 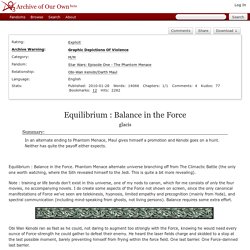 Phantom Menace alternate universe branching off from The Climactic Battle (the only one worth watching, where the Sith revealed himself to the Jedi. This is quite a bit more revealing). Note : training or life bonds don't exist in this universe, one of my nods to canon, which for me consists of only the four movies, no accompanying novels. I do create some aspects of the Force not shown on screen, since the only canonical manifestations of Force we've seen are telekinesis, hypnosis, limited empathy and precognition (mainly from Yoda), and spectral communication (including mind-speaking from ghosts, not living persons).

Balance requires some extra effort. Obi Wan Kenobi ran as fast as he could, not daring to augment too strongly with the Force, knowing he would need every ounce of Force-strength he could gather to defeat their enemy. Qui Gon was a master warrior as well as a Master Jedi, but Obi Wan could see that he was tiring. The Chosen Series - glacis. (Freedom's) Just Another Word - Carmarthen Juvenilia (Carmarthen) Obi-Wan frowned at his starship's screen. 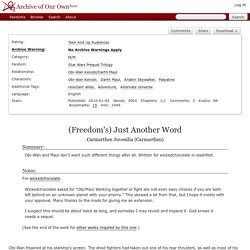 Madness (Mutual Assured Destruction) - glacis. Breaking the Chains, Forging the Links Chapter 1: Down, a star wars fanfic. Disclaimer: I do not own any of the original Star Wars characters. 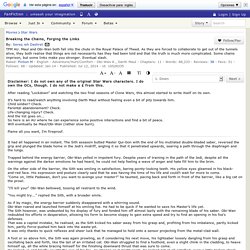 I do own the OCs, though. I do not make a £ from this. After reading "Lockdown" and watching the two final seasons of Clone Wars, this almost started to write itself on its own. It's hard to read/watch anything involving Darth Maul without feeling even a bit of pity towards him.Child soldier? Check.Parental abandonement? Flame all you want, I'm fireproof. It had all happened in an instant. Trapped behind the energy barrier, Obi-Wan yelled in impotent fury. On the other side of the barrier, the Sith was smiling in satisfaction, baring pointy-looking teeth. "I'll kill you! " "You might try... " replied the Sith, with a broader smile. As if by magic, the energy barrier suddenly disappeared with a whirring sound.Obi-Wan roared and launched himself at his smiling foe. Denying fate - Swagclops. Mating Instincts - cherryflesh.

If it had missed - BlueBastard. Disclaimer: I do not own Star Wars TPM -o-o-o- He had missed. 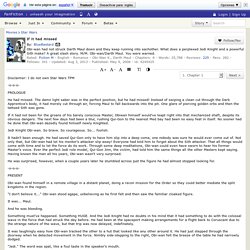 The damn light saber was in the perfect position, but he had missed! Instead of swiping a clean cut through the Dark Apprentice's body, it had merely cut through air, forcing Maul to fall backwards into the pit. One glare of piercing golden orbs and then the tattoed Sith was gone. If it had not been for the groans of his barely conscious Master, Obiwan himself would've leapt right into that mechanized shaft, despite its obvious dangers. Jedi Knight Obi-wan. It hadn't been enough. He was surprised, however, when a couple years later he stumbled across just the figure he had almost stopped looking for. Obi-wan found himself in a remote village in a distant planet, doing a recon mission for the Order so they could better mediate the split kingdoms in the region. "I don't believe it... " It was...