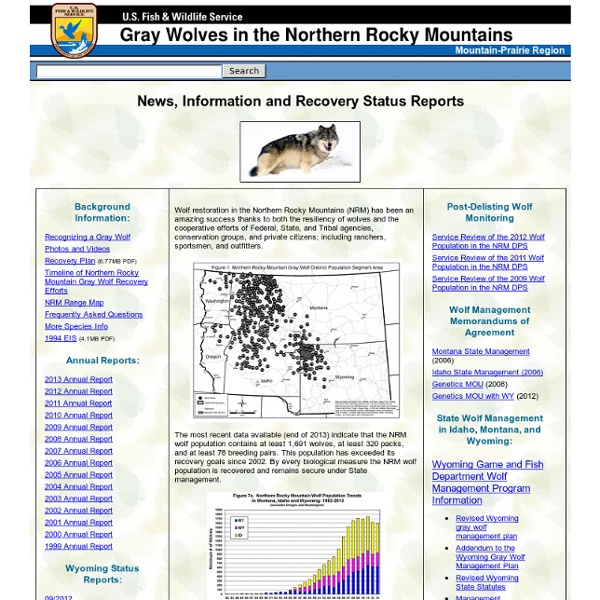 Wolf restoration in the Northern Rocky Mountains (NRM) has been an amazing success thanks to both the resiliency of wolves and the cooperative efforts of Federal, State, and Tribal agencies, conservation groups, and private citizens; including ranchers, sportsmen, and outfitters. The most recent data available (end of 2013) indicate that the NRM wolf population contains at least 1,691 wolves, at least 320 packs, and at least 78 breeding pairs. This population has exceeded its recovery goals since 2002. Long-term, the Service expects the entire NRM population to maintain a long-term average of around 1,000 wolves. The Service and our partners will monitor wolves in the region for at least 5 years to ensure that the population’s recovered status is not compromised, and if relisting is ever warranted, we will make prompt use of the Act’s emergency listing provisions. Recent Actions: February 2008 - Final Rule Establishing and Delisting the NRM Gray Wolf DPS Federal Register Notice Related:  Wolf Science • Learn More About Wolves

Salt Lake Tribune Extols Value of wolves Value of wolves Feds must maintain some oversight Jun 10 2013 The image of the government declaring “Mission Accomplished” is etched in Americans’ minds, and not in a good way. The U.S. The FWS has concluded the current number of gray wolves in the lower 48 states no longer qualifies it for listing under the Endangered Species Act, but rightly recommended the Mexican gray wolf remain listed as an endangered subspecies. The FWS will open a 90-day comment period on the proposal to seek additional scientific, commercial and technical information. Advocates for delisting the wolf say management decisions should be made at the state level, not by federal agencies, now that the reintroduction process is complete. Ranchers are compensated for livestock predation by wolves under the Endangered Species Act. The recovery of the gray wolf in the West is a dramatic success story. Like this: Like Loading...

Are Hunters Good Wildlife Stewards When It Comes To Wolves? Not According To This Study A new study likely to be controversial in some quarters suggests that hunters are not especially good wildlife stewards when the wildlife in question are wolves. While hunters long have been seen as conservation advocates for a wide range of species, when it comes to wolves the study by two University of Wisconsin-Madison researchers would seem to indicate that the only good wolf is a dead wolf in the hunter's mind. “Hunters were some of the least tolerant of wolves among our respondents, and the closer you got to wolf range the less tolerant they were,” said Adrian Treves, a professor in the UW-Madison Nelson Institute for Environmental Studies. Professor Treves and a colleague, Kerry Martin, took up a research project beginning in 2001 to survey hunters and non-hunters on attitudes toward wolves. One issue the two noted in trying to explain the perceived intolerance of hunters was that hunters often view wolves as competition for deer and other game.

Canis lupus 101 Colorado Parks & Wildlife - Gray Wolf Management Sign In Calendar FAQs Contact Us <div id="ctl00_ContentPlaceHolder1_SmallSearchInputBox1_noscript">It looks like your browser does not have JavaScript enabled. Please turn on JavaScript and try again.</div> Gray Wolf Management ​​​​​​​​​​​​​​​Biological & Ecological Information Economic Impacts Human-Wolf Interactions A Case History of Wolf-Human Encounters - McNay Impacts on Livestock and Livestock Loss Compensation Impacts on Wild Ungulates Legal and Regulatory Context Maps Wolf Management Plans from Other States Other Documents What real public information about wolves looks like Hard information about wolves or anything else does not come from rants- Discussion of politics and many other things, including wildlife, seems to have broken down. Instead of discussion, people yell. Very importantly, a number soldier on, citing scientific evidence and even providing footnotes. Norman Bishop in Bozeman is that kind of person. Bishop is giving a talk in Bozeman Feb. 11. Here it is, footnotes and all. The wolf issue: What science suggests; the players, and our role.By Norman A. I will briefly sample a few recent studies, many of which were enabled by wolf restoration, that may inform the issue of wolf management in the greater Yellowstone area. It may be useful to put three issues in perspective before we move on to the science that suggests a fresh look at our relationship to wolves: livestock depredation, human safety, and effects on big game hunting. About 2.6 million cattle, including calves, live in Montana. * What might be happening to the Clarks Fork elk?

Stalled Recovery Grey wolves have returned to Yellowstone National Park, raising hopes that the area’s ecosystem has bounced back. But the reintroduction of these mighty predators isn’t enough to enable a full recovery, scientists say. In the early 1900s, wolves largely vanished from Yellowstone. After wolves came back in 1995, elk numbers dropped. To find out if the ecosystem passed this test, the team measured willows at four sites in northern Yellowstone from 2001 to 2010. Even after 10 years, willows in the fenced plots without dams didn’t reach the 2-meter mark, the authors report. The study suggests that “effects of wolves alone were insufficient to restore riparian ecosystems,” the team writes. Source: Marshall, K.N. et al. 2013. Image © Dgrilla | Shutterstock.com

National Cattlemen’s Beef Assoc. has Beef With Mexicans… …Mexican Wolves, that is. Some people are never satisfied. Although there are only around 75 individuals remaining on Earth, the “Cattleman’s Beef Association” wants the government to remove the Mexican wolf from the federal list of endangered species and turn their “management” over to hostile states… NCBA, PLC call for full delisting of wolves nationwide National Cattlemen’s Beef Association | Updated: 06/10/2013 The National Cattlemen’s Beef Association (NCBA) and the Public Lands Council (PLC) expressed support for the proposal by the U.S. The wolf, placed on the list of endangered species under the Endangered Species Act (ESA) over three decades ago, has far surpassed FWS recovery goals across the country, according to NCBA President and Wyoming rancher, Scott George. “It’s time to turn management over to the states,” said George. “We appreciate FWS’ recognition that the gray wolf is recovered,” George stated. Like this: