The Science of Practice: What Happens When You Learn a New Skill 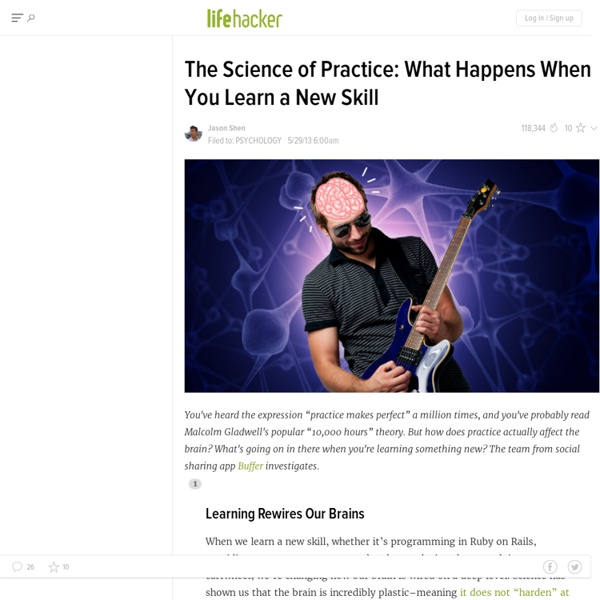 untitled Teen brain - science and risk Top Four 'Study - Atoms and Radiation' | Explore 1. Nuclear Radiation A good overview on the basics of radioactivity : the different types of radiation, sources, uses, dangers of radioactivity etc 2. Half life is the amount of time it takes for half of the atoms in a sample to decay. 4. Radiation can interact with surrounding matter to produce positively and negatively charged particles (a type of electricity). 7. This is what The Internet Plasma Physics Education Experience (IPPEX) is all about! Share: The folowing links are external

Teenagers and sleep - Family Lives Understanding your teen's body clock "My son David almost missed one of his GCSE’s this summer because he just can't get out of bed in the mornings," says 38 year old Ellen, from Huddersfield. "I have to leave the house at 7.30 and then I'm worrying the whole time, phoning him every 10 minutes to try and make sure he gets up on time for school. How hormones affect the teenage body clock Teenagers and their parents have very different body clocks. When it comes to sleep patterns, there are definite changes in teenagers - particularly around the timing of sleep, explains Neil Stanley, a sleep researcher at the University of East Anglia. Scientist David Bainbridge, author of "Teenagers: A Natural History" believes this is due to a 'rewiring' of the brain in adolescence which may mean that the teenage body clock runs more slowly than an adult's, making the day seem longer. David also says that teenagers haven't yet developed the mechanism required for registering fatigue.

Secrets of the teenage brain Several years ago Frances E Jensen’s 16-year-old son wrote off a car. A few years earlier, her other son had returned from a friend’s house with his hair dyed jet black. The University of Pennsylvania neurologist was finding her teenagers’ erratic behaviour increasingly taxing, so she decided to study teenage thought processes and gathered her research in the book The Teenage Brain. But does knowing what is going on in a teenager’s brain make them any easier to live with? Given that the relationship between parents and teenagers is one of the most fraught in family life, we asked readers to send in questions for Jensen to tackle. Clothes left in the bathroom, losing things, plates festering under the bed… Why doesn’t my teenager care about being tidy? Why does my daughter always seem so angry, especially with me? I feel increasingly cut out from my teenager’s life. Why won’t my teenager go to bed, and why can’t I get them up in the morning? My child loves playing video games.

Intro to Physics Fundamentals Course (Physics 101) When does the course begin? This class is self paced. You can begin whenever you like and then follow your own pace. It’s a good idea to set goals for yourself to make sure you stick with the course. How long will the course be available? This class will always be available! How do I know if this course is for me? Take a look at the “Class Summary,” “What Should I Know,” and “What Will I Learn” sections above. Can I skip individual videos? Yes! How much does this cost? It’s completely free! What are the rules on collaboration? Collaboration is a great way to learn. Why are there so many questions? Udacity classes are a little different from traditional courses. What should I do while I’m watching the videos? Learn actively!

Blame My Brain | Nicola Morgan The revised edition of Blame My Brain – The Amazing Teenage Brain Revealed - first published in 2005 and updated in 2007 and 2013. Signed copies available from my online shop, unsigned copies from all good shops, and the ebook from wherever you normally buy ebooks! BLAME MY BRAIN was shortlisted for the Aventis prize for science-writing, is internationally acclaimed, and has been reprinted many times and translated into other languages. It is highly unusual (possibly unique) in being written specifically for teenagers to understand their own brains. “Nicola Morgan has that rare gift of being able to communicate science and make it fun. “I want to say how much I enjoyed the book. “..really good and it taught me a lot about my brain.” “…and me a lot about my son!” I do many events for teenagers and for adults who wish to understand about teenage behaviour and be reassured about it. Scientists used to think that when we are born we have all the brain cells (neurons) we’ll ever have. “….