46 Ways To Start A Business With No Money 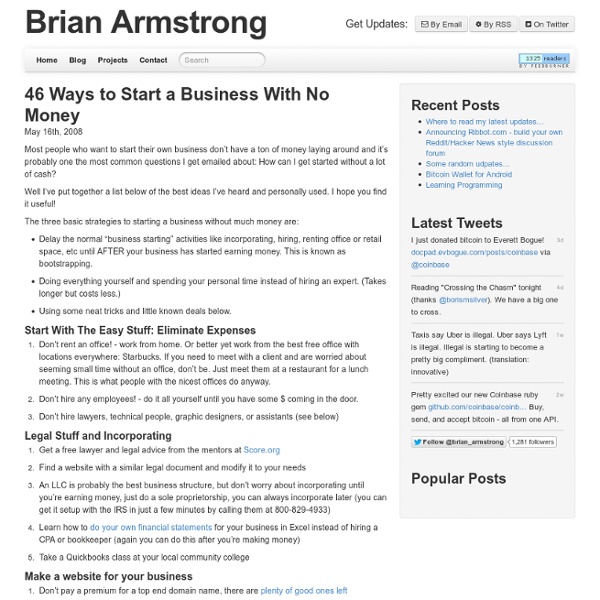 Most people who want to start their own business don’t have a ton of money laying around and it’s probably one the most common questions I get emailed about: How can I get started without a lot of cash? Well I’ve put together a list below of the best ideas I’ve heard and personally used. I hope you find it useful! The three basic strategies to starting a business without much money are: Delay the normal “business starting” activities like incorporating, hiring, renting office or retail space, etc until AFTER your business has started earning money. This is known as bootstrapping.Doing everything yourself and spending your personal time instead of hiring an expert. Start With The Easy Stuff: Eliminate Expenses Don’t rent an office! Legal Stuff and Incorporating Make a website for your business Getting a Logo Don’t hire a fancy graphic designer. Accepting Credit Cards Starting a service business where you consult, coach, teach, etc Creating Info Products Before investing in a retail location…

29 Ways to Collect Email Addresses for Your Business Looking for ways to grow your list of newsletter subscribers? There are a ton of ways to get people to sign up for your weekly or monthly email marketing campaigns. I’ve put together a list for you to read, so you have heaps of options for growing your list. Your Top 10 Boredom-Busting Websites Last week, we asked you what your go-to sites were when you hit the afternoon lull. We checked out all the boredom busters you sent in and let’s just say… it was hard to pull ourselves away! Some of our faves like Pinterest, Tumblr, Twitter, and HuffPo obviously made the list, but here are the 10 others that stood out. Some we’ve been addicted to for a while, some are new finds, all are great ways to kill some downtime.

10 Awesome Online Classes You Can Take For Free Cool, but you need iTunes for nearly everything, and that gets an 'F.' Are there really no other places to get these lessons? I was sure there are some on Academic Earth. Flagged 1. 7 of them are available via YouTube. 10 Blogs Entrepreneurs Need to Be Reading See the 2012 edition: 10 Must Read Blogs for Entrepreneurs (2012 Edition) #1. The Toilet Paper Entrepreneur Site: What it is: Starting a Business: Advice from the Trenches If you’re like thousands of other designers, programmers and other creative professionals out there, at one point in time you’ve considered starting your own business. Unlike most, you’ve gone against common sense and decided to open shop for yourself. And not just freelance full-time, mind you, but file for the company name, get some stationery, and wade through the legal mumbo-jumbo. Maybe even get a real office with a water cooler.

Why Atheism? Just about everyone is an atheist when it comes to other gods — the gods that other people believe in or that nobody believes in anymore. I’m an atheist about all gods because there's no reliable evidence for any god, or even for Jesus. There is also extensive evidence that Jesus and all gods are fictional characters — myths created mainly by primitive people who had little understanding of how our universe operates. We all like myths and other stories, but we don't have to believe them. 100 Ways to Become a Better Business Person Becoming a better business person doesn’t only mean having a better, bigger and more profitable business, company or enterprise, but more importantly, it also means becoming a better and more improved person. Well, it should be… since a “business person” is a combination of a business and a person. Now, here are 100 ways to help and guide us to become a better businessman or businesswoman. The list is long, hence, let’s get started. Becoming a better person

10 Must Read Blogs for Entrepreneurs (2012 Edition) Almost three years ago we posted “10 Blogs Entrepreneurs Need to Be Reading” and to this day it has remained the most popular post on the Grasshopper blog. While it’s an excellent list, we feel it’s time for an update. We bring you the 2012 version, 10 Must Read Blogs for Entrepreneurs. 1. For Entrepreneurs Link: 5 things that destroy a company’s value Imagine this: You build a tech company with lots of happy customers and an enterprise value of 1.0 times revenue. So you challenge the sales team, the company doubles its top-line revenue and achieves an enterprise value of .75 times revenue. Or less. This may sound ridiculous. 12 Lesser-Known Google Projects That Are Absolutely Amazing Google revolutionized the Internet by making the global brain easily searchable by anyone. In addition to search, Google has created all kinds of different tools like Google Maps, Gmail, Analytics, Android and Apps that many of us use everyday. One of the reasons why Google has consistently released new innovative project is because of their 20% time policy, which gives many of their employees one day a week to experiment with new concepts and ideas. This has resulted in many lesser-known creative projects that have emerged from within Googleplex.

FBI, stumped by pimp's Android pattern lock, serves warrant on Google The FBI can't get into a pimp's Android phone—so it wants Google to hand over the keys. In addition to accessing the phone, agents also want Google to turn over e-mail searches, Web searches, GPS tracking data, websites visited, and text messages. A federal judge has agreed. The 10 Best Games for Learning About the Stock Market Much like skydiving, playing the stock market is not an activity you want to learn through your mistakes. Fortunes are made and lost all the time by people who think (or thought) they had a handle on stock trading. If you have a few million you can afford to lose, or you're investing with someone else's money (you're a bank, in other words), by all means, jump right in. But for the other 99%, we recommend simulating the experience of stock market investing first, to learn what to do and not do with your hard-earned cash. Here are the 10 best games to help you do that. WeSeed:While some of the games on this list may be more concerned with purveying entertainment than education, WeSeed's No. 1 goal is to teach people about the stock market and take the fear out of investing.

Tutorials Ponzimonium After Bernard Madoff's $65 billion Ponzi scheme was revealed, many new (smaller-scale) Ponzi schemers became exposed. Ponzimonium ... Quarterly Earnings Report A quarterly filing made by public companies to report their performance. Included in earnings reports are items such as net ... Dark Pool Liquidity The trading volume created by institutional orders that are unavailable to the public.