Are You Building The Right Product? 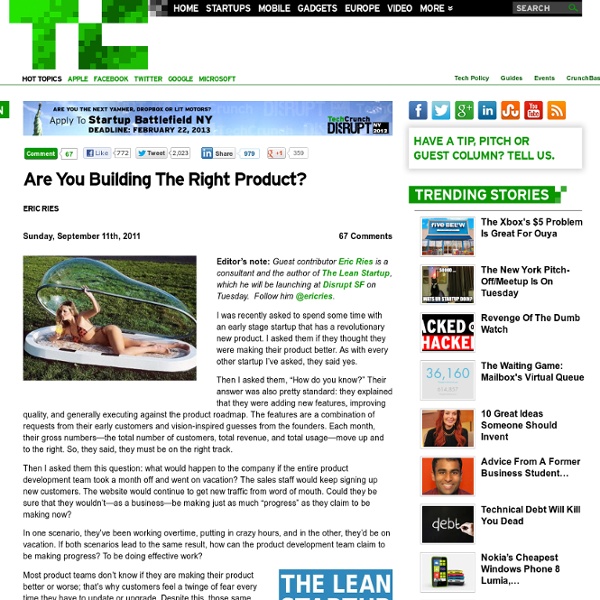 Editor’s note: Guest contributor Eric Ries is a consultant and the author of The Lean Startup, which he will be launching at Disrupt SF on Tuesday. Follow him @ericries. I was recently asked to spend some time with an early stage startup that has a revolutionary new product. I asked them if they thought they were making their product better. Then I asked them, “How do you know?” Then I asked them this question: what would happen to the company if the entire product development team took a month off and went on vacation? In one scenario, they’ve been working overtime, putting in crazy hours, and in the other, they’d be on vacation. Most product teams don’t know if they are making their product better or worse; that’s why customers feel a twinge of fear every time they have to update or upgrade. In one of the startups I founded, we had an extended period where we were really focused on the conversion rate of new customers into paying customers (it was a freemium business model). Related:  Start-ups & Entrepreneurship • Product building

Steve Jobs of Apple Dies at 56 The death was announced by Apple, the company Mr. Jobs and his high school friend Stephen Wozniak started in 1976 in a suburban California garage. A friend of the family said the cause was complications of pancreatic cancer. Mr. He underwent surgery in 2004, received a liver transplant in 2009 and took three medical leaves of absence as Apple’s chief executive before stepping down in August and turning over the helm to Timothy D. “I have always said that if there ever came a day when I could no longer meet my duties and expectations as Apple’s C.E.O., I would be the first to let you know,” Mr. By then, having mastered digital technology and capitalized on his intuitive marketing sense, Mr. Tributes to Mr. “For those of us lucky enough to get to work with Steve, it’s been an insanely great honor,” said Bill Gates, the Microsoft co-founder. A Twitter user named Matt Galligan wrote: “R.I.P. Eight years after founding Apple, Mr. Mr. It was an executive style that had evolved.

How to nail your product market fit and sales pitch with a value proposition diagram Products aren’t sold in isolation - they exist within ecosystems. Great product market fit and sales pitches hinge on understanding and serving all the members of an ecosystem. Should a product fail to meet the needs of any one member, company success and sales velocity will falter. One tool I use with portfolio companies is the Value Proposition Diagram (VPD) which shows why a product is compelling to every customer - and most products are sold to more than one customer at the same time. I’ll walk through three examples of the VPD: Google AdSense, Expensify and Axial Market. A VPD has three columns: the product, the customers and the value proposition for each customer. Google’s AdSense enables publishers to run ads on their websites to generate revenue. The user is the most important. The advertiser follows the user in importance. That’s the genius of AdSense: ad relevancy aligns the incentives of everyone in the ecosystem. Expensify builds expense management systems for SMBs.

jess by jess Do Things that Don't Scale July 2013 One of the most common types of advice we give at Y Combinator is to do things that don't scale. A lot of would-be founders believe that startups either take off or don't. You build something, make it available, and if you've made a better mousetrap, people beat a path to your door as promised. Or they don't, in which case the market must not exist. [1] Actually startups take off because the founders make them take off. Recruit The most common unscalable thing founders have to do at the start is to recruit users manually. Stripe is one of the most successful startups we've funded, and the problem they solved was an urgent one. Startups building things for other startups have a big pool of potential users in the other companies we've funded, and none took better advantage of it than Stripe. There are two reasons founders resist going out and recruiting users individually. The other reason founders ignore this path is that the absolute numbers seem so small at first. Fragile Fire

Instagram And Intuit Founders Discuss Lean Startups, Pivots, And What Makes A Product Successful Today at TechCrunch Disrupt, Founder of Intuit Scott Cook, writer and former CTO at IMVU Eric Ries, and Instagram Co-founder Kevin Systrom gathered to discuss concepts from Ries’ new book, The Lean Startup. While “lean” is thrown around a lot as modifier for contemporary businesses, Ries said that with his book he hopes to clear up one of the big misconceptions in defining the term; for starters, “lean” does not mean being cheap or frugal, it’s about being efficient and taking a smarter approach to the development of your product. By way of example, Ries cited his favorite entrepreneurial movie, Ghostbusters, as the classic model for the development stages of startups. Act 1, he said, is all about who the guys are and how they come up with their great idea, whereas Act 3 finds them on the cover of magazines, having hit the big time. “I got sick of wasting months and years of engineering time on products that just weren’t going anywhere and weren’t changing customers lives”, Cook said.

Evernote's 5% problem offers a cautionary lesson to tech companies | VentureBeat | Business | by Chris O'Brien Looking back at Evernote’s fall from grace, it’s clear the problems were already apparent to the company when I sat down to interview then-CEO Phil Libin in August 2013. On the surface, Evernote was on a roll. It had just moved into a new headquarters. Still, the conversation was mostly upbeat, with Libin talking about his vision for building a company that would last 100 years. We were talking about how Evernote was often lumped in with other companies (Dropbox, Box) that let you share and store files online. He conceded that Evernote had so many features, in fact, that it could sometimes be difficult to explain to newcomers exactly what Evernote was: “What winds up happening at Evernote conferences is that people go and they say, ‘Oh, I love Evernote and I’ve been using it for years and now I realize I’ve only been using it for 5 percent of what it can do,’ ” Libin said. Evernote had spread itself too thin, and there was no core experience. But adding new features requires discipline.

Oliver Samwer walks out of an interview with TechCrunch The three Samwer brothers (Oliver, Marc and Alexander) founders of the Rocket Internet incubator in Berlin, are a phenomenon. They are far and away the most successful Internet entrepreneurs in Germany. They have launched and exited at least six major startups since the late 1990s, from ebay clone Alando (€48m to eBay), Jamba (€228m), StudiVZ (€85m), MyVideo (€27m), BigPoint (€100m), and the latest, Groupon clone CityDeal to Groupon for an estimated €750m in cash and shares. And yet they remain famously publicity shy. I personally have asked for an interview since at least 2009. So when I was offered the chance to interview Oliver Samwer – considered by many to be the heart of the operation – I jumped at it. The young student organisers of IdeaLab faithfully checked and re-checked that Oliver would do an interview.

The big businesses learning how to think small 14 October 2011Last updated at 00:08 By Dave Lee Technology Reporter, BBC News In times gone by, marketing was all about massive names and expensive campaigns "We're the biggest start-up on the planet." Of the many quotes recited in the days following the untimely death of Steve Jobs, it is perhaps that one, told to a conference in 2008, that resonates most with the many businesses admirable of Apple's success. His insistence on "no committees" and talking to everyone at least once a week was, he said, enough to keep Apple focused, efficient and successful. For big corporations, with their vast resources and bewildering bureaucracy, operating with the attitude of a technology start-up is at once terrifying and yet also a distant dream. "Start-ups try, they fail, they adapt, they move on. "In our marketing, we tend to make a campaign, put it out there and hope it works." Nimble Instead, and to the great surprise of many, they splashed out on a $20m social media campaign. “Start Quote

For the process of agile development: "If this is sounding to you 'just like' the scientific method, you’re right, it is. Most of us are currently doing product development astrology, not science. But it doesn’t have to be that way. We can do much, much better." by jbondslopez Sep 12