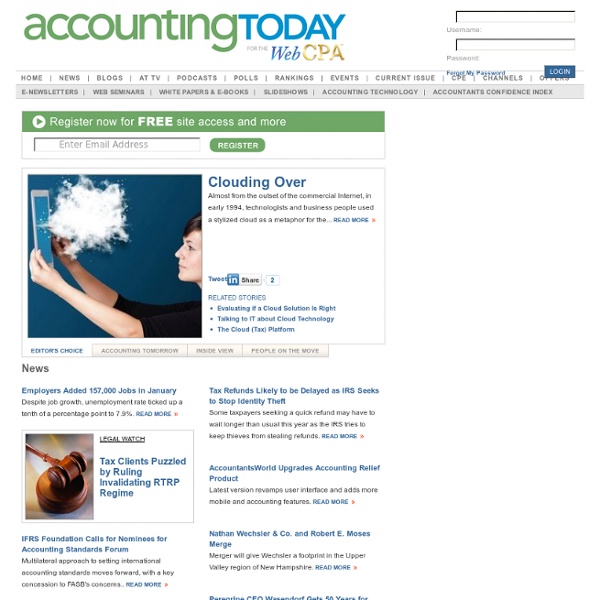 Top 5 Places to Work Online and Make Money - JamieNorthrup.com There are literally hundreds, if not thousands of ways to make money online. All of these ways are derivatives of two basic ways, which are selling your own products & services, and selling other people’s products & services. Each has their advantages and disadvantages, and I personally do a little of both. Today’s post is basically to show you a few of my favorite places to work online. I do offer web services and have my own websites to make money as well, but now we will focus on other places I go to make even more money. Here are the top five places I do a lot of my online work:

14 Ways to Accept Mobile Payments Looking to convert your tablet into a point-of-sale (POS) system for your business? Need a way to accept credit cards on your smartphone? There are dozens of services out there for those in need of simple, mobile solutions for business. Pulling the Capex Lever - Utilities Article Companies across all industries have room to grow in optimizing "return on capex." The fundamental questions of how much to spend, what to spend it on, and how to transform the investment into real returns must be answered in a radically different way. Capex spending—never far from a CFO's agenda—has been getting more than its usual amount of attention lately. One reason is its sheer size.

The 50 Best Careers of 2010 It's not a little bit optimistic to be establishing a list of best careers now, at the tail end of a particularly hard-knocks recession that has helped put 15.4 million Americans out of work. That's particularly so because no industry or occupation was spared the misery of layoffs, hiring freezes, benefit cuts, and general anxiety. But some industries were much safer harbors for workers than others. Healthcare, most notably, managed to expand its payrolls, though not at the clip customary for a healthier economy. It's clear that the recession is ending and that employers aren't slashing jobs with the blunt instrument they used over the past two years, but many unemployed workers and college students have a question that can't be answered by upticks in the GDP, namely: Where on earth will the jobs be? [Slide Show: America's Best Careers 2010.]

How new UK spouse visa rules turned me into an Englishman in exile Think of exiles in modern history, and you think of people forced to live away from where? Castro’s Cuba? Franco’s Spain? Apartheid South Africa? We actually want you to be honest.: 21 Things Hiring Managers Wish You Knew - US News & World Report I see too many job applicants who approach the interview as if their only goal is to win a job offer, losing sight of the fact that this can land them in the wrong job. Think of it like dating. This means being honest about your strengths and weaknesses and giving the hiring manager a glimpse of the real you, so he or she can make an informed decision about how well you’d do in the job. Alison Green writes the popular Ask a Manager blog, where she dispenses advice on career, job search, and management issues. She's also the author of Managing to Change the World: The Nonprofit Leader's Guide to Getting Results. Next: We pay attention to the small stuff.

Research By Rebecca Hill Research Fortnight Kudos, an online service set up by publishing consultant Melinda Kenneway and two colleagues, aims to help researchers get their work noticed in an increasingly competitive environment. “The Kudos idea acknowledges that publication is still the heartbeat of research; it’s what people are judged on,” Kenneway says. “We’re in a world where the range of metrics available will grow significantly and researchers must make sure their articles are as widely read as possible.” She says that when the team spoke to researchers about making the most of their papers, it found some to be “very savvy”, whereas others “didn’t have a clue”.

The Top 50 Companies to Work For Facebook, the social networking giant, has landed the ultimate compliment from its employees: ranking No. 1 on a newly-released list of 50 best places to work. The list, which is based on surveys of company employees, is produced by Glassdoor.com, a website that offers insight into careers and companies, as well as job listings. Southwest Airlines ranked second, and Bain & Company, a business consulting firm, came in third. Facebook ranked well because, like other companies on the list, it has a strong and distinct workplace culture, says Robert Hohman, co-founder and CEO of Glassdoor.com. The Cellular Shaman: How Cells Can Shape-Shift & Transform Our Consciousness The following is excerpted from Secrets of Your Cells: Discovering Your Body's Inner Intelligence published by Sounds True. A Shamanic Doorway - Crossing Over When I first took off my lab coat to spend time with children as the balloon lady on the pediatric floor of the hospital, I formed a special bond with a five-year-old boy named Alvaro, who had been diagnosed with leukemia. When his leukemia returned after a year of remission, I was overwhelmedhis death seemed inevitable, and I didnt know what to do. I called on the support of Dr. Tomas Pinkson, a psychologist who was clinical director for the Center for Attitudinal Healing at the time.

7 Sites That Will Help You Get Hired When it comes to careers, who doesn't need a little help? It's not just the 14.6 million unemployed, but the millions of employed who are stuck in comatose companies or dead-end jobs. While there are plenty of websites that have useful information for job seekers today, many people still look to the web largely to find job openings. Here are seven sites that stand out for their intelligence, niche, data, or usefulness, rather than their job listings: Fistful of Talent: Reading the posts on this blog is like listening to a lunchroom full of human resources professionals, hiring managers, and recruiters talk about their likes, dislikes, and strategies. You'll learn things like how recruiters find candidates online, the kinds of questions they like, or their worries about the recruiting process.

10 Little Positive Habits that Can Change Your Life Here are 10 positive habits that you can consider incorporating into your routine. Quite often we get so caught up in day-to-day activities that we get distracted from thinking about and developing little positive habits that could make the difference between having an okay day and a upbeat, positive day. Some of them may seem so simple and obvious that we don’t even think of implementing them regularly. The 10 Most Common Job Interview Questions The absolute best thing you can do to prepare for a job interview is to practice your answers to the questions you’re most likely to be asked. Saying your answers out loud – over and over – or even writing them down, which might ingrain them more deeply in your brain, will significantly improve how well you perform when you’re sitting in that interview chair. Here are the 10 questions you’re most likely to be asked in a job interview: