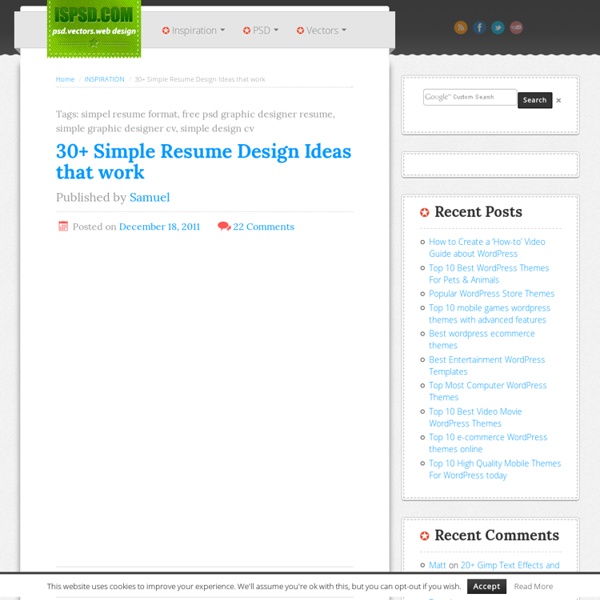 About ISPSD ISPSD focuses on Web Development , Graphics Elements along with Inspirational articles and also providing free PSD downloads for web designers .We are a small team right now who create different content types to make ISPSD a better design community. Our users are gathering free resources from public sources on the internet. Most of the content available here are free for commercial use and only some are strictly educational. We make sure not to violate copyright policies, please contact us here if you find any violations and we will remove it as soon as possible.

Related:  Career • What We Do

10 Things You Should Know About Your Job Interviewer Ever wonder what's going through the mind of the person sitting across from you at your job interview? Here are 10 things that you might not realize about your job interviewer. 1. We want to find the best person for the job. Because interviews are stressful, it's easy for a job candidate to start feeling like the interviewer is an adversary, but it's really the opposite--interviewers go into every interview hoping you'll be the right candidate. After all, we have a vacancy on our team, and we're highly motivated to find someone who's a great fit to fill it. Is “bespoke” the ultimate branding? Please note that this post was originally published on August 30, 2011. As a result, any external links or videos used may no longer be functional. Once upon a time, every object created by humans was made by hand. Mass production changed all of that. Beginning in the 1920s, machine tools, interchangeable parts and assembly lines made more goods available to more people at lower prices. The trade-off?

40 Most Creative Resume Design Ever Seen Been a while since you dusted off your resume, added in your most recent work and gave it a facelift? Before you do that, check out these examples for inspiration. A well-crafted resume is a great way to stand out as a candidate, and it’s not the easiest task to balance form and function with the opportunity to show off your design chops. Have a look at what other designers are doing before you head back to the drawing board, and remember: a resume’s most important function is give a potential employer a good idea of your experience as quickly as possible. Design acrobatics are secondary to that. 1.

Architecture architecture Renzo Piano piece by piece The “Barbara Cappochin” International Architecture Biennale mounts an exhibition on the Genoese architect in Padua The Pritzker Prize to Shigeru Ban "I see this prize as encouragement for me to grow" ﻿﻿﻿Copenhagen Architecture Festival x FILM 55 Examples of Light and Clean Resume Designs Have a creative resume is important, because it will speaks your capability and cretivity. And clean design it will give a professional, clean impression to employer. In this showcase article we have collected 55 examples of creative resume with clean design style, I hope they will inspire you in designing your own creative resume that represent yourself.

Give your résumé a face lift After avoiding the 7 deadly sins of résumé design, you may be asking, “If I can’t use crazy colors, clip art, and other types of decoration, how do I make my résumé stand out from the crowd?” Like many things, the answer lies in the details. Even if you can’t hire a fancy designer and are stuck with Microsoft Word, a few tweaks can turn your blasé résumé into an elegant and functional showpiece. Update (Oct 25): As promised, here’s a template of the final résumé. Please credit this site, LifeClever, if you post it elsewhere. Thanks! The Role of Education in Entrepreneurship - ReadWriteStart On Wednesday of this week, Flickr and Hunch co-founder Caterina Fake wrote a provocatively titled blog suggesting that wanna-be entrepreneurs should drop out of college. She based this opinion on the amount of successful companies founded by drop-outs, including Facebook, Twitter, Apple and Microsoft, as well as the drop-outs she finds herself investing in as an angel. But should education play such an insignificant role in entrepreneurship? The answer is not as simple as some think. As with many blogs by intellectual authors, the comments they elicit are often as good, if not better reads that the original post itself.

7 Ingenious Resumes That Will Make You Rethink Your CV You love resumes. You really do. When we published "10 Creative Social Media Resumes To Learn From" in May, our readers enthusiastically responded by sharing it with friends, commenting on it and sending us links to their own snazzy resumes.