Should Startups Focus on Profitability or Not? 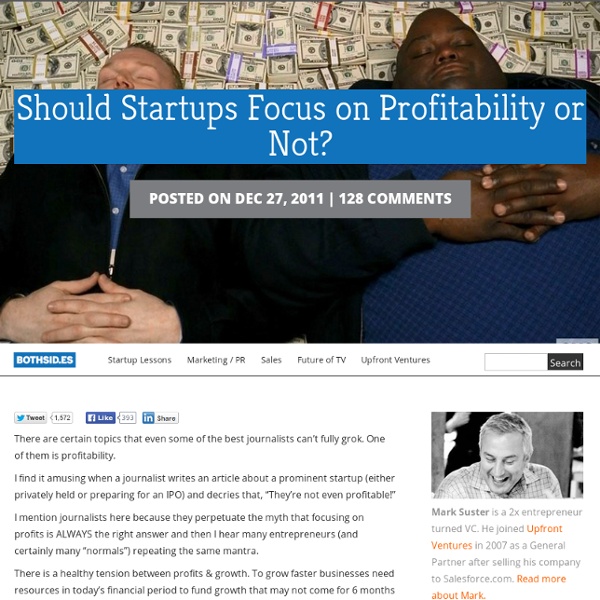 There are certain topics that even some of the best journalists can’t fully grok. One of them is profitability. I find it amusing when a journalist writes an article about a prominent startup (either privately held or preparing for an IPO) and decries that, “They’re not even profitable!” I mention journalists here because they perpetuate the myth that focusing on profits is ALWAYS the right answer and then I hear many entrepreneurs (and certainly many “normals”) repeating the same mantra. There is a healthy tension between profits & growth. If you hire 6 sales reps in January at $120,000 / year salary then you’ve taken on an extra $60,000 per month in costs yet these sales people might not close new business for 4-6 months. I know this seems obvious but I promise you that even smart people forget this when talking about profitability. Hiring more people isn’t always the right answer. Exec Summary: Most companies (98+%) in the world (even tech startups) should be very profit focused. Um, no,

How Facebook will take over the rest of the world in 2012 It’s hard to believe that in 2009, Facebook was insignificant compared to the rest of social media. Even harder to fathom is that one year later, Facebook asserted its dominance and became the undeniable leader of the social landscape, representing more than 50 percent of all time spent on social websites. It wasn’t certain whether Facebook’s fame would be fleeting, especially in the wake of privacy concerns, but in 2011, this doubt was put to bed when Facebook became the only social platform that mattered. Facebook now represents 95 percent of the time spent on social services and boasts nearly one in seven of the world’s population as users. Facebook’s dominance in social makes Google’s dominance in search look like child’s play. The question for 2012 is whether or not any other company with skin in the social game can matter again. While 2011 was the year Facebook unquestionably dominated social media, 2012 will be the year Facebook takes over the world. It’s an app world.

The Social Conglomerate When news of the Facebook/WhatsApp deal broke, a lot of people gave me credit for being prescient: after all, I had just written 1,568 words on why messaging was mobile’s killer app. WhatsApp, though, was all but absent from the article, meriting but a single mention, and in parenthesis at that! Viber does have strong user numbers, claiming 280 million registered users and 100 million monthly active users, and that is certainly a big part of the battle, but the creation of a meaningful platform is a significant next step that Viber (and WhatsApp) has not taken. A platform is about multi-sided markets; LINE and WeChat are so valuable because they not only have the users, but also advertisers, commerce sites, and developers. Thus, while I’m skeptical of Rakuten and Viber, for LINE and WeChat the sky is the limit. Thus the reason for the exclusion: I believe that business models matter, and while WhatsApp had the users, I’d heard enough about their (admirable!) The Age of Conglomerates

How Many Hours Should a Startup Employee Work? Every so often I get drawn into the debate about startup employees and how much they should work. Should you hire workaholics? Is it expected that startup employees work 100+ hours per week? Should they be online all the time, constantly available and ready to go? It depends. But it got me thinking… One of the big problems I’m seeing with a startup’s expectations for “hours worked” is that they use it as a metric of employee quality and success. We need to think about other measurable indicators of an employee’s quality and value. I’m not arguing against a startup’s need to move insanely fast. image courtesy of shutterstock

A six-step framework to make strategic decisions Any number of challenges can arise during a startup’s initial years. Some of these changes could be major and may require rethinking strategy. Competitors enter your target market. New products are released into your market which undercut yours. Customer acquisition costs rise dramatically. If faced with these questions, it’s hard to know where to begin or how to structure an analysis to reach an answer. McKinsey uses a 6 step process to frame the process of answering these strategic questions which is profiled in this month’s Harvard Business Review. Case: A new competitor emerges to compete with a startup Frame the strategic choices as mutually exclusive options. By definition strategy is critical to companies.

Is There A Peak Age for Entrepreneurship? Editor’s note: Adeo Ressi, is the founder of The Founder Institute and TheFunded.com In this guest post he argues against ageism when it comes to to entrepreneurs. Ressi is 39. The recent articles proclaiming that 25 is the peak age for entrepreneurship deserve a considered and factual response. Anecdotal Evidence: It does not take but one minute to look around the world and prove any thesis of a peak tech founder age incorrect. A commonly held belief is that younger founders appear to inspire waves of innovation, like in the mid-1990s and even today with Facebook, while older entrepreneurs launch sustainable businesses. Anecdotal data is at best inconclusive. In some cases, older entrepreneurs paired up with the younger founders, like Google (Larry Page and Sergey Brin were both age 25 in 1998, and Eric Schmidt was age 46 in 2001). Anecdotal evidence, personal stories, and biased sample sets are not the best way to draw meaningful conclusions, so let’s look at some facts. Factual Data:

The Market Size Fallacy The Market Size Fallacy November 10, 2011 I once showed a company to an investor for an investment we were syndicating. This investor loved the team and thought the solution they were building was compelling. Similarly, I remember years ago when I was looking at the series A investment in a company called Lumos Labs. His answer was so simple, and at the time, I kind of dismissed it as the view of an angel investor who didn’t really “think like a VC”. VC’s pass because of “Market Size” all the time. The problem with the market size feedback is that entrepreneurs end up being stuck. The investors just don’t believe that you can simply sell lots and lots of games. If this is the case, then there is actually hope! Parting thought #1 – funny enough – in the first example above, the investor actually asked to be kept in the loop for the next round of financing. Go figure.

Ten things top entrepreneurs do differently Often, entrepreneurs are characterized as the “rock stars” of the business world. This romantic vision is appealing but, like most stereotypes, a far cry from reality. So, what makes a good entrepreneur great? There’s no entrepreneurship gene. But a new Ernst & Young survey shows leading entrepreneurs do share common traits, beliefs and approaches that empower them to drive innovation – and economies – around the world. 1. Fifty-eight per cent of entrepreneurs we surveyed have “transitioned” to entrepreneurship, and one-third say their experience as an employee enabled them to build a successful enterprise of their own. 2. More than three-quarters of Canadian respondents are mentoring other entrepreneurs in some form. 3. Accessing funding is the top challenge facing entrepreneurs today, and a real stumbling block to startup success. 4. 5. All founders of growing companies face a central decision: do they desire wealth or hands-on involvement? 6. 7. 8. 9. 10.

The Apple Tesla Connection: Fun and Reason With Numbers Apple acquiring Tesla would make for juicy headlines but would also be very dangerous. There are more sensible ways for the two companies to make money together. Apple has never suffered from a lack of advice. As long as I can remember — 33 years in my case — words of wisdom have rained down upon the company, and yet the company stubbornly insists on following its own compass instead of treading a suggested path. (Actually, that’s not entirely true. Now that Jobs is no longer with us and Apple’s growth has slowed, the advice rain is more intense than ever… and the pageviews netwalkers are begging for traffic. The visionary sheep point to the titanic deals that other tech giants can’t seem to resist: Google buys Nest for $3.3B; Facebook acquires WhatsApp for $16B (or $19B, depending on what and how you count). Lately, we’ve been hearing suggestions that Apple ought to buy Tesla. Indeed, Adrian Perica, Apple’s head of acquisitions, met Tesla’s CEO Elon Musk last Spring. –JLG@mondaynote.com