Blueeconomy: Green Economy 2.0 -The Community functions as a platform for companies, innovators and scientists. 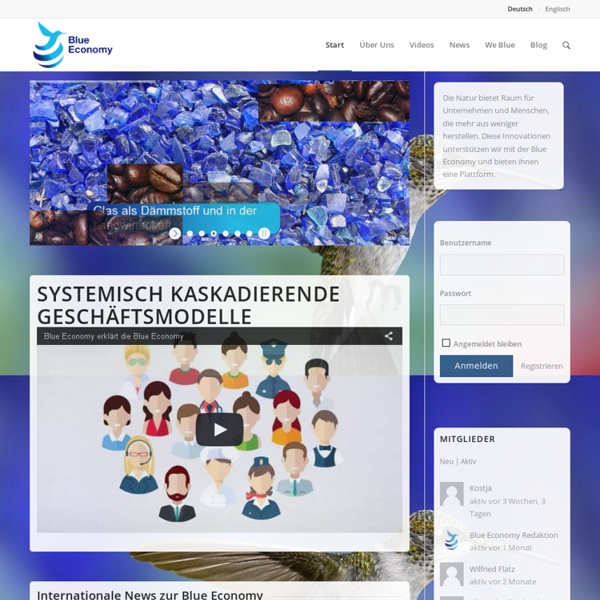 The Future of Management: Is it Deja vu all over again? If you are a regular reader of the MIX, you probably already have a point of view on the future of management. Indeed, the MIX was created to help accelerate the evolution of management, so chances are you have already bought into the argument that we are going through a period of upheaval that will transform the way we work in organizations in the years ahead. I hope and believe this argument is right. And in future blog posts on this site I will discuss examples of some of the changes in management that are currently underway. But let me develop a contrarian line of argument first, before offering a synthesis. Here's the problem with all this talk of virtual and networked organizations, and this vision of empowered and engaged employees. So there is an enduring puzzle that we need to come to grips with. Why is this? I see four interlinked reasons: First, the traditional model of management is so pervasive that it is still the safe way of doing things. So what does the future look like?

The Blue Economy The Blue Economy: 10 years - 100 innovations - 100 million jobs is a book by Gunter Pauli. The book expresses the ultimate aim that a Blue Economy business model will shift society from scarcity to abundance "with what we have", by tackling issues that cause environmental and related problems in new ways. The book highlights potential benefits in connecting and combining seemingly disparate environmental problems with open-source scientific solutions based upon physical processes common in the natural world, to create solutions that are both environmentally beneficial and which have financial and wider social benefits. The book suggests that we can alter the way in which we run our industrial processes and tackle resultant environmental problems, refocusing from the use of rare and high-energy cost resources to instead seek solutions based upon simpler and cleaner technologies. Background[edit] See also[edit] References[edit] External links[edit]

circular economy | On the New Economy circular economy,events,new services,tools,zero waste A volunteer repair team assembled in South East Portland to offer free repairs of small appliances, bikes, jewelry, and clothing. Repair PDX launched in May 2013 to “organize repair cafés – free events that bring volunteers who like to fix things together with people who have broken items that need fixing.” featured, free, Master Recycler, Portland Oregon, Repair Café, repairPDX.org, tool library Share or Die: Voices of the Get Lost Generation in the Age of Crisis America stands at a precipice; limitless consumption, reckless economics, and disregard for the environment have put the country on a collision course with disaster. It’s up to a younger generation to rebuild according to new forms of organization, and Share or Die: The Get Lost Generation in the Age of Crisis is a collection of messages from the front lines. From urban Detroit to central Amsterdam, and from worker co-operatives to nomadic communities, an astonishing variety of recent graduates and twenty-something experimenters are finding (and sharing) their own answers to negotiating the new economic order. Their visions of a shared future include: Collaborative consumption networks instead of private ownershipReplacing the corporate ladder with a “lattice lifestyle”Do-it-yourself higher educationWorker and housing cooperatives As a call-to-action, “share or die” doesn’t only refer to resource depletion, disappearing jobs, or stagnating wages. What people are saying about Share or Die:

Eliminative Materialism First published Thu May 8, 2003; substantive revision Tue Apr 16, 2013 Eliminative materialism (or eliminativism) is the radical claim that our ordinary, common-sense understanding of the mind is deeply wrong and that some or all of the mental states posited by common-sense do not actually exist. Descartes famously challenged much of what we take for granted, but he insisted that, for the most part, we can be confident about the content of our own minds. Eliminative materialists go further than Descartes on this point, since they challenge the existence of various mental states that Descartes took for granted. 1. In principle, anyone denying the existence of some type of thing is an eliminativist with regard to that type of thing. Nevertheless, contemporary eliminative materialism—the sort of eliminativism that denies the existence of specific types of mental states—is a relatively new theory with a very short history. 2. 2.1 Folk Psychology and the Theory-Theory 3.

Hasan Özbekhan Dr. Hasan Özbekhan (1921 – February 12, 2007) was a Turkish American systems scientist, cyberneticist, philosopher and planner who was Professor Emeritus of Management at the Wharton School of the University of Pennsylvania. He applied the field-of-systems theory to global problems, helped inspire the group of planners, diplomats, scientists and academics who came together as the Club of Rome.[1] Biography[edit] Hasan Özbekhan was born in Turkey in 1921, into a diplomatic family. In the 1960s Ozbekhan worked as management consultant to large multinational corporations. In 1970 he started working at the University of Pennsylvania at the faculty of the Wharton School, where he became Professor of Operations Research and Statistics, and Chairman of the Graduate Group in the Social Systems Sciences Department. He died on February 12, 2007 in Philadelphia. Work[edit] Together with Robert Jungk, Johan Galtung and many others he was member of MANKIND 2000. Publications[edit] References[edit]

The International Society for Ecological Economics | is.eco.eco thursdaydinners Intertemporal Selfishness It turns out that we have widely varying levels of psychological connectness to our future selves, and the ‘me’ of today is more likely to defer rewards to the future if there is a belief that the ‘me’ of a distant tomorrow will be very like today’s. Daniel Bartels and Oleg Urminsky explore this intertemporal selfishness, by setting contexts where experimental subjects are led to believe that their future selves will have changed drastically. In such cases, the subjects are much less likely to defer rewards, and more likely to consume them in the near term. Daniel Bartels and Oleg Urminsky, On Intertemporal Selfishness: The Perceived Instability of Identity Underlies Impatient ConsumptionWe will argue that our understanding of what constitutes a reasonable discount rate (or, more generally, prudent vs. impatient choices) has been limited by the implicit assumption that people should maximize the utility of a constant self over one’s lifetime. (via James Warren) related articles

Club of Rome The Club of Rome is a global think tank that deals with a variety of international political issues. Founded in 1968 at Accademia dei Lincei in Rome, Italy, the CoR describes itself as "a group of world citizens, sharing a common concern for the future of humanity." It consists of current and former heads of state, UN bureaucrats, high-level politicians and government officials, diplomats, scientists, economists and business leaders from around the globe.[1] It raised considerable public attention in 1972 with its report The Limits to Growth. The club states that its mission is "to act as a global catalyst for change through the identification and analysis of the crucial problems facing humanity and the communication of such problems to the most important public and private decision makers as well as to the general public."[2] Since 1 July 2008, the organization has its headquarters in Winterthur, Switzerland. Formation[edit] Organization[edit] National associations[edit] Worldviews[edit]

Cabin Porn UN releases blueprint for ‘green’ economic growth The United Nations Environment Programme (UNEP) today announced that it had drafted a blueprint for transitioning the world to a greener future while preserving – and potentially even accelerating – predicted economic growth. The UPEP report, Towards a Green Economy: Pathways to Sustainable Development and Poverty Eradication, called for investing $1.3 trillion a year (approximately 2 percent of yearly world GDP) into ten key sectors: agriculture, buildings, energy, fisheries, forestry, industry, tourism, transport, waste, and water. Governments already spend between 1-2 percent of subsidizing fossil fuels and unsustainable fisheries, the report notes. The UN believes that trillions of dollars in private capital will follow public investments. The report cited multiple examples of how “green” initiatives can effectively fight poverty in the developing world. There is mounting evidence that “green” initiatives can indeed propel economic growth, despite aggressive rhetoric to the contrary.