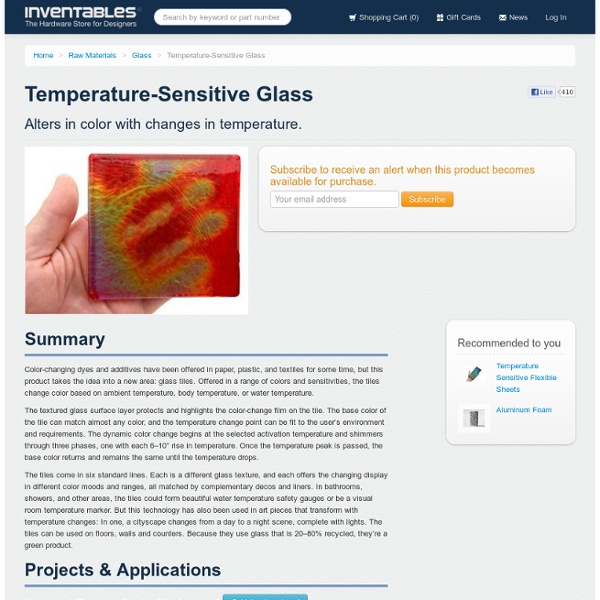 Product Details Color-changing dyes and additives have been offered in paper, plastic, and textiles for some time, but this product takes the idea into a new area: glass tiles. Offered in a range of colors and sensitivities, the tiles change color based on ambient temperature, body temperature, or water temperature. The textured glass surface layer protects and highlights the color-change film on the tile. The tiles come in six standard lines.

42 Utility Towel 10 Cool Beverage Drinking Gadgets Collection of useful drinking gadgets and creative inventions that promise to make our lives easier and more enjoyable. Bottle Top Bottle tops turn your can into a spill-proof bottle. Just snap onto the top and enjoy your favorite beverage without spills. Roll ‘n Pour Rocking beverage server helps you pour beverages from bulky and heavy bottles without spills or dropping the bottle. Liquor Lock Keep the “unwanted customers” from running your bar dry. Master Opener In addition to opening regular cans, this cool Master Opener can break vacuum seals, open pull tabs, twist off screw tops, and crack open soda and beer bottles. Draft Beer Faucet Traditional uses include draft beer systems like kegerators, however the creative folks at the Food Network prefer to use it to turn watermelons into cocktail kegs. Binocular Flask On the outside it appears to be a regular pair of binoculars, but is in fact a flask in sheep’s clothing. Bottle Clip U Fizz Tired of Coca-Cola and Pepsi? Aqua Jar Lemon Squeezer

Cardboard Gift Tags | Family Chic THURSDAY, FEBRUARY 3, 2011 | Comments: 17 The arrival of my husband's new bass amp has provided me with an enormous corrugated box to work with. I've been hooked on embroidery these days – so I couldn't resist using the cardboard to stitch up some gift tags for Valentine's Day. I cut out a piece of cardboard and pressed a cookie cutter into it to leave an impression that I could work from. You could also trace with a pencil – but I find this is an easier technique to use with kids and there are no pencil marks to erace. Using a blunt needle, pierce holes into your shape. Thread your needle with yarn and – using a back stitch – fill in your design. This is a great way to teach your kids some basic stitches.

Looxcie, a Camera Recording Everything You See Looxcie, a Camera Recording Everything You See Looxcie is a ~$200 camera you plug into your ear, which then records everything you see, following your field of vision. Several hours are recorded, with new stuff overwriting the old... and if you saw anything interesting, you click its button and have the last 30 seconds saved and shared on YouTube and other networks. To tune and manage the camera and see the clips you download an app onto an Android phone like Google Nexus. This looks like a very interesting tool (albeit with a name that could be easier to spell). Often when you get out a camera a) the thing you spotted is already over, or b) people suddenly take on an “official video camera” posture, completely changing what they just did (and babies may just grab for your camera and stop whatever they were doing). [Via Andy. >> More posts Advertisement This site unofficially covers Google™ and more with some rights reserved.

Stepping Thru Crazy: Men's Button-Up Refashion... into Ladies Tank! A few years ago, when the hubby and I lived in Florida (this was pre-kids, so make that 5-ish years...) I bought him a button-up shirt for his work. The deal was that he had to wear blue or white button-ups, so I thought, "Why not both at the same time?" And I got him this:Apparently when he wore it to work, his boss told him he looked like a picnic basket, aaand the shirt was retired to the closet. Well, I don't care if I look like a picnic basket, so I decided to turn it into a tank top for myself! It was actually really easy to do... let me try once again to tell you how I used a sewing machine... eh.... First things first, I chopped the sleeves off. Then I slipped the shirt on and pinned in the sides so that it fit. I took off the shirt, flipped it inside out and sewed up the sides where my pins were, trimmed off the excess, flipped it rightside out again, and tried it on to make sure it fit. Then I pinned the armholes the way I wanted them... carefully......and sewed them. That's it!

Fetish: Exoskeletal Glove Gives Motorcyclists an Iron Fist | Product Reviews Photo: Christian Stoll You can’t help it. It’s a reflex. You stick out your hand when you fall — it’s better to stop the descent with your palm than your face, right? That’s fine when you’re ambling down the street, but add an extra 80 mph and the weight of a motorcycle to the momentum equation and the bones in your paw might not take the strain very well. George Clooney Playboy Interview - July 2000 Celebrity Interview - George Clooney Playboy Magazine In 1962, future Pulitzer Prize–winning author Alex Haley sat down with jazz musician Miles Davis for what would become an institution of American journalism—the Playboy Interview. To celebrate the Interview’s 50th anniversary, Playboy has culled 50 of its most (in)famous Interviews and will publish them over the course of 50 weekdays (from September 4, 2012 to November 12, 2012) via Amazon’s Kindle Direct platform. Here, a glimpse at our conversation with actor and film director George Clooney from the July 2000 issue. “Filming Three Kings was a dangerous time. “If you look at rock stars who have survived over 20 or 30 years, they stayed thin and sort of sexual in a weird way. “I have several advantages over lots of people who get famous. To read the interview in its entirety on your Kindle App, Kindle Fire or Kindle Touch, click below. Or read the interview with access to all Playboy interviews on iPlayboy. read more: Celebrities, interview, playboy interview, actor

iTwin USB File Sharing Released in the U.S. | AllUSB Blog Each piece of the iTwin acts as the other’s better half and they just won’t work without each other. It sounds like the beginnings of a techie love story, but you may be the one more inclined to fall in love and add it to your wish list. The iTwin is a first generation device made by a company in Singapore that consists of two USB flash drives with no storage space on them, but limitless possibilities to share storage between two computers. It does the job of a cable without having to be anchored like a cable. To clarify, these USB sticks are no ordinary flash drives. As far as storage space goes, you’re only limited by the size of your own hard drive. There are a variety of daily applications for a USB device like the iTwin. The iTwin could also make for better project communication between coworkers or clients by eliminating the need for bulky email attachments that can crowd your inbox. The device takes USB technology down a unique avenue. Would you invest in an iTwin?

GPS Goggles with Head Mounted Display A coming together of sports lens developer Zeal Optics and display innovator Recon Instruments has managed to successfully squeeze both GPS technology and head-mounted display into a set of ski goggles named Transcend. A tiny computer gathers information from a number of on board sensors and provides location, speed, and altitude and temperature information to the wearer via a micro-LCD display inside the goggles. The image from the display is then virtually projected so that it appears out in front of the user.

Scientists discover dying corals, creatures near gulf oil spill site — Penn State University On a research ship in the Gulf of Mexico on Tuesday, Nov. 2, seven miles southwest of the site of the Deep Water Horizon oil spill, a team of scientists discovered a community of corals that includes many recently dead colonies and others that clearly are dying. "We discovered a community of coral that has been impacted fairly recently by something very toxic," said the chief scientist on the cruise, Charles Fisher, who is a professor of biology at Penn State and a member of the research team that selected the site for study. Fisher said the research team encountered a colony of the hard coral species Madrepora that appeared to be unhealthy on Nov. 2, at a depth of 1,400 meters. "Although some branches of the coral colony appeared normal, other branches clearly were covered in a brown material, apparently sloughing tissue, and were producing abundant mucous," Fisher said. However, "The compelling evidence that we collected constitutes a smoking gun," Fisher said.