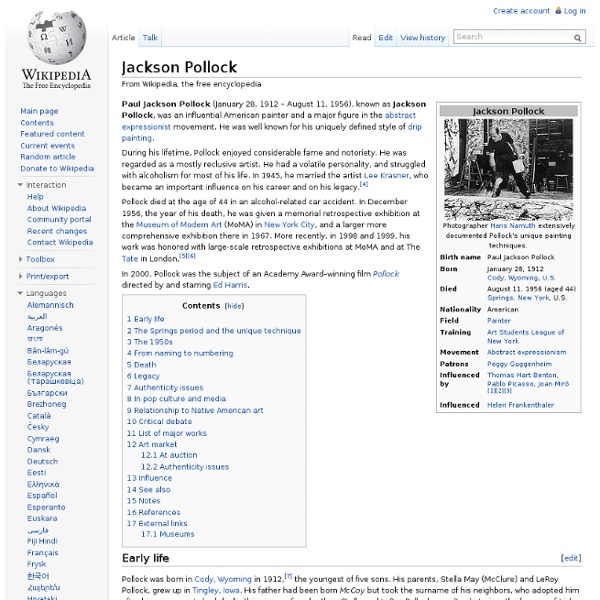 Paul Jackson Pollock (January 28, 1912 – August 11, 1956), known as Jackson Pollock, was an influential American painter and a major figure in the abstract expressionist movement. He was well known for his unique style of drip painting. During his lifetime, Pollock enjoyed considerable fame and notoriety, a major artist of his generation. Regarded as reclusive, he had a volatile personality, and struggled with alcoholism for most of his life. Pollock died at the age of 44 in an alcohol-related, single-car accident; he was driving. Early life[edit] Pollock was born in Cody, Wyoming, in 1912,[4] the youngest of five sons. While living in Echo Park, California, he enrolled at Los Angeles' Manual Arts High School,[6] from which he was expelled. Trying to deal with his established alcoholism, from 1938 through 1941 Pollock underwent Jungian psychotherapy with Dr. Springs period and his technique[edit] Pollock signed a gallery contract with Peggy Guggenheim in July 1943. New techniques[edit]