Room Lobby - the real online drawing chat with your friends! 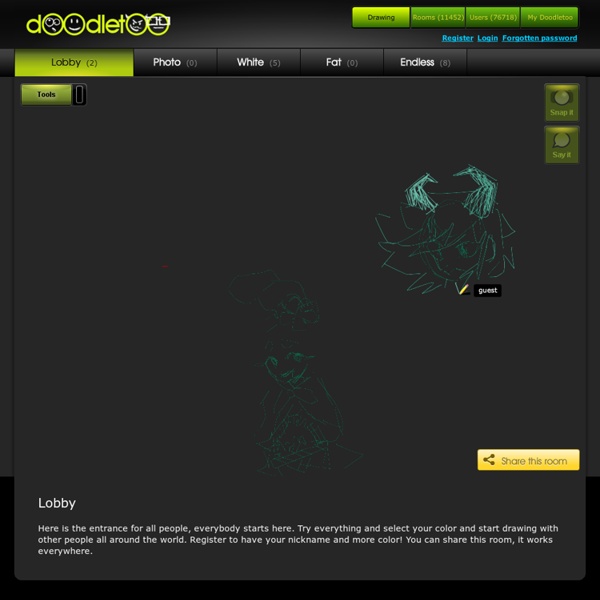 What is DoodleToo about? Doodletoo.com is an online drawing tool and chat room in one. Enter one of our rooms and draw your messages, ideas, moods, express yourself or post pictures to share with others! Everyone sees your pen and can join you, help you, challenge you or maybe become your friend. The whole world can now see your paintings as they are being created. It's a lot of fun – check for yourself! DoodleToo is the simplest chat ever :-). DoodleToo on my website Room Embed API DoodleToo on your website?

real media paint software Rebelle is a natural media paint program with focus on real watercolors and acrylics. I have worked on this technology more than two years to achieve the most realistic watercolor painting tools possible. The watercolor simulation is based on real world color mixing, blending, moistening and drying. You can paint, smear, wet already dried colors, blow them on the paper, tilt the paper to create water drops and get all these beautiful watercolor effects. The 6 Creepiest Places on Earth It doesn't matter whether or not you believe in ghosts, there are some places in which none of us would want to spend a night. These places have well earned their reputations as being so creepy, tragic or mysterious (or all three) that they definitely qualify as "haunted." Places like... Aokigahara is a woodland at the base of Mount Fuji in Japan that makes The Blair Witch Project forest look like Winnie the Pooh's Hundred Acre Wood.

drawball.com The memo that 'proves aliens landed at Roswell'... released online by the FBI By Daily Mail Reporter Updated: 07:37 GMT, 11 April 2011 A bizarre memo that appears to prove that aliens did land in New Mexico prior to 1950 has been published by the FBI. The bureau has made thousands of files available in a new online resource called The Vault. Among them is a memo to the director from Guy Hottel, the special agent in charge of the Washington field office in 1950. Proof of (alien) life? A copy of the 1950 memo that recounts the discovery of flying saucers and aliens in New Mexico. Pixuffle - Shuffle pixels to create unique compositions! How to Think of What to Draw Edit Article Edited by Dvortygirl, Laptop123, Nicole Willson, Random and 41 others Have you been inspired to draw, including getting inspiration from famous artists, or are just doing it for fun? Drawing can often be fun, but sometimes it can be hard to think of ideas for what to draw.

piq The 25 Largest Facebook Games As 2010 Begins - Flock The 25 Largest Facebook Games As 2010 Begins While 2009 was the year social games exploded into the mainstream consciousness, developers aren’t slowing down as 2010 begins. Instead, they’re only speeding up – hiring more coders and artists, spending more intelligently on customer acquisition, and in some cases, releasing new games every 4 weeks. Here’s a look at the top 25 Facebook games as we enter what will surely be the biggest year for social gaming yet, from Inside Social Games: Interestingly, December was a mixed end to the year, as traffic stayed level or fell for most of the biggest Facebook games during December, according to AppData. 10 of the top 25 games saw decreases from December 1, 2009 to January 1, 2010. Another 5 games saw gains of less than 1 million.

Free Online Graphic Design Software (dtp) and Photo Editor How to Create Secret Codes and Ciphers: 14 steps Edit Article Sample Coded ParagraphsCodesCiphersSecret Languages Edited by General Jackson, Sarah Eliza, Teresa, Maluniu and 77 others Flowpaint ScienceZine - CometBird One of the main quests of science throughout the ages has been to discover what matter is made of - and what holds it together. All matter is made out of many tiny particles called atoms . The study of how these atoms interact is called chemistry . Modern physics has discovered how atoms are made up of smaller particles and how these particles interact to build atoms into molecules and larger objects of matter. The philosopher Democritus came very close to our modern understanding when he proposed that everything is made up of very small particles, which he called atoms , from the Greek atomus , for 'indivisible'.

Penolo PARANORMAL VIDEO PAGE ONE - SOME OF OUR EVIDENCE AND VIDEOS FROM ACROSS THE NET - GHOST VIDEO MOVIES Copyright © 2011 SPOOKS - Scientific Paranormal Observation Of Kinetic Spirits - All Right Reserved Strange “Mirror Distortion” caught on camera. (Watch mirror for shadow that moves from left to right)

this is a cool site, many people working on the same page..but beware: the content is not monitored..many inappropriate drawings and words. Can't use it with my class, but still fun to play with by mburright Feb 27