The 7 Most Badass Acts of Vandalism Ever Photographed 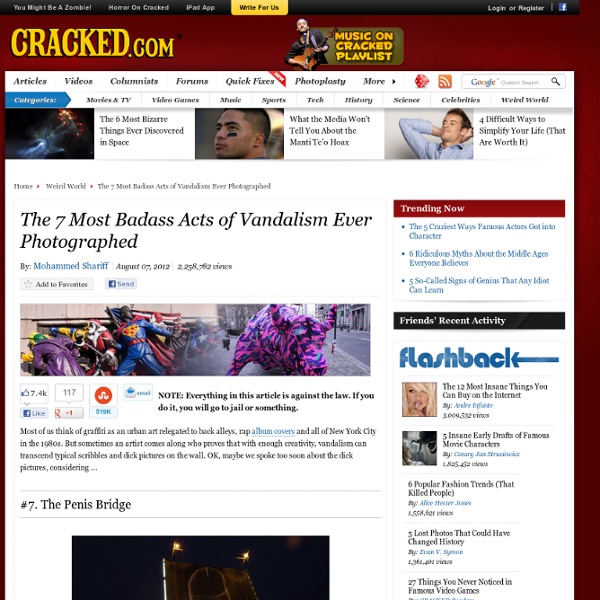 NOTE: Everything in this article is against the law. If you do it, you will go to jail or something. Most of us think of graffiti as an urban art relegated to back alleys, rap album covers and all of New York City in the 1980s. But sometimes an artist comes along who proves that with enough creativity, vandalism can transcend typical scribbles and dick pictures on the wall. OK, maybe we spoke too soon about the dick pictures, considering ... #7. Via Doobybrain.com As any novice vandal can tell you, the key to a good public penis drawing is execution, and nobody has executed a better one than the Russian art group Voina. In 2010, the group decided to paint a massive dick on a drawbridge in the middle of St. Via 24flinching.comWe would give anything in the world to find out that they didn't know that was back there during this shot. So picture this: You've got to cross the Neva River, but you don't make it to the Liteiny Bridge on time. So what was all the dick-painting about? #6. #5. #4.

Disney Same-Sex Series: Love Is The Answer L.E.M.U.R. Paranormal Investigations: Hampton Ghost The Ghost of Henry VIII on Video? In late December of 2003, security cameras at Hampton Court Palace, a huge tudor castle near London, captured a startling image. Security guards were unsettled to repeatedly find a fire door open when no one was apparently around. Vikki Wood, a spokesperson for the Palace, said "We're baffled too--it's not a joke, we haven't manufactured it. A security officer, James Faukes, called the incident "unnerving," and said they'd ruled out their costumed guides. Here, you can analyze the footage for yourself. Flash animation courtesy www.paranormal-investigation.com

17 Awesome Works Of Art In Unexpected Places 30 Examples of Funny Ads for Inspiration In many settings advertisements tend to be ignored or overlooked. When flipping through a magazine you probably skip past the ads unless something really catches your attention. The same thing applies when it comes to driving by billboards, browsing online, or interacting anywhere else where ads appear. One approach for ad designers to capture the attention and interest of viewers is to use humor. In this post we’ll showcase 30 examples of advertisements that user humor to make an impact on viewers. Looking for hosting?

Gaijinass “Just got home from Illinois, lock the front door, oh boy! Got to sit down, take a rest on the porch.” We turn onto a very narrow little road that cuts between two expansive rice fields and which has a dead meter drop on either side and the SUV accelerates somewhat precariously. He reaches over and with his left hand turns the volume up a bit. “Imagination sets in, pretty soon I’m singing,” This little road is really long and the fields are wide and stretch to far away. The interior of the truck is well worn and smells of old leather, pipe-smoke and licorice. “Doo, doo, doo, Looking out my back door.” It takes about an hour to reach the spot by the river he wants to fish at. He changes into his black waders behind the old SUV with it’s silver paint peeling in certain areas. We wade through thigh-high grass and ankle deep mud to reach a solid little spot right at the edge of the water. We wade into the water and it’s cold and pulls at my legs. The first catch of the day.

Anonymous Confessions As they say, what happens in Vegas stays in Vegas – but what if we could share with full discretion? Everyone of us has his own little secrets and ‘Confessions’, a public art project by american artist Candy Chang, invites people to anonymously share their confessions and see the confessions of people around them in the heart of the Las Vegas strip. Chang lived in Las Vegas for a month and turned her P3 Studio gallery into a contemplative place for people to share their confessions and being fascinated by the secrets others hide inside themselves. Inspired by Post Secret, Shinto shrine prayer walls, and Catholicism, people could write and submit their confessions on wooden plaques in the privacy of confession booths. All images © Candy Chang | Via: My Modern Met

Awesome Alice In Wonderland Themed Restaurant Awesome Alice In Wonderland Themed Restaurant If you Ever get a Chance to Visit Tokyo, don’t forget to visit Alice in Wonderland Themed Restaurant. Designed by Eiichi Maruyama and Katsunori Suzuki of FDW, toying with the fantasies of Alice in Wonderland, A restaurant that combines playful graphics with dramatic designs that are sure to indulge diners’ imaginations. Source: flickr.com/photos/mmmfruit Be Sociable, Share! The Bell Witch Web Site - Online home of the Bell Witch of Tennessee 21 Awesome Vintage Photos Of Celebrities Eating How Bill Nye Became The Science Guy. And A Ballet Shoe Inventor. And a Political Voice When Bill Nye tells a story about getting hit in the head, he stops to remind you about inertia, “a property of matter.” He’ll ask you how many electric switches are in your iPhone and casually chat about SpaceShipOne. It seems as though Nye were born to play the role for which he is best known: “the science guy,” an amusing, bow-tie-wearing teacher with an entertaining experiment to go with every scientific phenomena. But his career trajectory reads much more like a delicate string of happenstance than a born destiny. Looking a bit like Steve Martin started his career as a comic. Calling a DJ to correct his pronunciation of “gigawatts” got him a regular radio appearance, and a volunteer gig writing jokes led to his first TV appearance. But listen for a fair length of time to Nye talk about his string of happy accidents, and you'll realize he's wired for disruption--personal and otherwise. Nye has a knack for embracing chance opportunities. His reaction: “Bring it on, as we say." It was.

Pretty Photos Of Pretty Costumes In Pretty Snowfall In Japan Solar Toothbrush, No Water Or Toothpaste Required This toothbrush works through an ingenious, water and energy-saving, eco-friendly photochemical reaction. Canadian scientists have come up with something that uses solar energy to clean your teeth. The Soladey-J3X solar toothbrush works through an ingenious, water and energy-saving, eco-friendly photochemical reaction. Dr Kunio Komiyama , a University of Saskatchewan dentistry professor designed the first solar toothbrush about 15 years ago. The toothbrush has a solar panel at its base that transmits electrons through a lead wire in the top of the mechanism. No doubt this device will be popular with oversleeping students everywhere. Poor dental hygiene has been linked to a decline in overall health of individuals, as well as many systemic diseases. I don’t know yet who would pay for such a scheme, but it’s something to think about. digg

The Mind Blowing Photography Of Water Wigs The Moses Bridge is Invisible to The Eye A series of moats and fortresses were built over the West Brabant Water Line region of the Netherlands during the 17th century in order to provide protection from invasion by France and Spain. Fort de Roovere was surrounded with a shallow moat that was too deep to march across, and too shallow for boats. In turn the earthen fort had remained protected –until now. From afar, the Moses Bridge is invisible to the eye. First lying flush with the earth, the bridge then descends deeper into the ground. The bridge can’t be seen from a distance because the ground and the water come all the way up to its edge. According to the designers, virtually no water spills over the edge because the height of the water is controlled by two small adjustable ‘dams’ at both sides of the moat. The Moses Bridge was built in about 2 months in the middle of the moat waters by first dredging around the bridge site and then driving sheet piles into the ground. Ro&Ad-Architects Ad Kil & Ro Koster Via RO&AD Architecten