Rules Of A Gentleman 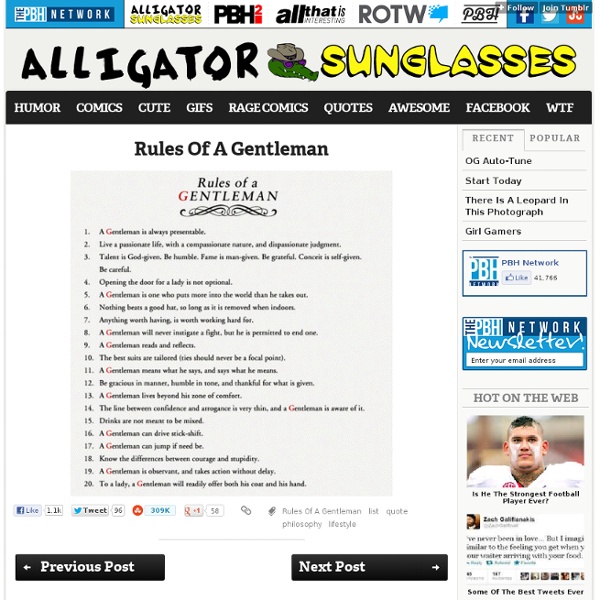 15 Current Technologies My Newborn Son Wont Use | LiveScience I was surprised when a 23-year-old co-worker told me she didn't remember a time before broadband Internet. At some point, her parents must have had dial-up, but she was so young that she doesn't even remember back that far. Wireless broadband won't dominate the home market until he's 8 to 10, but my son won't remember a world where consumers pay for wired Internet connections. Even today, 4G LTE provides comparable download speeds and better upload speeds than cable Internet, but the cost of using mobile broadband all the time is prohibitive. 25 Things You Should Know About Character Previous iterations of the “25 Things” series: 25 Things Every Writer Should Know 25 Things You Should Know About Storytelling And now… Here you’ll find the many things I believe — at this moment! 1. Without character, you have nothing. 2. A great character can be the line between narrative life and story death. 3. Don’t believe that all those other aspects are separate from the character. 4. The audience will do anything to spend time with a great character. 5. It is critical to know what a character wants from the start. 6. It doesn’t matter if we “like” your character, or in the parlance of junior high whether we even “like-like” your character. 7. It is critical to smack the audience in the crotchal region with an undeniable reason to give a fuck. 8. You must prove this thesis: “This character is worth the audience’s time.” 9. Don’t let the character be a dingleberry stuck to the ass of a toad as he floats downriver on a bumpy log. 10. 11. 12. 13. The law of threes. 15. 16. 17. 18.

www.jeffbullas.com/2012/01/09/will-google-replace-facebook-as-the-king-of-social-networks-plus-infographic/ Nothing is forever and the rise of Google plus begs the question “When will Facebook be dethroned? ” MySpace lasted 5 years as the king of social networks until 2007 after launching in 2002. We now know that that business decision ended in tears, with MySpace being sold in 2011 for less than $40 million, as its user base continued to decline. Facebook is not taking the private sale route but is going public this year with a market valuation estimated at $100 billion. Google had attempted in the past to create a social media network as it knew that social networks were the future. It launched Google “Buzz” and Google “Wave”, both of which were dismal failures. Stickiness is a term that is used to describe the amount of time users spend on a platform engaged and using its features and functions. Time Spent on Facebook The numbers from Nielsen regarding time spent on Facebook compared to Google and other web properties are worth considering and reveal why Google had to launch Google+. 469inShare

Top 10: Conversation Etiquette Mistakes | MintLife Blog | Personal Finance News & Advice photo: *clairity* We’re all capable of the occasional social blunder. Of course, some of us seem more prone to it than others, but even the savviest people aren’t impervious to such gaffes. And no scenario is richer with these potential faux pas than the everyday conversation, in which you can say the wrong thing, do the wrong thing, and occasionally spit on others when trying to pronounce nouns with German etymology. No worries. But just because these conversation etiquette mistakes happen across the board doesn’t mean they can’t be avoided. No.10 – Changing the topic to suit your own interests Everyone has their own conversation topics of choice — work, office gossip or early 20th century smelting techniques. No.9 – Checking your phone Technology has become a distraction for many and, of course, the phone is the worst offender. No.8 – Not knowing your audience Know your audience. No.7 – One-upmanship It’s not only a conversation etiquette mistake, it’s an alienating trait to exercise.

5 Facebook Timeline Brand Page User Insights and Tips for Marketers [Study] Brands on Facebook have some work to do in helping fans understand their message on the new Timeline brand pages. Users find some elements confusing, such as unexpanded apps and the “See More” breaks in content. Others, like cover images, may not be as important as you would think. A new eye tracking study by SimpleUsability, in which they play back activity to the user and have them recall their thought process, highlights a number of challenges and opportunities for brands using Facebook as a marketing channel. Each key insight is followed by a tip enclosed in quotes, which comes directly from SimpleUsability’s report. 1. Tip: “Page managers should consider how promotions, competitions and themed content can be contained within a specific timeframe that doesn’t require excessive scrolling.” It can be challenging, especially for smaller companies, to commit to posting new content on a regular basis. 2. Timeline cover images are tricky. The takeaway? 3. 4. 5.

Why I Decided, 11 Years Ago, to Live Without Money July 17, 2012 | Like this article? Join our email list: Stay up to date with the latest headlines via email. For more than 11 years I’ve lived without money, government assistance, or conscious barter. My decision to live without money was conceived on a backpacking trip to Alaska in 1998. I honed in on the berry section of the orchestra. The raspberry bush expected nothing in return and I took from it without a sense of debt. There in the woods I felt a therapeutic relief absent in commercial civilization. Thus began a hypothesis of why wild nature’s economy is balanced while the commercial economy is not and can never be. I saw then that commercial civilization can never succeed in coming into balance with the environment.