Has the Large Hadron Collider destroyed the world yet? 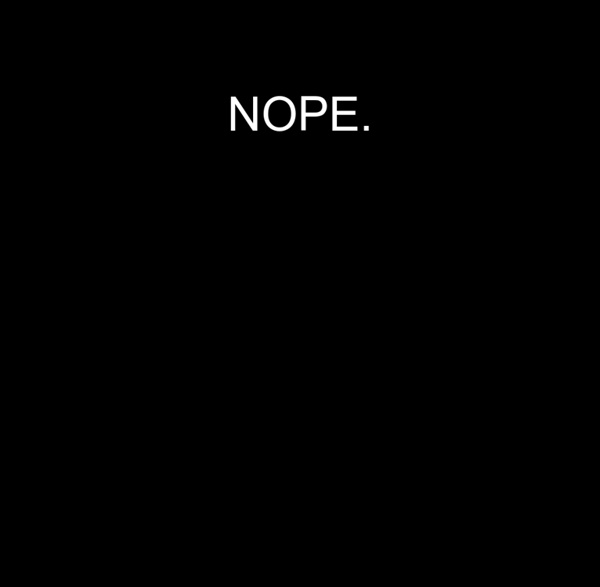 The Online Learning Blog from Study2U Supposedly browsing the internet requires more brain power than watching television. Although judging from some of the websites we’ve come across that assumption is cast into doubt. Here’s some of the sites we like that might get your brain to sit up and listen. Ted A conference that started in 1984 bringing together experts in technology, entertainment and design quickly grew into so much more. HEEEEEEEEEEEEEEY! MICHELLE OBAMA IS YOUR NEW BICYCLE Correlation vs. Causation (A Mathographic) As part of our quest to understand the Algorithm, we do a lot of correlation analysis here at SEOmoz. We tend to dive right into the deep end, so I thought it might be a good time to take a step back and talk about the absolute basics of correlation, including some warnings about causation. We’ll often say (and hear) the fallback phrase – “correlation does not imply causation”, but people rarely dig into what that means.

The Price is Right – Losing Horns Google Offers A Carrot/Stick For Marketers To Go Mobile Google is increasingly trying to send advertisers a message about how critical mobile is becoming. As an example the company recently estimated that a huge percentage of last-minute shopping search (44 percent) this holiday will be on smartphones and tablets. Despite predictions like this and recent survey data showing enterprises are pouring money into mobile marketing, the majority of brands and advertisers still don’t have an optimized mobile presence.

COMEX Preview: Some gadgets to look out for! Today marks the start of COMEX 2011, and like every COMEX show that preceded this year's, brands and manufacturers are trying to elbow each other out with deals, deals and more deals! We don't know the full extent of the promotions that will be present at COMEX yet, but here is a short list of gadgets that you must check out if you count yourself an aficionado. Of course, we'll be on site tomorrow to sniff out the best deals, so keep your eye on Tech Talk! Xbox 360 trade-in offer Got an old console that you're just looking for an excuse to get rid of?

8 Breakthrough Innovations in Tech For the Tech Innovators Series, supported by Lenovo, Mashable uncovered eight groundbreaking innovations that are changing the landscape of business. From Google to Powermat, businesses large and small are embracing these innovations to rise head and shoulders above the competition. These companies have recognized areas in their own industries that can be improved with tech, and are reaping the benefits of their own bold thinking.

A first look inside Google's futuristic quantum lab In May, Google launched the Quantum Artificial Intelligence Lab with hardware from the Canadian quantum computing company D-Wave and technical expertise from NASA. It was an ambitious open research project aimed at exploring both the capabilities of quantum computer architecture and the mysteries of space exploration — but in the months since, they've stayed quiet about exactly what kind of work they've been doing there. Operated at near-absolute-zero temperatures Tomorrow, they're breaking the silence with a brief short film, set to debut at the Imagine Science Films Festival at Google New York.