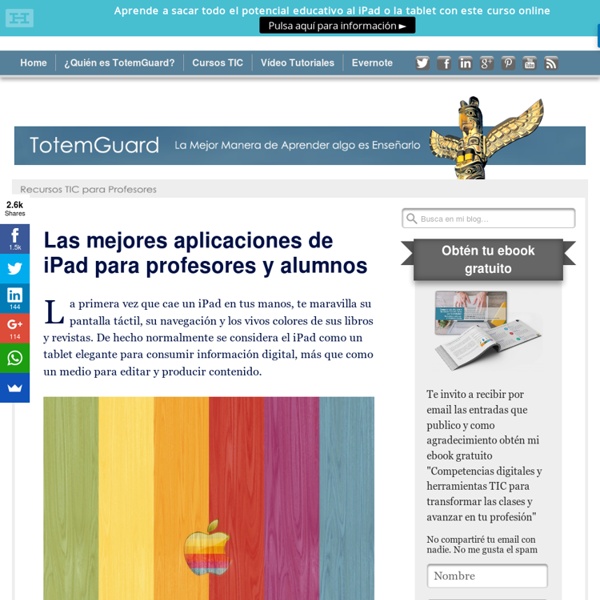 How To Capture Ideas Visually With The iPad By its very design, the iPad promotes consumption. Essentially an interactive mobile screen, the combination of physical form and supporting software-based user interface on Apple’s wunder-tablet suggests watching and listening, enabling you to tear the “monitor” off the desk and take it with you. By lacking a keyboard, input and production aren’t quite as natural. That isn’t necessarily because the iPad can’t accommodate such input, but rather that the software–and our habits as users–haven’t completely caught up with the not-insignificant shift in interface. App Center Google Drive is one safe place for all your stuff. Gain instant access to your photos, videos, documents, and other files that are important to you, d... Resource App This app can only be installed to your Resources area GoAnimate for Schools is widely used for lesson content, teacher and student presentations, tutorials, language training, behavioral training (anti-bu... Starting at $99.00

Want to Build a New App? There's an App for That, Too Competition in Apple’s App Store is so tough that even strong concepts must be planned to perfection before any development should start. So enter App Cooker: A hot new iPad app that makes sure other apps have the right ingredients in place before any development begins. App Cooker ($19.99) from Sophia-Antipolis, France-based Hot Apps Factory helps aspiring designers organize, plan and get app projects ready for production. 30-year-old Xavier Veyrat — the designer of App Cooker — spoke to Mashable about the development of the platform and the steps that go into creating a masterpiece app recipe. Don’t let Cloud Education get Hijacked! « The Digital Frontline One of my favourite aspects of the NFL is that it can serve as an analogy for almost anything. Seemingly each year, some great coach comes up with an innovative new system or scheme – the West Coast offense, the zone blitz, the Wildcat offense or the new 3-3-5 defense. As soon as a team achieves success with a certain style of play, everyone jumps on board. The NFL is the ultimate “copycat” league. The new trend of adoption of Ed Teach is perfectly analogous to this copycat mentality. One of my concerns is that the for-profit companies are jumping on board the “Ed Tech Train” with great zeal.

Socratic Questioning Techniques > Questioning > Socratic Questions Conceptual | Assumptions | Rationale | Viewpoint | Implications | Question | See also Socrates was one of the greatest educators who taught by asking questions and thus drawing out answers from his pupils ('ex duco', means to 'lead out', which is the root of 'education'). Sadly, he martyred himself by drinking hemlock rather than compromise his principles. 12 Crucial Questions to Ask before Using iPad with your Students iPad is making huge inroads into education and it is believed to have revolutionized the whole concept of mobile learning. More and more schools are, if not already adopting 1:1 environments or BYOD projects , then they are at least debating a future inclusion of this mobile device in the classroom. But as a teacher and practitioner who is going to be using iPad with his/her students, you need to think about the instructional use of this tool. There are several questions you need to foment in your mind and hopefully find answers to before using iPad in your teaching.

Back to School App-pack The image above was created using PhotoshopTouch on an iPad and was then uploaded to Thinglink to create the hotspots. The summer is quickly winding down & a number of teachers will be returning to their classroom with new mobile devices (iPads). 39 Sites For Using iPads in the Classroom Pages - Menu This Blog Linked From Here Sites to Follow Friday, October 7, 2011 39 Sites For Using iPads in the Classroom Connect with the Moodle community on #Googleplus  Welcome to Moodlenews.com A resource site for all Moodle-related news, tutorials, video, course content information and original resources. If you're new here, you may want to subscribe: RSS feed| Weekly Email Newsletter | Moodle News Twitter Thanks for visiting! If you’re looking for more ways to connect with Moodlers you can check out and join a moderated Moodle community (moderators include Helen Foster and Martin Dougiamas) on Google+ that was recently created.

Cooperative Learning Definition Cooperative learning consists of instructional techniques that require positive interdependence between learners in order for learning to occur. Basic Elements Research shows that both competitive and cooperative interaction are a healthy part of a child’s repertoire of behavior. By second grade, however, urban children have effectively extinguished their cooperative behavior and persist in competition, even when it’s counterproductive.

iPad in schools 102 iPad Published on November 17th, 2012 | by Mark Anderson I’m being asked over and over again at the moment about iPads and how they can be used in education. Here are some of the questions I’ve been asked lately. “My Head has given me 30 iPads and an Apple TV, what do I do?” The 20+ Apps To Know About In 2013 Education got a lot more mobile in 2012 as in-school iPad initiatives , the iPhone 5 launch and online learning providers in general made classroom experiences more interesting—and don’t expect to see teaching head back to desktop PC’s in 2013. In fact, as MOOCs and hybrid programs continue to evolve, mobile should have an ever more significant role to play. Looking back at some of 2012′s most significant app launches and updates, Education Dive assembled a list of a few of the best apps on iOS and Android devices that we think educators should know about for 2013. Some of these are already out in the wild, and some are still twinkles in their developers’ eyes. All of 23 of them stand to be important, however, in the new year:

100 Ways to Use Your iPod to Learn and Study Better If you don’t have an iPad or an iPhone, no sweat! You can use your iPod for more than just listening to music. Educational apps available in the iTunes store can help you study and take notes like a pro! Students of all ages are taking advantage of the educational benefits of the iPod.