The Quest to Gamify Education - One goal: To increase student engagement by incorporating game mechanics within the classroom. 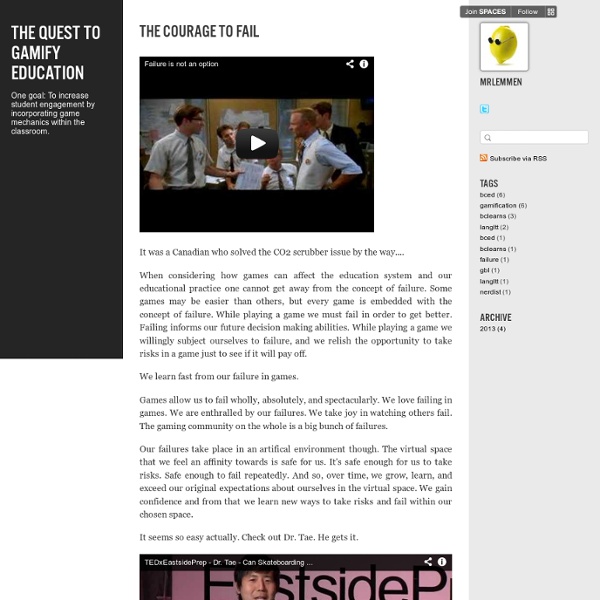 25 TED Talks Perfect For Classrooms The 50 Best Sources of Free STEM Education Online 12.05K Views 0 Likes Colleges, universities, and other educational forums in your community can be excellent places to learn more about a variety of STEM topics, but there is also a wealth of educational material available on the web for those who prefer to learn at their own pace or take a more individual approach. Games « you found me. I make alternate reality games: games that are designed to improve real lives or solve real problems. I’ve been making ARGs since 2001 — and you can watch trailers for a dozen of my favorite ARGs below. Many of my games challenge players to tackle real-world problems at a planetary-scale: hunger, poverty, climate change, or global peace, for example (see: EVOKE, World Without Oil, Superstruct). The biggest influence on my game design is the science of positive psychology. the full range of positive emotions and engagement,stronger social connections and relationships,more resilience in the face of challenges and obstacles,more ambitious and surprising accomplishmentsand service to something bigger than ourselves? Most of the games I make aren’t like typical videogames that you can play whenever you want. SUPERBETTER (2012 ) The game that builds your real-life resilience. My role: Inventor and chief creative officer for SuperBetter Labs. My role: Creative director. So how did it work?

Top 10 Fixes for the Web's Most Annoying Problems @timgray: Not if you're in marketing. The world needs more people like you :) I spend a lot of time trying to explain the benefits of a simple design: - easier site maintenance - focuses more on goal of site, rather than "ooo, shiny..." - faster loading time - more browser support - no worry of flash or JS blockers interfering with functionality Usually, it's not the fault of individual web designers, it's the entire industry business model. An agency that sells the client the simplest (and usually best) site is only moderately successful. An agency that sells the client the crazy bells-and-whistles flash/ajax broadband-only monstrosity with full social media integration for two hundred grand can afford to employ more expert buzzwording bullshitting marketeers and grow like crazy. Designers like simplicity, ease of use, elegance.

10 Ideas in Pursuit of a Global Curriculum This book is published through TeachThought by Terry Heick as part of the Innovate Learning series. Background Now over a decade into the 21 st century, there is tremendous pressure for education to “globalize.” In major world markets, the business world globalized decades ago, expanding beyond domestic markets in pursuit of more diverse audiences and stronger profits. This is made all the more strange by the relationship between education and economic systems. The Book In just under 20 pages, educator Terry Heick will help you get started down the path of “globalization,” offering strategies that can be immediately implemented in any K-12 classroom tomorrow. 10 Ideas, 30 Strategies, 1 Important Conversation. The book can be found here , or via the embedded Amazon link below.

GDC: Hecker's Nightmare Scenario - A Future Of Rewarding Players For Dull Tasks It's possible that an over-reliance on metrics-driven design and extrinsic rewards for in-game actions could lead to a future of "designing shitty games that you have to pay people to play," warns independent developer Chris Hecker. Hecker, who is currently working on the espionage-themed multiplayer game SpyParty, presented his hypothetical "nightmare self-fulfilling scenario" as part of a talk inquisitively titled "Achievements Considered Harmful?" during Game Developers Conference in San Francisco. Hecker based his talk on a large volume of often-conflicting psychological studies about the effects of intrinsic and extrinsic rewards, but he was quick to preface his hypothesis by noting that "there are no direct studies" about the topic as it specifically relates to video games, and he called for more research into the effects of reward structures in design. "You want to make an intrinsically interesting game," he said of game designers at large.

Game Theory .net - Resources for Learning and Teaching Strategy for Business and Life Learn to Program, by Chris Pine A Place to Start for the Future Programmer I guess this all began back in 2002. I was thinking about teaching programming, and what a great language Ruby would be for learning how to program. Unfortunately, there wasn't much Ruby documentation geared for newbies at the time. And it wasn't very good. What saved me was that I made it really easy for people to contact me, and I always tried to help people when they got stuck. A couple of years later, it was getting pretty good. :-) So good, in fact, that I was ready to pronounce it finished, and move on to something else. It took me another year, but now I think it's really good, mostly because of the hundreds of brave souls who have helped me write it. What's here on this site is the original tutorial, more or less unchanged since 2004. Thoughts For Teachers There were a few guiding principles that I tried to stick to. Another principle I've kept in mind is to teach only one way to do something. About the Original Tutorial Acknowledgements

Considering Using Technology In Education? Read This First. Back in February, a local Swedish newspaper reported that the Stockholm suburb of Sollentuna planned to transition entirely away from textbooks to tablet PCs by 2013. In a familiar argument, Sollentuna ed leaders argued that their schools should embrace technology–that they were in, in fact, in the ‘backwater’ compared to others. Insecurity The evolution of anything depends on (sometimes unequal parts) emotion and logic. For many professionals, there is a constant insecurity that someone somewhere is doing it better–faster, smarter, for less money, with better results. The trouble is that the data for these “other people” that are undoubtedly “doing it better” is usually scant: a compelling video, a bar graph reflecting test scores, a carefully-crafted blog post explaining their success in detail. That this kind of insecurity is universal should be comforting, but unfortunately it’s not. “We know that not every student has computer access at home. Adoption

Syllabus « Gaming the Classroom Indiana University, Bloomington Department of Telecommunications T366: Multiplayer Game Design Section 13353 Spring 2010 Email: clsheldo@indiana.edu Description Focus is on massively-multiplayer online games and virtual worlds. Class time will be divided between fighting monsters (Quizzes, Exams etc.), completing quests (Presentations of Games, Research etc.) and crafting (Personal Game Premises, Game Analysis Papers, Video Game Concept Document etc.). At the beginning of the semester everyone in the class will choose and name their avatars. Grading Procedure You will begin on the first day of class as a Level One avatar. *Your level will be determined by experience points (XP) on a 2000 XP scale. · Solo: Craft your own game proposal. 1. Grading is rigorous. Attendance and Conduct You are expected to attend every class. Plagiarism, submitting assignments written by others, and other forms of academic misconduct are governed by university policy. Required TextDesigning Virtual Worlds.

The Book Surgeon (15 pieces) Using knives, tweezers and surgical tools, Brian Dettmer carves one page at a time. Nothing inside the out-of-date encyclopedias, medical journals, illustration books, or dictionaries is relocated or implanted, only removed. Dettmer manipulates the pages and spines to form the shape of his sculptures. He also folds, bends, rolls, and stacks multiple books to create completely original sculptural forms. "My work is a collaboration with the existing material and its past creators and the completed pieces expose new relationships of the book’s internal elements exactly where they have been since their original conception," he says. "The richness and depth of the book is universally respected yet often undiscovered as the monopoly of the form and relevance of the information fades over time. Dettmer is originally from Chicago, where he studied at Columbia College. Update: Read our exclusive interview with the Book Surgeon here. Brian Dettmer's website

200 Free Outstanding Online Classes Take classes online from Yale, MIT, Tufts and other respected institutions for free. UPDATE: Some of the schools have moved the pages for some of the courses, and the OEDb hasn't updated them on their site yet. I checked every link listed. Some have moved and provide a link to the new page. Some have error messages. Some of the links (all at Utah State University) wanted a name and a password. The Online Education Database has put together 200 online classes from these and other institutions. Topics cover a very wide range - everything from Natural Science to Law and Politics. The Visual Arts seem to be missing. The Beginning Online Learning page has some wonderful articles and resources. The site is geared towards helping people find financial aid for college and is a bit on the commercial side in places. 200 Free, Quality Online Classes University Open Course Home Pages: Signing off, Rhiannon Click here for more items like this.