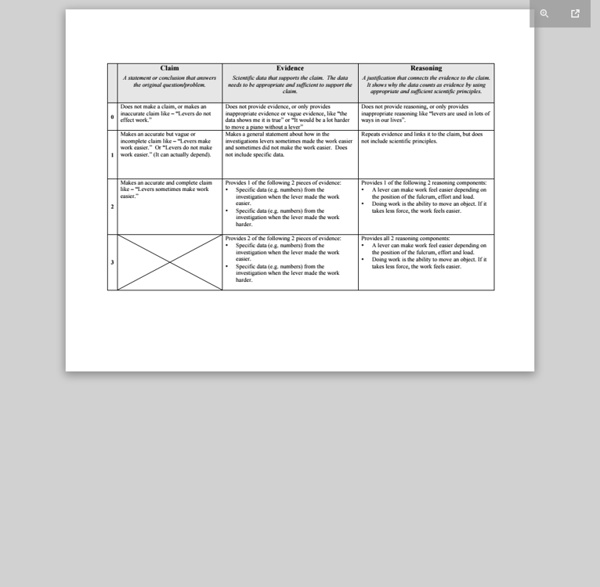 Scientific Writing Scaffolds As a department we've been working on different writing scaffolds. We use Constructing Meaning as a school which I think is mostly good. We've tried all kinds of different writing frames with varying degrees of success. Most of these come from Constructing Meaning. I'm going to take you in chronological order. This was one of our first attempts. It was our sixth graders' first or second try at extended science writing. We pulled two main lessons from this. 1. 2. Next attempts: This is just the first page but the back is similar. Below is an even more generalized example. We go back and forth about word banks. Most recently we gave all of our sixth graders a prompt from the textbook about whether or not the government should provide flood insurance. On my end, all they got was a graphic organizer. I put the claim at the bottom because I wanted them to go through each argument first before deciding on a claim. I was very happy with the results here.

Designing Science Inquiry: Claim + Evidence + Reasoning = Explanation In an interview with students, MIT's Kerry Emmanuel stated, "At the end of the day, it's just raw curiosity. I think almost everybody that gets seriously into science is driven by curiosity." Curiosity -- the desire to explain how the world works -- drives the questions we ask and the investigations we conduct. Let's say that we are planning a unit on matter. By having students observe solids and liquids, we have helped them define matter as something that has mass (or weight -- don’t worry about the difference with elementary kids!) Is air matter? Next, we can ask our students what data they need to answer the question, and how they can collect that data -- how they can investigate. According to the CER model, an explanation consists of: A claim that answers the question Evidence from students' data Reasoning that involves a "rule" or scientific principle that describes why the evidence supports the claim Your students might suggest the following explanation: Air is matter (claim).

Explanations: C.E.R. Prezi Claim Evidence Reasoning By far, the biggest shift in my teaching from year 1 to year 7 has been how much emphasis I now place on evaluating evidence and making evidence-based claims. I blame inquiry. Not inquiry in the generalized, overloaded, science teaching approach sense. Even now, when I hear the word "inquiry" I still think mainly of asking questions and designing experiments. We were very busy and very engaged and learned very little. There are a few structures I've been using to help shift the focus on the class to analysis and argument. Claim-Evidence-Reasoning (pdf and pdf) is a framework for writing scientific explanations. As part of their lab handout they get a prompt that looks like this: As the year goes on I remove most of the scaffolds until ultimately the students just get a prompt or question. I've been happy with it. I like frameworks a lot. The key to implementation is that the structure of the class really has to be designed around C-E-R. I also give my students a whiteboard format now.

Best Teacher I Ever Had Best Teacher I Ever Had by David Owen Extracted from Reader's Digest (Asian Edition), April 1991, pp. 47-48. Mr. Whitson taught sixth-grade science. When he returned my paper, I was shocked. Very simple, Mr. Needless to say, we were outraged. We should have figured it out, Mr. Mr. Every class was an adventure with Mr. We carried our brand-new skepticism into all our classes. If I'm ever asked to propose a solution to the problems in our schools, it will be Mr. Not everyone sees the value in this. The 27 Characteristics Of Highly Effective Teachers There are a few things in this world that will help you be an effective teacher. There’s hard work, loving what you do, and an attention to detail. Those are just the broad strokes, though. In fact, there are many sub-categories that you should know about. These fabulous tips are brief but powerful bits of wisdom from An Ethical Island. These ideas are broad and simple but useful. Second, the idea of ‘Contact’ is critical as it serves as a reminder to always be mindful about staying in touch with the family of your students.