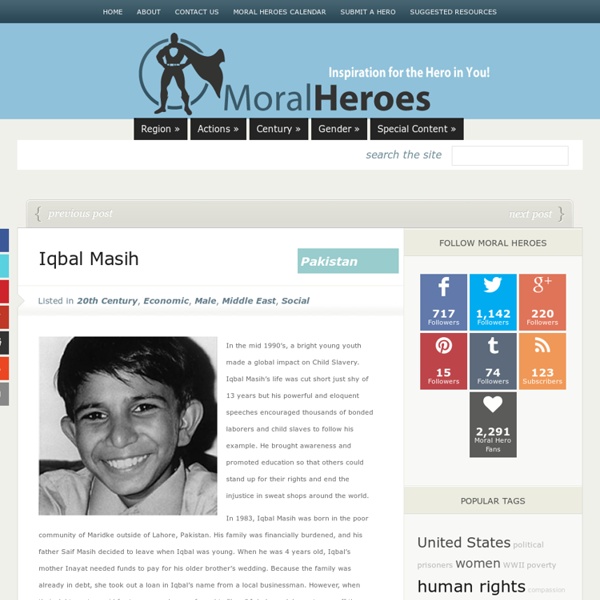 In the mid 1990’s, a bright young youth made a global impact on Child Slavery. Iqbal Masih’s life was cut short just shy of 13 years but his powerful and eloquent speeches encouraged thousands of bonded laborers and child slaves to follow his example. He brought awareness and promoted education so that others could stand up for their rights and end the injustice in sweat shops around the world. In 1983, Iqbal Masih was born in the poor community of Maridke outside of Lahore, Pakistan. Iqbal became one of the many child bonded laborers at the carpet factory. “Children should have pens in their hands not tools” – Iqbal Masih When Iqbal was 10 years old he made up his mind to escape. At the age of 12, Iqbal found away to attend a freedom day celebration held by the Brick Layer Unions. The 12 year old Iqbal became a prominent leader of the anti-slave movement in Pakistan. The BLLF sent him to speak at businesses and demonstrations all over Pakistan where bonded slavery was known to exist.

A Bullet Can't Kill a Dream - Who Was Iqbal? Who Was Iqbal Masih? (click on pictures to see full size jpg) Iqbal Masih was four years old when his father sold him into slavery. He was forced to work more than twelve hours a day. He was constantly beaten, verbally abused, and chained to his loom by the carpet factory owner. On December 2, 1994, when Iqbal visited the Broad Meadows Middle School, he looked much younger than his twelve years: his growth had been stunted by severe malnutrition and years of cramped immobility in front of a loom. There are an estimated 20 million bonded laborers in Pakistan today; at least 7.5 million of these bonded laborers are children. In 1992 Iqbal's life changed dramatically. Iqbal was an articulate, confident, and powerful speaker and an uncompromising critic of child servitude.

A day in the life of Her Majesty We’re all familiar with the Queen’s public persona – but how much do we know about what she gets up to behind closed doors? She’s extremely disciplined and dedicates swathes of her day to keeping up with current affairs. A creature of habit, she knows exactly what she likes when. But there’s also a naughty, indulgent side – she has biscuits before breakfast and feeds her beloved corgis titbits from the table. We take a little look... Rise and shine, Your Majesty! 7.30am The Queen starts her day bright and early, with a pot of freshly brewed Earl Grey tea (milk, no sugar), poured from silver pots into a bone china cup and a few biscuits before her breakfast. 8.30am Breakfast with the Duke of Edinburgh is served by a tail-coated footman in the Queen’s private first-floor dining room, which overlooks the beautiful Palace garden. 9am Time for work While many women her age are happily enjoying retirement, the Queen has plenty to keep her busy at her Chippendale desk in her sitting room. 5pm 7.30pm

British humour From Wikipedia, the free encyclopedia (Redirected from Humor in the Isle of Man) Themes Some themes (with examples) that underpinned late twentieth-century British humour were: Smut and innuendo Smut and innuendo with sexual and scatological themes, typified by: Disrespect to members of the establishment Disrespect to members of the establishment and authority, typified by: The absurd Green Wing (2004-2007), a sitcom set in a hospital, but featuring nothing medical. The absurd and the surreal, typified by: The Macabre Black humour, in which topics and events that are usually treated seriously are treated in a humorous or satirical manner, typified by: The manic The humour inherent in everyday life The humour, not necessarily apparent to the participants, inherent in everyday life, as seen in: The 'war' between parents/teachers and children The 'war' between parents/teachers and their children, typified by: The British class system Jeeves and Wooster, books by P. The lovable rogue Making fun of foreigners

Effects Global climate change has already had observable effects on the environment. Glaciers have shrunk, ice on rivers and lakes is breaking up earlier, plant and animal ranges have shifted and trees are flowering sooner. Effects that scientists had predicted in the past would result from global climate change are now occurring: loss of sea ice, accelerated sea level rise and longer, more intense heat waves. Taken as a whole, the range of published evidence indicates that the net damage costs of climate change are likely to be significant and to increase over time. Scientists have high confidence that global temperatures will continue to rise for decades to come, largely due to greenhouse gases produced by human activities. According to the IPCC, the extent of climate change effects on individual regions will vary over time and with the ability of different societal and environmental systems to mitigate or adapt to change. Future effects Change will continue through this century and beyond

New Zealand General facts Quizzes Videos Images Maori Tattoos Famous New Zealanders Peter Jackson (B1_B2) Edmund Hillary (B1-B2) Chief Hone Heke (A2-B1) Katherine Mansfield The Whale Rider Historical websites / Resources for teachers ARKive - Discover the world's most endangered species Wildscreen's Arkive project was launched in 2003 and grew to become the world's biggest encyclopaedia of life on Earth. With the help of over 7,000 of the world’s best wildlife filmmakers and photographers, conservationists and scientists, Arkive.org featured multi-media fact-files for more than 16,000 endangered species. Freely accessible to everyone, over half a million people every month, from over 200 countries, used Arkive to learn and discover the wonders of the natural world. Since 2013 Wildscreen was unable to raise sufficient funds from trusts, foundations, corporates and individual donors to support the year-round costs of keeping Arkive online. As a small conservation charity, Wildscreen eventually reached the point where it could no longer financially sustain the ongoing costs of keeping Arkive free and online or invest in its much needed development. Therefore, a very hard decision was made to take the www.arkive.org website offline in February 2019.