Your insight into science 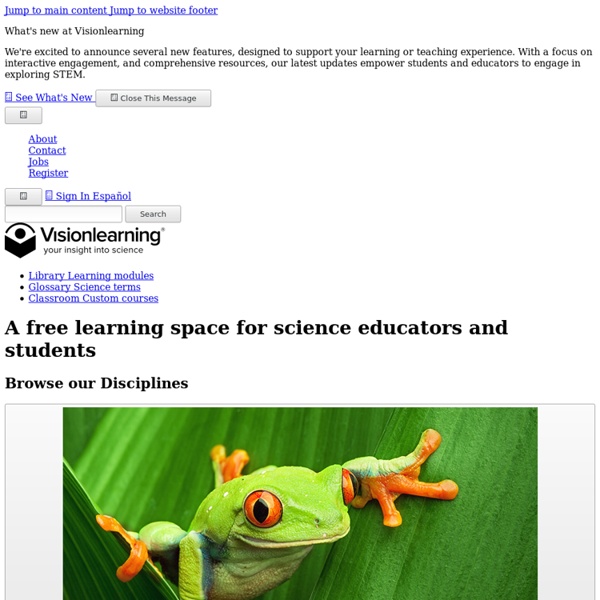 An Epochal Discovery: A Habitable Planet Orbits Our Neighboring Star One hundred and one years ago this October, a Scottish astronomer named Robert Innes pointed a camera at a grouping of stars near the Southern Cross, the defining feature of the night skies above his adopted Johannesburg. He was looking for a small companion to Alpha Centauri, our closest neighboring star system. Hunched over glass photographic plates, Innes teased out a signal. Across five years of images, a small, faint star moved, wiggling on the sky. It shifted just as much as Alpha Centauri, suggesting its fate was intertwined with that binary system.

Search Engines:Free of Charge/Education From Topical Search Wiki K12 Education Main Page Search Engines:Free of Charge/Education/K-12 Higher Education Top 20 Greatest Inventions of All Time Technology is a core component of the human experience. We have been creating tools to help us tame the physical world since the early days of our species. Any attempt to count down the most important technological inventions is certainly debatable, but here are some major advancements that should probably be on any such list (in chronological order): 1. FIRE - it can be argued that fire was discovered rather than invented. Certainly, early humans observed incidents of fire, but it wasn’t until they figured out how to control it and produce it themselves that humans could really make use of everything this new tool had to offer.

Your Favorite Housewares Are Spewing Poison Dust Inside Your Home People buy the nicest homes they can afford. They spend years—sometimes decades—pouring money into nest-feathering by stocking up on creature comforts. It’s no wonder we spend 90 percent of our lives indoors. 12 Dozen Places To Educate Yourself Online For Free All education is self-education. Period. It doesn’t matter if you’re sitting in a college classroom or a coffee shop. We don’t learn anything we don’t want to learn. How Does the Internet Work? - A Simple Explanation of the Internet You’re on vacation in Italy, sitting at a nice café (with free Wi-Fi). It’s a few days into your trip now and you’ve taken some beautiful photos that you want to share with your parents back home. Mom and Dad aren’t too familiar with Dropbox or Google Drive, so instead, you attach the photos to an email. Your mouse hovers over the send button and click…almost instantaneously it shows up in your Mom and Dad’s inboxes halfway across the world.

Pacific Islanders appear to be carrying the DNA of an unknown human species Hints of an unidentified, extinct human species have been found in the DNA of modern Melanesians - those living in a region of the South Pacific, northeast of Australia. According to new genetic modelling, the species is unlikely to be Neanderthal or Denisovan - two ancient species that are represented in the fossil record - but could represent a third, unknown human relative that has so far eluded archaeologists. "We’re missing a population, or we’re misunderstanding something about the relationships," Ryan Bohlender, a statistical geneticist from the University of Texas, told Tina Hesman Saey at Science News.

25 Best Sites for Free Educational Videos RefSeek's guide to the 25 best online resources for finding free educational videos. With the exception of BrainPOP and Cosmeo, all listed sites offer their extensive video libraries for free and without registration. Academic Earth Thousands of video lectures from the world's top scholars. academicearth.org How Does WiFi Work? - 8 Things You Didn’t Know About Wifi Ah, good ‘ole WiFi. From helping us to keep our phone bill low (except March, goddammit) to allowing our laptops/tablets/etc. to connect to the internet, WiFi has been a ubiquitous companion that we’ve all come to know and love. WiFi is also useful for some IoT applications (wait, what is IoT?), such as building and home automation or in-house energy management.

Ross Sea Designated as World’s Largest Marine Protected Area Today’s closing of the Commission for the Conservation of Antarctic Marine Living Resources (CCAMLR) meeting made history by declaring the largest marine protected area on the planet in Antarctica’s Ross Sea. This marks the first time that CCAMLR’s 24 member countries and the European Union reached consensus to protect this huge area of the Southern Ocean after similar proposals were blocked for the past five years. The 1.55 million square kilometer marine protected area will provide critical habitat, including breeding and foraging grounds, for a multitude of penguins, seals, krill, whales, and other species. It will also implement crucial policies needed to guide human activities such as fishing, shipping, and tourism, safeguarding this region, one of the last pristine oceans left on Earth. This would not have been possible without Russia joining with other countries to pass the proposal.

Open Educational Resources (OER): Resource Roundup Resources by Topic: OER, a part of the global open content movement, are shared teaching, learning, and research resources available under legally recognized open licenses -- free for people to reuse, revise, remix, and redistribute. Why are OER important? High-quality OER can save teachers significant time and effort on resource development and advance student learning inside and outside the classroom. The Ongoing Battle Between Science Teachers And Fake News : NPR Ed Every year Patrick Engleman plays a little trick on his students. The high school chemistry teacher introduces his ninth-graders in suburban Philadelphia to an insidious substance called dihydrogen monoxide. It's "involved in 80 percent of fatal car crashes. It's in every single cancer cell. This stuff, it'll burn you," he tells them.