From Darkness Emerges Ch 2, Harry Potter. When Harry Potter started his 7th year at Hogwarts School of Witchcraft and Wizardry, it was apparent straight from the beginning that the year was going to be unusual. 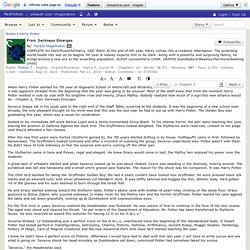 Most of the staff knew that from the moment Harry Potter walked in side by side with his longtime rival and enemy, Draco Malfoy. Nobody realized how much of a sign this new alliance would be. –Chapter 2, From Darkness Emerges Severus Snape sat in his usual spot to the right end of the Staff Table, scowling at the students. It was the beginning of a new school year already, the only pleasant thought on his mind was that this was the last year he had to put up with Harry Potter. Seated to his immediate left were Remus Lupin and a newly-exonerated Sirius Black. After the new first years were Sorted (Slytherin gained 6), the 7th years started drifting in by house. The Slytherins came in twos and threes, regal and elegant. A great deal of whispers started and when Severus looked up he just about choked. "Yes Albus? " One Stupid Person Chapter 1: The Plan, a harry potter fanfic. Union of Doom Chapter 1, a harry potter fanfic. A/N: Dear all, I'm back with my third Snarry fic which follows a Harry-and-Severus-are-forced-to-marry-each-other plotline. 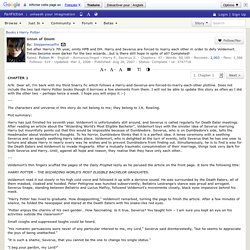 Does not include the two last Harry Potter books though it borrows a few elements from them. I will not be able to update this story as often as I did with the other two – perhaps twice a week. I hope you will enjoy it :-) The characters and universe in this story do not belong to me; they belong to J.K. Rowling. Plot summary: Harry has just finished his seventh year. Voldemort's thin fingers scuffed the pages of the Daily Prophet lazily as he perused the article on the front page.

Voldemort read it out slowly in his high cold voice and followed it up with a derisive sound. "Harry Potter has lived to graduate. "Potter enjoys the charms of his own gender… How fascinating. Small coughs and suppressed laughs could be heard. "It is such a shame, Severus, that you cannot be the one to change his single status. " "I beg your pardon, my Lord? " One Stupid Person Chapter 1: The Plan, a harry potter fanfic.

Until Death And After Chapter 1: The Funeral, a harry potter fanfic. Disclaimer: I don't own anything Harry Potter A/N: This IS a HP/SS Fic. 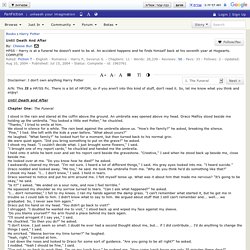 There is a bit of HP/DM, so if you aren't into this kind of stuff, don't read it. So, let me know what you think and enjoy! Until Death and After Chapter One: The Funeral I stood in the rain and stared at the coffin above the ground. I lifted my head up and started to rub it. Kestrel Chapter 1, a harry potter fanfic. Title: Kestrel Author: Lomonaaeren Pairings: Harry/Snape, past Harry/Ginny Rating: PG-13 Warnings: DH SPOILERS, including the epilogue. 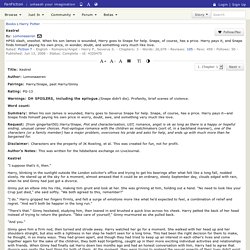 (Snape didn't die). Word count: Summary: When his son James is wounded, Harry goes to Severus Snape for help. Request: (from gingertart50):Harry/Snape, Plot and characterisation, UST, romance, angst is ok as long as there is a happy or hopeful ending. unusual career choices. Disclaimer: Characters are the property of JK Rowling, et al.

Author's Notes: This was written for the hdsbeltane exchange on LiveJournal. Kestrel "I suppose that's it, then. " Harry, blinking in the sunlight outside the London solicitor's office and trying to get his bearings after what felt like a long fall, nodded slowly. Ginny put an elbow into his ribs, making him grunt and look at her. "I do. " "There's that. " "And you. " Ginny gave him a firm nod, then turned and strode away. But all of that was in the past and Harry was— Free? Crumbling Pedestal Chapter 1: Prologue, a harry potter fanfic. Title: Crumbling PedestalWarnings: Slash, brief het, time travel, the founders, moderate super! 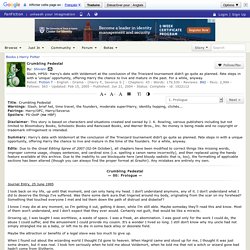 Harry, identity hopping, clichés...Pairings: Harry/OFC, Harry/SeverusSpoilers: PS-OotP (no HBP) Disclaimer: This story is based on characters and situations created and owned by J. K. Rowling, various publishers including but not limited to Bloomsbury Books, Scholastic Books and Raincoast Books, and Warner Bros., Inc. No money is being made and no copyright or trademark infringement is intended. Summary: Harry's date with Voldemort at the conclusion of the Triwizard tournament didn't go quite as planned.

Edits: Due to the Great Editing Spree of 2007 (02-04 October), all chapters have been modified to correct things like missing words, improper comma usage, choppy sentences, and cardinal sins (i.e. spelling a canon name incorrectly), and then replaced using the handy feature available at this archive. Crumbling Pedestal— 00: Prologue —